Today has been a great day! This morning, after a month of planning, Roger and Mary Peach, from Wichita, Kansas, arrived safely with precious cargo—Miss Dee and Mr. R.! 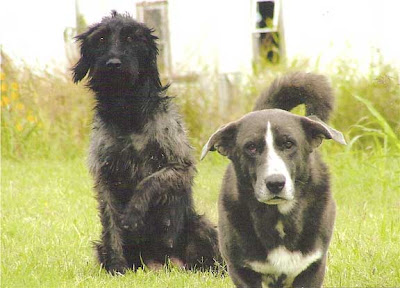 In early November, I received an urgent phone call from Roger, about these two dogs. Near the end of our conversation, I gave him my e-mail address and this is what  he e-mailed to me:
"Please take a minute to read about R & D, [ they lived in a field behind a place named R & D Camperland] these dogs have went from being impossible for animal control to even get near, let alone catch, to living in our garage for the last two months. This has been the longest, most expensive and most time consuming rescue we have ever done, and of course the pain of watching these dogs suffer through all kinds of weather. R is the male Basset mix, unfortunately he was hit by a car just a few weeks before we were able to get him, he needs surgery, but we can't afford to have it done. We have had both of them sterilized and Rabies shots. We have six rescue dogs so we are way over what the law allows. They have been introduced to our dogs and are doing a good job of adjusting. Neither one of them are vicious toward people, they love a good back scratch or belly rub. We can't keep them, but we don't want to see R euthanized, we have put ourselves in a very difficult position, if somebody reports us we will be forced to make that decision about R that nobody wants to make. We are willing to travel at our expense. I am well aware of the strain the economy has put on shelters, but we are looking for that organization that can make room for one or two more dogs. At the bottom of the enclosed attachment is some pictures of them.
Thank you,
Roger and Mary Peach
Wichita, Kansas" 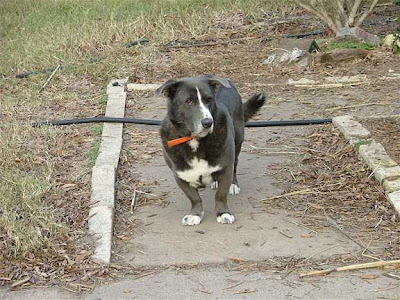 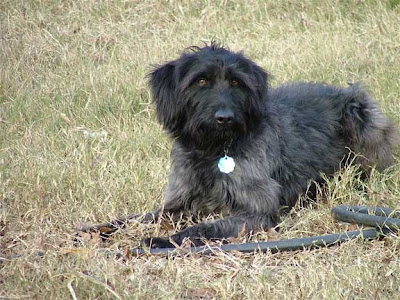 Roger's letter touched my heart, so I showed it to Tony, and then we had a lengthy discussion about these two dogs. Two days later, I sent Roger an e-mail, telling him that we would take their rescued dogs. Since that day, Roger, Mary and I have stayed in touch with each other.
This morning when they arrived in their van, Tony put Mr. R. and Miss Dee in Beckham's old pen. Then they went to the barn with Tone, to help him unload a large sack of dog food, dog treats and vitamins, that they donated to us. When I walked up to greet them, we talked about their six hundred and fifty mile trip, and then they told us more about the dog's history.
Then we took off to Miss Dee's and Mr. R.'s pen, so I could meet them, and give them some hot dogs. I fell in love with the dogs the second that I saw them! As we petted the dogs, Roger and Mary told us that probably the best home for them would be a home without cats. They don't know how they would do with children, and they are house broken. They think Mr. R. is about three to four years old, and Miss Dee is two to three years old. And, the best news was Mr. R.'s leg has healed and he is using it! Mary and Roger are hoping that they can be adopted out together, but they understand if that is not possible. I promised them that I would do my best to keep them together, since all that they have been through.
Tony and I had a fun visit with Mary and Roger inside the trailer, and outside in Outer Space. They left around noon, so they could head back to Wichita, Kansas. During lunch, I told T. that I really liked Mary and Roger, and I could not believe that they had done so much for those two dogs, over the past two years, and then driving them all of the way down here, so we can find them a forever home. That says a lot about them in my book. It's weird Tone, do you know that everyone that we know from Kansas, the Peach and Plaster families, are great people and animal lovers. Those two dogs are great, and I hope that we can find them their forever home, real soon."
After cleaning up the kitchen, I asked Tony to help me get a splinter out of my thumb. "I think I got it yesterday, but I'm not sure. My thumb is throbbing!"
"Nance," Tone said. "I can't see worth a darn. Put a potato on it."
"Put a potato on it?"
"Yes, it will pull the splinter out," Tony said, as he sliced off the top of a red potato. "Here, put this on your splinter." I put the spud slice on my thumb, and kept it there for over an hour. The splinter is gone!
Y'all have a great evening!
Posted by cousin nancy at 7:04 PM

You have a interesting blog
great photos

Wow Nancy, this is an incredible story.
Look at Mr. R.! Another "low rider", with those wee legs! So happy he's healed. Miss Dee is absolutely gorgeous, what a pretty gal.
The amount of dedication to rehoming these dogs is really overwhelming. Congratulations to all involved, I hope the final step in finding them a forever home comes very soon.

Good morning Old Geezer and Fay! Thank y'all for your comments. When Mary and Roger were here, they gave me all of the vet records on Mr. R. and Miss Dee, and Mary gave me two photo albums, with the dog's stories, to give to the lucky people who adopt these sweet dogs.

In the albums are pictures of them searching for food in a snow covered parking lot, their hiding places, etc. The pictures made me cry, because I cannot believe what these poor dogs went through. And, I am totally amazed with Mary's and Roger's dedication and kindness towards these two abandoned dogs.

I hope that they do get adopted out together. Roger told me that when they first got Miss Dee to get in their van, using salami slices, Mr. R. got really upset and started barking, but because of his injured rear leg wouldn't or couldn't get into the van. When Roger and Mary started to take off, Mr. R. started chasing after their van!

They stopped, and Roger made a step our of a box, to help Mr. R. get into the van, and he climbed inside. Mary gave me copies of the dog's two year saga, with pictures, and it is over five typed pages! Those dogs would never have survived if not for Mary and Roger.

Tony just walked inside and told me that Mr. R. and Miss Dee, were glad to see him this morning, they ate all of their food, and seemed happy!

I just walked six miles, and as soon as I get cleaned up, I am going outside to visit with our two new dogs from Kansas.

P.S. Mr. R. is one of the cutest 'low riders' and you can tell that he is protective of his Miss Dee, who is beautiful and very feminine. I think they make a darling couple!

Great story and they are great people like you and Tony!!I too pray that some nice people will adopt both of these dogs-they deserve to stay together forever. Karen C from PT. Arthur

Hi Karen! They are great dogs! I hope they get adopted out together soon, too! Thank you for commenting.

You all's compassion for these animals overwhelms me! Keep up the great work and may the God of your choice bless you!

Hi Loancougar! Thank you for your comment. We know that we are blessed, because we get to help the dogs and animals, that can't help themselves. It is so rewarding!

Please help us find the most fantastic forever home for these two super dogs, because they deserve the very best after what they have been through in the last two years!

P.S. We will gladly fly them anywhere! And,always remember that Dogs Rule!

Dogs may rule, but Cats are the power behind the powers! :)

Do you have a facebook page? I couldn't find it! If you don't have one, join up....you'll have a ton of exposure for the rescue place! I will surely promote it if you add me as a friend once you're signed in!___Chumbe Salinas

Hi Loancougar! I am with you—Dogs may rule, but cats definitely are the power behind the powers, and we have Lucky, our three legged cat to prove it.

We don't have a Facebook page, yet. The last time that I got on Facebook, I had thousands of people within a few hours wanting to be my friend, and it was over whelming to say the least. I will try it again, but for our rescue ranch, not me. Thank you for your comments.

Mary and I were so worried about leaving Mr.R and Ms.D with anybody. We just knew that nobody would see R & Dee the same way we do. I met Tone when we first came in and had talked to Nancy several times on the phone. These were the kind of folks we were looking for! We shed some tears when we had to part ways, but we were happy that these two were going to get good care and a loving family. Thanks to everybody who makes Utopia Animal Rescue the great place it is.
Roger and Mary Peach

Hi Mary and Roger! I am so glad that y'all made it back to Wichita, Kansas okay! Roger, I enjoyed visiting with you tonight on the phone and talking to you about Mr. R. and Miss Dee.

Your babies are doing fine here, and I promise that they will be loved and taken care of, and will find their forever fantastic home really soon!

God bless y'all for helping those who can't help themselves. You are truly angels from Kansas, and I am so glad and honored, that I got to meet you and Mary and shake your hands. Thank you so much for what y'all do for the homeless animals in Kansas. The world needs more people like you.