Talk About Some Karma!

Today has been really awesome! This morning Kinky called me right after I had walked six miles with Leslie Sansone. He invited me to come over to the Lodge and drink a cup of coffee with him. As I was putting on my jacket, Tony came inside the trailer and told me that we had eight dog walkers outside walking our dogs! "Lisa, Matt, John and Meghan, and June, Ellen, Jim and Eileen!" Tony said, smiling ear to ear. To say the least, I was thrilled!

"Hi Kinky," I said, as I walked into his kitchen. "If you want to get yourself inspired, you need to come over to the rescue ranch. We've got eight dog walking volunteers over there walking our dogs!"Kinky's face lit up like a Christmas tree! He was all smiles. "I mean it is totally awesome seeing all of our dogs coming in or going out of the ranch with their tails wagging wildly. You've got to see it to believe it!"

"Nance, that is fantastic!" Kinky said.

"I know! Thank goodness for Lisa, Matt, Meghan and John, and Ellen, Jim, June and Eileen!" Then I had to make a confession to Kinky. "Kinky, I owe you a can of pepper. It's not empty, but close to it."

"Yesterday morning when Ben arrived, he and I were talking about Mr. Magoo dying and his beautiful grave covered with all of his toys. Ben told me that he hoped his dogs wouldn't steal the toys, so when I went over to check on the Friedmans and feed them, I took your can of pepper outside and poured it on Goo's toys, so Valerie and Penny wouldn't mess with them." Kinky smiled, and then I followed him outside to show him the spiced up toys.

"Thanks Nance, but you really didn't have to do that. Gooie liked to share. It's fine if Penny and Valerie want to play with his toys. Gooie would like that and..."

Ten minutes later, I was back over at the rescue ranch visiting with our fantastic volunteers and thanking them for coming out to walk our lucky dogs. It was sort of funny, because every time I thanked one of them, they'd thank me back for letting them come out to walk our dogs. They told me it was a priviledge for them to get to do it! Twenty minutes later, Kinky showed up at the rescue ranch to thank and visit with our great volunteers, and every time that he thanked one of them, they thanked him back, too!

For lunch I starting cooking Julia Child's Cream of Mushroom soup recipe, while Tony teased me nonstop about him 'starving to death' and asking me how much longer it would take until he could eat. Ben didn't help because he would laugh every time Tone teased me, and get me to laughing with his funny wisecracks.

Two minutes before I was ready to serve the soup, there was a knock on the door. Tone went to the door to open it for Eileen. She told Tony that she had let Chase off leash so he could swim and she couldn't catch him because he was happily running up and down the side of the creek! Tony told her not to worry and then he took off in Kermit to catch Chase Manhattan, who is bigger than a bank.

"Well Ben," I said, before I started laughing, "talk about some karma. The soup is finally ready and Tony is not here." Ben started laughing with me. We thought about playing a joke on Tony, but decided it would be in bad taste, so we didn't.

Ten minutes later, I served up the soup to the guys, and it was absolutely delicious! Ben and T. told me it was the best Cream of Mushroom soup that they had ever eaten! I loved their compliments and was glad to know that Tone wasn't going to starve to death as he had earlier predicted.

After lunch, Tony went to get the mail while I cleaned up the kitchen and visited with Ben. When Tony returned with the mail he said, "We got our new AARP membership cards." Ben started laughing! 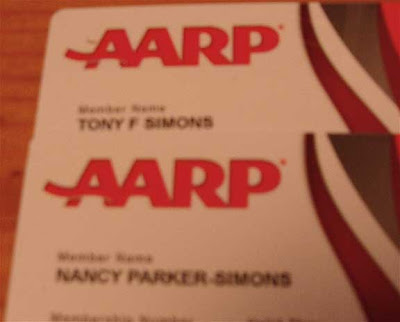 When I opened up Jimmie and Nelda Dunn's holiday card. I loved the card and their sweet note to us, and the picture they sent to us of their two dogs Miley and Marlow, that they adopted last December! 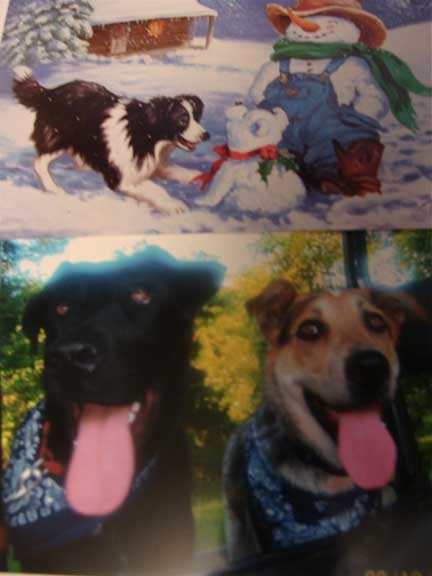 We also got a cute card from our good friends, Karen and (H)erb Cares and it made us laugh! I love it! They designed it using one of their dogs, and on the inside of the card is a picture of them standing beside Willie Nelson, that reads: "Bona Fide! Happy 2010!" 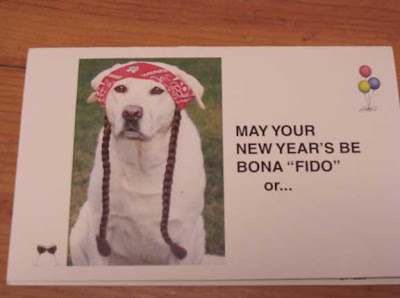 Around five o'clock Ben and I went over to the Lodge to visit with Kinky. The three of us took a short hike with the dogs, and then we returned to the Lodge. Tone showed up at six o'clock, and before he could sit down at the kitchen table Kinky challenged my Medina Bulldog to a game of pool.

Y'all have a great evening!
Posted by cousin nancy at 8:16 PM

I watched some of the videos with Mr. Magoo, what a fun energetic little guy. When I read about these great folks walking the dogs, I wondered if Mr.Rogers had made any progress with walking on a leash. Medina Bulldog, good job, I'm sure the Hummingbird Man is wanting A rematch.
Roger

Great cards you received, I love the dog photos! Thanks for sharing them.

We found those braids and bandana on Willie's website. Glad to see Whiteley ("Fido")made your blog. That's an all-time high in his little canine life.
Love
'Erb and Karen