At seven-thirty this morning, Tony went out to the barn to get the groceries for our dog's Christmas dinner. Then it was my turn. I filled up four large aluminum roasting pans with mixed vegetables and put them into the oven to heat. I used a large pot to heat the rest of the vegetables on the stove top. Then I filled up two big pots with olive oil and started simmering it, so it would be hot when we added it to the mixture in the three buckets.

When Lisa arrived Tony put her to work immediately, while he opened up the ground turkey packages, Lisa added the large bags of cheese as Toto stood by and closely supervised her. 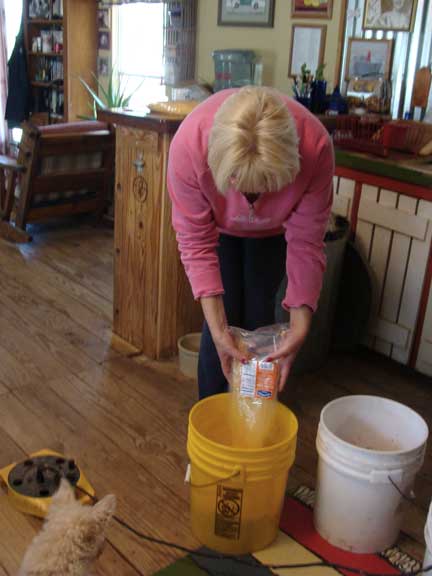 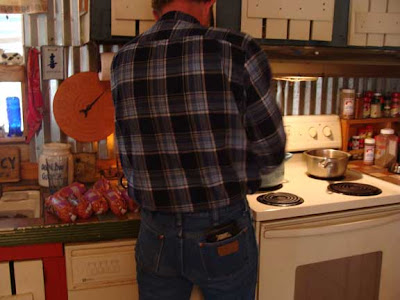 Then Tone added the stuffing, ground turkey, eggs, minced garlic, mixed vegetables and hot olive oil and then he began mixing up the dogs hot Christmas dinner in the buckets! I knew we were almost ready to go outside and feed the dogs, so I called Kinky. "Kink, we're just about ready to feed the dogs," I said, as the high powered electric drill used to mix up the food, whined loudly in the background.

"What? Where are you? I can hardly hear you..." I stepped outside on the porch.

"I'm sorry," I said. "That was the drill. Tony is mixing up the hot dinner right now. We're ready to serve our dogs their Christmas dinner!" Three minutes later Kinky arrived in Mr. Green Jeans and the feast began outside!

Tony, Lisa and Kinky grabbed the heavy buckets of hot food and took off to feed our dogs! Tony and Lisa began feeding the excited dogs on the east side of the rescue ranch, while Kinky started feeding the dogs on the west side. Here is a picture I took of Kinky feeding Pearl, and then taking off to serve her roommate, Laz! 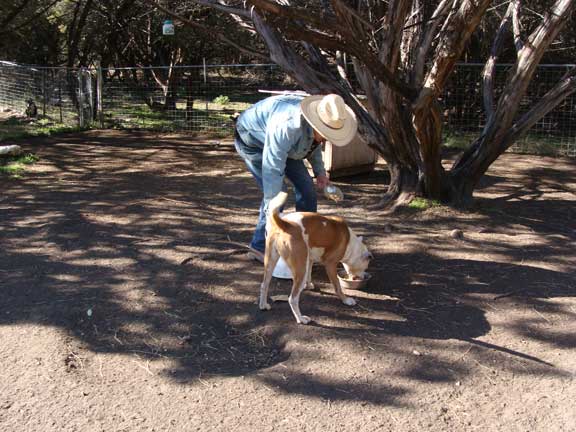 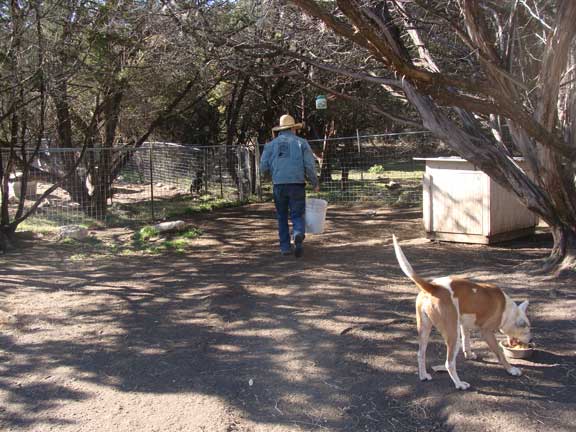 Twenty minutes later, you could have heard a pin drop, because all of the dogs had been fed their delicious holiday meal! Then Lisa, Tony and Kinky retraced their steps and served up seconds to all of our dogs! And, the dogs licked their bowls clean both times!

While Tony and Lisa cleaned the pens, I came inside. First, I cleaned up the kitchen, and then I started preparing our Christmas dinner as my iPod played my favorite tunes from our Bose dock. Here's a picture that I took from the kitchen window of our 'elaborate' table setting. 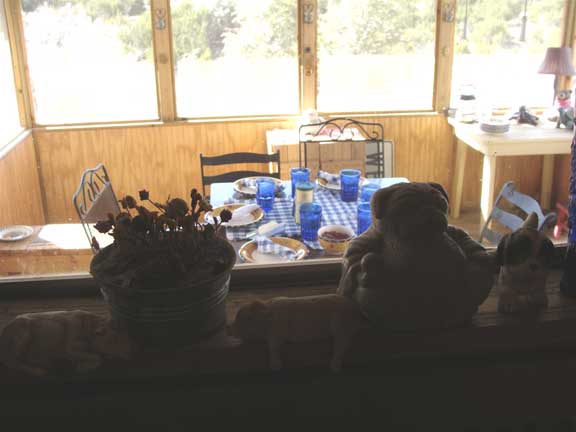 At two-thirty Tone and I went into Outer Space and enjoyed our holiday dinner with Lisa, Melody, Copper Love and Kinky even though it was a little bit cold outside! Everyone at the table was wearing one to three layers of clothing as the temperature outside slowly inched its way up to fifty-six degrees. Copper and Lisa were really bundled up, too. Their outfits included pretty mufflers wrapped tightly around their necks, and I loved the knitted purple wool, pull-down cap Copper wore!

Fortunately, no one was shaking from the cold, as everyone ate their dinner. Kinky teased me about us eating outside and I told him, "Kinky, our kitchen table is covered up with all of my book stuff, and besides it isn't big enough for six people." Our meal was delicious except for the wheat rolls, because like always I had over baked them. They were so hard and brittle, they made Kinky laugh out loud when he tried to break one open and it shattered into a million tiny pieces on his plate! "Great rolls, Nance," he laughingly remarked, as the wind blew the bread crumbs off of his plate onto Copper's plate and muffler.

"I know," I said. "I fondly call them 'My Food for Thought Rolls,' Kink. You see, the minute you think about eating one of them they vanish into thin air. Think about it." Tony started laughing and bread crumbs flew out of his mouth and found immediate shelter on Lisa's white muffler, which instantly made it look like Lisa had just returned from a blinding sand storm! Fortunately, she didn't notice and I kept my mouth shut.

Following dessert, we went inside the trailer to warm up. As we defrosted in front of my laptop computer, we watched Susan Boyle's incredibly great April '09 debut performance on England's Got Talent and there wasn't a dry eye amongst us.

Y'all have a great evening! Happy Holidays!

56 degrees---that's positively tropical! Try single digits, with wind-chill added. At least the snakes were gone for the Texas winter.
Anyhow, glad to see you had a nice Christmas, and wish we were with you.

Mary made Christmas diner for our six heathens, Mary fed three of them outside and I fed the other three in the kitchen, Turkey, dressing and gravey took at least ten seconds for these guys to consume.......

Nancy writes "Tony started laughing and bread crumbs flew out of his mouth and found immediate shelter on Lisa's white muffler..." Now it's my turn to laugh out loud!
Great Christmas blog Nancy, I love hearing about the wonderful meal you make each year for the dogs.
Enjoy your weekend,
Fay xo