What Are You Doing?

This morning, Tony and I went to Wolfmueller's Books, so we could meet up with Mari, of the famous NoMads, because she wanted to give me Witch Hazel, her old Dyson 'Animal' vacuum cleaner, that had quit sucking! She knew I loved Hazel, my Dyson 'Animal' vacuum, and she told me I could use hers for parts.
Tone and I arrived at Wolfmueller's a little early, so we visited with Jon and Mary Jo. While Tone was talking to Jon, I went over to their cookbook section and started browsing. When I saw Julia Child's Mastering the Art of French Cooking, I pulled it off of the shelf! "It's on sale, Nancy," Jon said, as he walked past me. One minute later, I was at the counter, writing a check for it! I was thrilled to get it!
After buying the cookbook, Jon took us to see their new bookcase. It was beautiful! As I admired the antique bookcase, Tony was in the background grumbling about me fixing French food to Jon. "Nance is a great cook, and I wish that she would just stay with her own recipes..." Here's a picture I took of the bookcase and Jon's head. His head is on the top shelf on the left hand side. 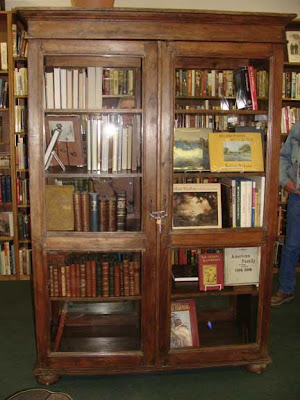 "Mari is three minutes late," Jon said. "Why don't you tease her, and tell her that you had to buy this book, because she was late, because you felt bad about hanging around the store!" We all laughed. Then Mari arrived!
After handshakes and hugs, we had a fun visit with her! She is one of the nicest people that you could ever meet, and T. and I just love her. When I showed Mari my new Julia Child cookbook, and told her about how much I loved Julie & Julia, I said, "Mari, why don't you and me take turns cooking her recipes, and do a blog about it?" Tone's smile went south. "You could do it one day, and I could do it the next?"
Mari shook her head, "No, I don't think I want to do that." Tone's upside down smile went north! "That's your necklace, the one that you have been blogging about! It is more beautiful in person. I love it!" Before Mari, Tony and I went outside to adopt Witch Hazel, I told Mary Jo, Jon, Mari and Tony that I was going to definitely try to cook at least one meal from Julia's cookbook, and when I did, I wanted all of them to come out for dinner, to try my French cooking. For some reason they all laughed. Then we went outside. Tony took these pictures of Mari and me with Witch Hazel: 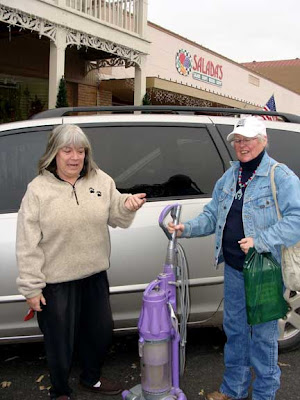 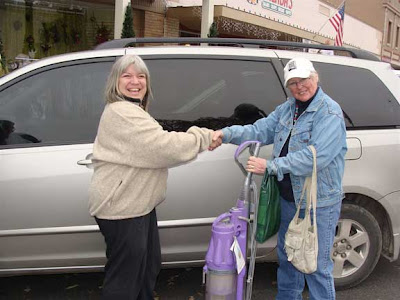 After we left Wolfmuellers, we went and grabbed a bite to eat, and then we went to Walmart. As we were checking out, I noticed the Julie & Julia DVD for sale, at the checkout counter, so I picked one up and added it to our cart! When we got home, I took this picture of my two new Christmas presents, while Tone went outside to get Witch Hazel for me! 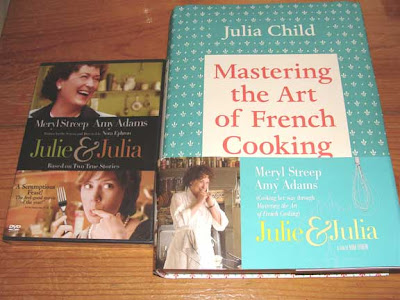 When she came inside, I immediately went to work on her. The first filter that I removed, several small rocks fell out onto the floor! Then I removed several other parts to check for clogs. When I was done with all I could do, Tony took over. In less than two minutes, he had her running better than my Hazel! I was thrilled! I am now the proud owner of two Dyson 'Animals! And yes, I am bragging! Thank you, Mari! Before putting the twins in the closet, I decided to do a short video clip, to show Witch Hazel in action! "Tony!" I half-hollered, down the hallway. "I'm going to do a short video, and I need for you to help me!"
"Okay!" Tone said, loudly. "I'm nearly done plowing! I'll be there in just a minute!" Three minutes later, when T. came into the kitchen, he saw me pouring a pile of white flour on the painted rug in our kitchen. "What are you doing?"
"The Flour Test!" I said. "I want you to vacuum up the flour, so everyone can see Witch Hazel in action! When I say action, turn her on and let her go to work. Action!" Witch Hazel's Flour Test! After Witch Hazel passed her test, I put the sisters in the closet so they could visit.
At one-thirty, Lisa and her friends showed up to walk our dogs! It was about forty-seven degrees outside and misting, not my kind of weather, but they didn't seem to mind! Before these great people started walking our dogs, Tony and I thanked them and then I shot them! From left to right are: Kevin, Matt, Lisa, Nicole, Ty and Meghan! 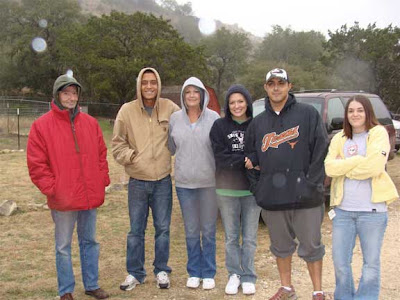 Two hours later, Lisa, Matt and Kevin came inside the trailer, and they were wearing smiles, and soaking wet! "Nicole, Ty and Meghan just left," Lisa said. "I wanted to let you to know that we almost got everyone walked and..."
Tony and I were thrilled for our dogs, to say the least, and we thanked them. I love these people, and am pretty sure that they are angels in disguise! They have to be! We had a fun visit with Lisa Matt and Kevin and mainly talked about our dogs. Before they left to go back to Kerrville, Matt told me that he loves Tom Landry, and he might be able to adopt him soon, if everything works out all right! I'll keep you posted.
Y'all have a great evening!
Posted by cousin nancy at 6:07 PM

I hope you will hear from Ron and Susie about how Marcus and Clark Kent are doing together. I loved that little small, stocky dog and so I am interested in how he is doing in his new forever home... Thank you again for being there for these beautiful animals that you and Tony have rescued.You deserve only the best things in life-May God bless you always. Also, I love your blog each day and smile reading what you are doing everyday. Keep up you blogging-its great!

Awesome blog and video Nancy! I always knew you were a Flour Child ; )) Have a great weekend!
Fay xo

Good morning K. and Fay! K., no news is good news about Clark. I plan on calling them this week, to see how things are going and will let you know. I love Clark Kent, too and can't wait to find out what Marcus named him. Thank you for your kind remarks.

Fay, thank you for making me laugh! Flour Power!