Today was great until I fixed lunch!
This morning I overslept, and I didn't have time to walk with Leslie. I'm blaming it all on the full moon. While Ben and Tony did their chores outside, I caught up with my paperwork.
At eleven-thirty, I decided to fix my garlic cheese quesadillas for the dogs outside. I had only cooked up a few when Tone came inside and told me that he wanted to shoot me. After a little coaxing from T., I let him shoot me. Here are three short video clips of me cooking quesadillas for our dogs, and the other two are our dogs being fed the quesadillas:
My First & Last Cooking Show
Tom Landry & Buffalo Gal Being Served
Lobo, Layla, & Marlin Being Served
Well, I hope my cooking show made you laugh out loud, because I looked like an idiot, again. And, I hope watching the dog's being served, put a smile on your face.
This afternoon, after feeding the quesadillas to the dogs, I decided to feed Tony, Ben and me. I went through my cookbook, and decided to make Zucchini-Feta Pancakes, while Ben and Tony worked outside.
I was nearly done putting together the ingredients for the recipe, when Tone and Ben came inside the trailer, because they were 'starving.' While the three of us visited, I finished mixing all of the ingedients together. Here is a picture of the mixture: 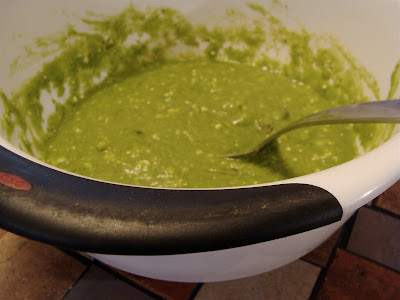 Yes, I know it looks like green mush, because the guys teased me about it. When I spooned the mush into the frying pan, Tony's and Ben's eyes got big—it was not a pretty sight! 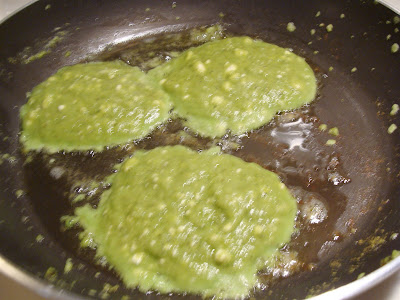 As my green mush pancakes cooked in the skillet, Tony and Ben started talking about not being hungry anymore. "I'm sorry, Nance. I'm not going to eat that stuff," Tony finally said. I could tell that Ben was thinking the same thing, but he was too polite not to say anything.

When I tried to flip over the green and white speckled blobs—they fell apart, which made the guys tease me some more, so I decided to just scramble them, like I do scrambled eggs. When they were cooked, I put some on a plate, and offered to be the guinea pig, and taste it first.

As Ben and Tony stared at me with serious faces, I took a bite. OMG! It was horrible! As I tried to spit out the nasty stuff, Tone and Ben burst out laughing, which made it hard for me to remove the green goo from my mouth, because I was laughing, too! Finally, after washing down our wannabe lunch, with water, I said, "I think I must have left something out of the recipe, because y'all distracted me or maybe because of the full moon. Here, y'all give it a taste."

The men refused to taste it, and I can't tell you what they said, but it was pretty funny! As I dumped out the bowl of green mush into the trash can, I laughingly said, "Quit laughing, Tony. This recipe was costly. I spent six dollars on the feta cheese, a couple of dollars on the zucchini, I used four eggs, the ground mint cost four bucks and..."

"Nance, can you make us some of your beans and cornbread?" Tony asked.

Y'all have a great evening!
Posted by cousin nancy at 7:02 PM

Cousin Nancy,
Did Princess get adopted today and what about Clark Kent and Scooby Doo? I hope they found a forever home but even if they haven't found their new home yet, I know they are doing great living at the rescue ranch. That was such a neat thing you did for the dogs feeding them garlic cheese quesadillas-you are the neatest people in the world. May God bless you all and your rescued animals.