Today has been a great day and I will tell you all about it after I backtrack to what happened on Christmas Eve.

Last Tuesday I received a call from Nell, U.S. Representative Lamar Smith's daughter. She had rescued a dog roaming the streets of San Antone and she did not want to take it to the pound, because she was scared that the dog would be euthanized because it was a Pitbull. I told her we would take it.

Christmas Eve morning Nell called to tell me that she had gotten the dog spayed and given all of her shots, and she asked if we could take the dog later in the day. I told her we could.

After we got off of the phone, I went over to the Lodge to see Kinky. "Well Kink, guess who is coming out to the ranch late this afternoon?"

"Lamar Smith! His daughter Nell rescued this dog and..." Kinky was delighted that we were taking in a Pitbull, and that he was going to get to see his good friend Lamar.

Lamar and Kinky showed up at the rescue ranch around four-thirty, with precious cargo in the back seat. After handshakes and hugs and admiring the dog I said, "Kinky I've just named her. Her new name is Nellybelle. She sure is one beautiful dog!" Tony, Lamar and Kinky liked Nellybelle's new name and I think that she did, too.

This afternoon around four-thirty Lisa's friend and dog walking volunteer, Kevin, came out to adopt the dog that he had bonded with—Chase Manhattan! When Tony put a leash on Chase, as Kevin filled out the adoption papers, Chase was even more excited about being adopted than Tony or me! He finally had found his forever home in Houston! I took these pictures of Chase. The first one is of him waiting on Kevin, his best friend, to finish the paperwork. The second picture is of Chase sitting in the backseat ready to leave the rescue ranch. I've titled it "Car Chase!" 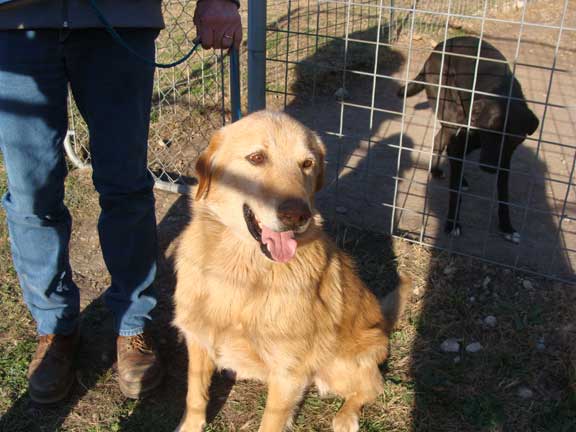 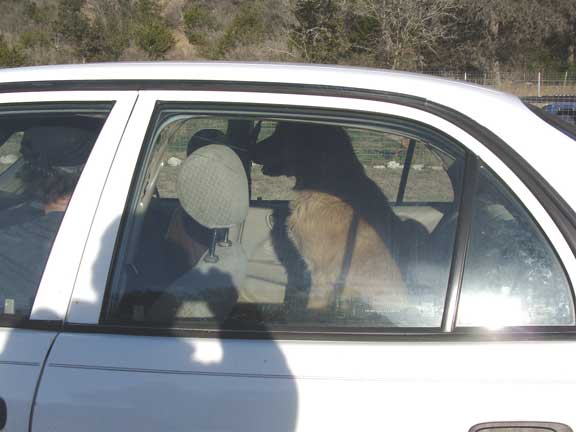 After Kevin drove off with his new co-pilot, Chase, Tony and I went to Nellybelle's pen, so I could take a picture of her, so Pat could post it on Utopia's web site. Nellybelle was so happy to see us, I had a heck of a time trying to shoot her though. Every time just before I snapped a picture of her, she would move. It took twenty-eight pictures to finally get a good shot of her. Here's the one that is going up on utopiarescue.com. 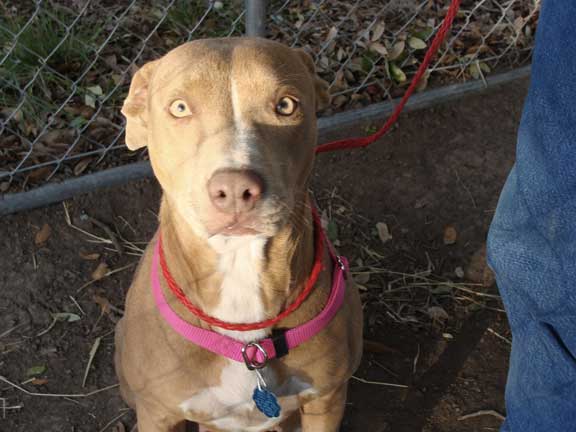 Isn't she beautiful! She is approximately three years old and there is not a mean bone in her body. Here's  an action picture that I took of her before I got the one above. I've titled it "Just Another Mick Jagger Impersonator"or "Gimme Shelter." (BTW: that is Scooby Doo and Jill in the background.) 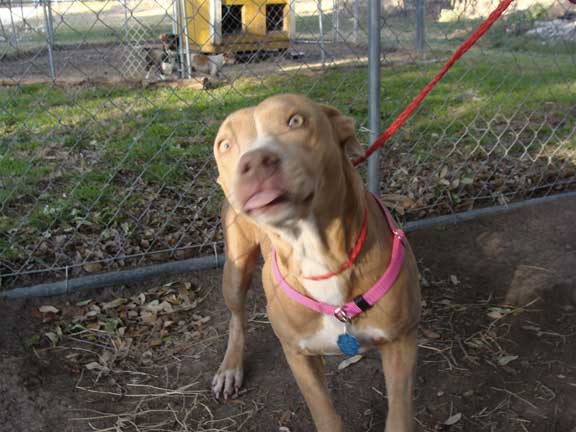 Around five o'clock I went over to the Lodge to visit with Kinky. As we played a game of pool, I told him the good news about Chase Manhattan's super adoption, and Kinky was thrilled about Chase finally getting a forever home. We've got our fingers crossed for him.

Another good day at the Ranch! Chase is a great looking dog, and the Pit Bull is too. Those dogs have an undeserved reputation.

Chase got adopted! I'm so glad, but I will miss him when I start walking dogs again. He has such a great smile, and he is so HANDSOME.

Nellybelle is such a sweet name. She looks like a dog that I would love!