This morning after walking six miles, I took care of some paperwork and returned phone calls, while my beans simmered in the crock pot. When Tony came inside the trailer, after doing his morning chores, I told him that we were having beans and cornbread for lunch, and his eyes lit up—he was thrilled!

"Those are the best beans that you have ever made!" Tony said, as he served himself seconds. I don't know what I did differently to the beans this time, but I must admit that they really were the best that I have made in a long time.

This afternoon I cooked up some cheese and garlic quesadillas for our dogs outside. Lisa, Matt and Tony helped me pass them out, and as always our dogs loved them! It's definitely their favorite treat! After the dogs had gotten their snack, Lisa, Matt, Tony and I met up at Mr. R. and Miss Dee's pen. As Lisa tried to interact with the dogs from Kansas, I decided to rename Mr. R. because no one could remember it. "His new name is Mr. Rogers! Roger brought him to us, and it is a good name and it will make people smile when they meet him. I loved Mr. Rogers!" Everyone liked his new name, and it did put smiles on their faces.

A few minutes later, John, another great dog walking volunteer, arrived and we had a fun visit, before they grabbed their leashes, and took off to walk some more of our dogs!

Around four-thirty, Lisa, Matt and John came inside the trailer to tell us what a good time the dogs had had on their walks. We talked about our dogs and teased T. about his farming and his new nickname, Mr. Blue Jeans. Then I asked Tone to please get his laptop, and show them his squirrel picture. Like me, they loved it and thought it was great, too! 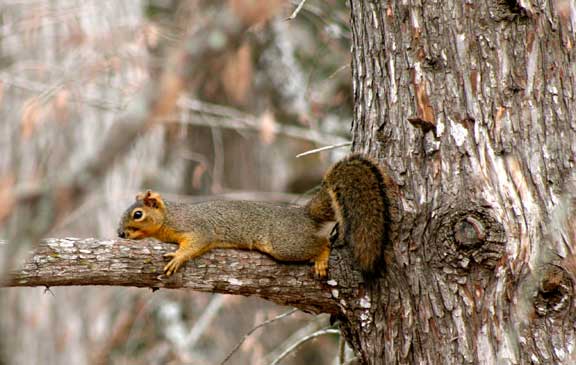 This evening, around five o'clock, Kinky called and invited us over to the Lodge for a visit. Yes, I went alone, again, because Tony needed to harvest one of his farms. Kinky and I had a fun visit, while we shot a round of pool.

Near the end of the game, after missing way too many shots, I finally caught up to Kinky, and only had one ball left on the table. He called the pocket for the eight ball, and I won by default! He sunk the eight and the cue ball! I couldn't wait to get home and tell Mr. Blue Jeans, so I left the Lodge a few minutes later.

Y'all have a great evening!
Posted by cousin nancy at 8:13 PM

Mr.R Knows his name, but Mr. Rogers should be easy for him to adjust to. I kinda hate to see the old name go. We gave those names to them so we could call them something besides the black dog and the gray dog, never thought anybody else would meet them, and moving to Texas would have been an offhand joke! He and Miss dee are going to make somebody really happy. It's definatly less hectic around here with only six dogs, but I still miss them. Drove down South Broadway today where they lived at, it was eight degrees last night, don't know how they survived those winters. Has Kinky met Mr. Rogers and Miss Dee? People aroud here remembered his name because nobody had ever known anybody named Mr.R.
Roger