Today has been great and I am on Cloud Nine as I type this. This morning when I was walking the last mile of my six, Tony and Lisa came inside the trailer so Lisa could give me Mark's package for me. I quickly put Leslie and crew on hold and then I opened up the package.

I first looked at the photographs which were all signed to me by the famous drummer Tommy Noland! Mark's friend, Tommy Noland, plays with Brian Austin and he usually tours and plays guitar in Clint Black's band. Then I realized why Mark had sent the pictures because there was a pair of autographed drumsticks signed by Tommy! "Wow, Lisa!" I said. "These are the best sticks that you can buy and mine are autographed by Tommy! Mark is so nice to have sent this to me. Maybe it will improve my drumming skills?" Then I admired the three really cool t-shirts from Mississippi. Thank you, Mark in Mississippi! I love the t-shirts, autographed pictures and drumsticks! You are too nice and please thank Tommy for me! 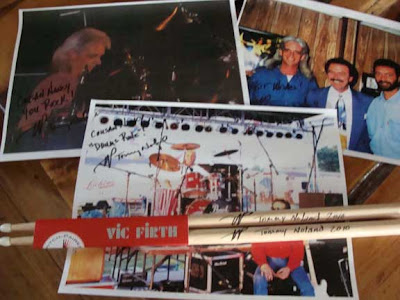 Tony, Lisa and I were having a fun visit until Matt came inside the trailer to tell Lisa it was time for them to leave because they needed to get back to Kerrville. After I gave Matt and Lisa a hug and thanked them for coming out, they said goodbye to us and left the trailer.
After lunch I took care of some paperwork and then I unofficially walked one hundred miles inside the trailer or should I say nervously paced back and forth as I awaited for the arrival of my book proof. Around two-thirty I told Tony that I was going to lay down and take a short nap because I was tired from walking and waiting.
At two forty-one Hank and Toto jumped off the bed and Mama and Abbie started barking outside and then I heard the front door open and close, so I got up in hopes that the UPS truck would be outside with my book. When I reached the door I saw the UPS man climbing back into his truck and Tony walking towards me with a package in hand. And he was smiling ear to ear!
When he came inside he handed me the package and said, "Here's your book. Open it." I took the package and set it down on the breakfast bar and just stared at it for a few seconds. "I'm scared to, Tone. What if it looks terrible and not what I expected." Then I took a deep breath and opened the package. Tears came to my eyes when I saw my book because it was beautiful! "Tony, it looks fantastic!" I said, as I picked it up and examined the back of the cover. "Look how good the back looks, too! I love it!"
Then I quickly combed through the pages checking to see if the Table of Contents matched the pages in the book and to see how the pictures turned out. The pages matched and were numbered correctly and the pictures looked great. I was so thrilled with my book I took two baby Aspirins just in case I stroked out from the excitement. "Tony, Let's go to Kerrville! I can't wait to show this to Sandy and Jon and Trisha! Then I called Sandy at Wolfmueller's Books and then Kinky to tell them about my book.
Five minutes later T. and I were over at the Lodge showing Kinky and Frank my book. To say the least Kinky and Frank loved my book and thought it looked great. "Kinky, it looks as good as my University of Texas Press book." Kinky agreed with me, and then I showed him the "UP" on the spine of the book. "That's my publishing company logo for Undepressable Press." Kinky smiled and nodded his head yes.
"Nance, your book looks fantastic," Kinky said. "I know that you're going to sell a lot..."
Five minutes later Tony and I were on our way to Kerrville to see Sandy and Jon, and then Trisha Sanders at Copies Plus so we could show them my book. Jon and Sandy told us that my book looked professionally done and they loved the cover as well as the printing inside. "I love 48hrBooks. They have been great to work with. There are a couple of things that I need to correct and when I called them about it they told me that was not a problem, and they would let me correct up to three things before charging me! Talk about nice people!"
"I found the first mistake on the title page," Tony said as he opened the book up to show them that I had left the "s" off of the word Texas at the bottom of the page. We started laughing. "I told her it was no big deal..."
"Yes, it is Tony. I also left out a word on the back cover and the title of my first book needs to be in italics," I said. "I can't believe that on the two most important parts of my book: the cover and title page I made those stupid mistakes. I guess I overlooked it because I have been too close to my book. Anyway we are fixin' to go see Trisha over at Copies Plus to ask her to correct my book cover and..."
"Nance, we need to leave and go see Trisha," Tone said as he got up from his chair. We said our goodbyes to Sandy and Jon and then we left the store.
When we showed Trisha the book she was as excited as me at how good it had turned out, and when she saw what I had written about her helping design the cover she was even more thrilled. When I told her about the needed corrections to the cover she quickly made them for me, including the apostrophe that needed to be added that her friendly employee suggested, and then Trisha e-mailed the new and improved version to me since my Mac can't read her CD's. After a fun visit with her we returned to the rescue ranch.
Tomorrow morning I plan to upload the corrections and then I will "push the button" for them to print my books. Here is a picture of the corrected book cover. Thank you so much, Trisha! 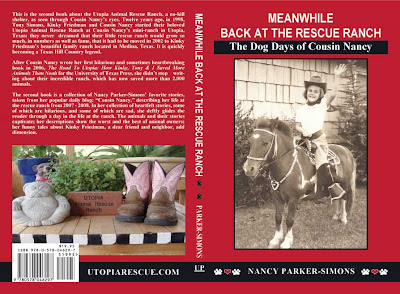 Nancy you are quite welcome hopefully i can met you in person one day soon, i will tell Tommy and log on to show him, well take care talk to you soon......Markyerch

Hi, Mark! Thank you so much for the care package! I am wearing the Mississippi Mud t-shirt today and have received many compliments on it. I have also tried out my Tommy Noland autographed drumsticks and I am actually playing better than ever before. It definitely did the trick. I love them! Rump-a-pum-pum...Please thank Tommy for me.

Nancy!!! congratulations! on finishing your hard work! many dogs will be honored, fed, loved due to your book. that big heart of yours is utterly perfect!