I got up early this morning and walked six miles with Leslie Sansone. Then I spent the entire morning catching up with my paperwork and then returning e-mails and phone calls while Lisa, Meghann, Matt and Paul were outside helping Tony. Thank y'all so much!

I received one funny e-mail from Ellen and I want to share it with you.
"A great blog! That may be my 2 minutes of fame. Wish you could have been there. The poor little guy
is scared of everything. If he was a "fear biter," we would be doomed. Culvert came out to extend "the glad paw of fellowship and Sandy hid behind my legs while Cully sniffed his back leg. He has finally quit trembling, just still pants a lot. He has sniffed Twinky's bum, but she doesn't know what to make of a dog that won't take charge and make decisions. They mill around together, but no play behavior yet. I think it will take 2 or 3 more days for him to relax enough for that. His aunt June came over for dinner and to help me help him settle in. She covered his head with kisses and we both petted and scratched and told him what a good, brave boy he is. We went in the house to get a glass of wine and when June went back out on the porch, I heard, "OMG, he's gone!" By the time I got to the door, we saw that he had stuffed himself into a soft sided kennel I had put on the porch for the cats. It's his safe place and that's where he spent the night. The other 2 cats have not been interested in making his acquaintance. This morning I had to hook up the leash to coax him out of his safe place and had a love fest while I drank my coffee....so far, so good.
Later
Ellen"

I think Sandy is the luckiest dog to have someone as kind, gentle and patient as Ellen and so does Kinky and Tone. Thank you, Ellen! Here are three pictures of Sandy with Twinky and in his safe place: 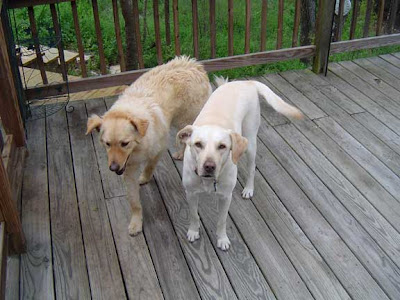 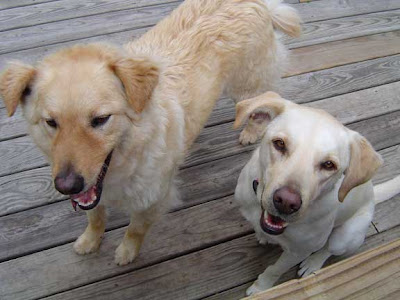 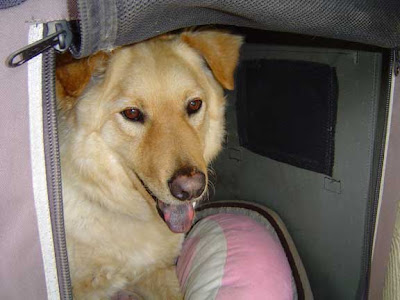 This morning I had a short visit with Lisa. She told me that something is coming my way from Mark in Mississippi  and that I am going to be really surprised. I tried to get her to tell me what it was but she refused to tell me and just laughed about it. Hmmmmmmmmm.......

Last week I received an e-mail from Craig Slovak our new friend and the General Manager at Republic Harley Davidson in Stafford, Texas. He wanted to invite me to their Grand Opening of their Kinky Friedman Cigar store that Kinky will be at on April 8th from 7:30 pm - 9:30 pm but as y'all know I won't be attending because of my fear of big cities. 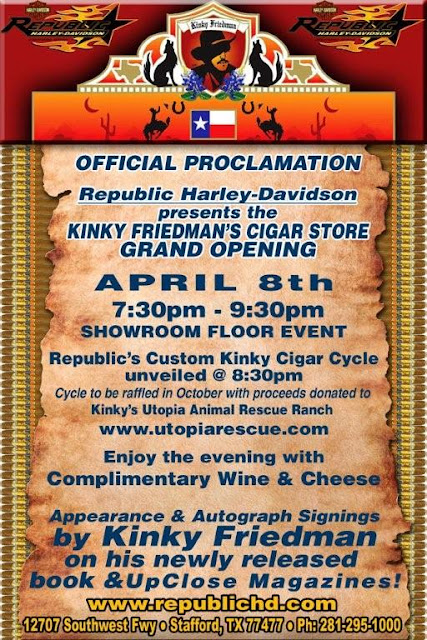 Craig told me that Republic Harley-Davidson is extremely excited about their April 24th "Ride for Harley" motorcycle ride benefiting our rescue ranch.  They have already partnered with Caliente Harley-Davidson in San Antonio as another sponsor where they will stop and pick up additional riders.  He told me that all registration fees will be donated directly to Utopia. 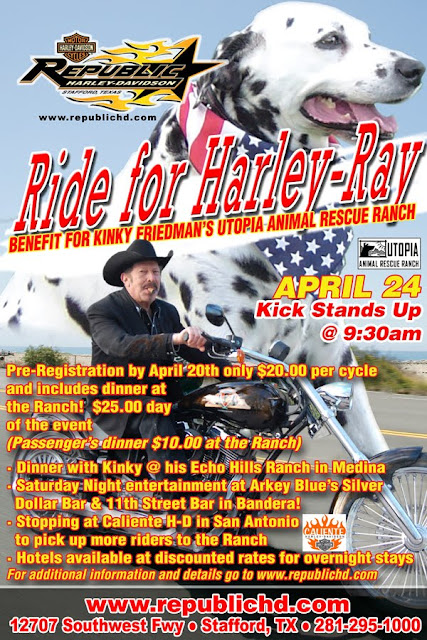 In addition, Republic Harley-Davidson has donated a Thunder MountainCustom motorcycle  customized as The Kinky Friedman Cigar Cycle!  The beautiful custom painted cycle proudly displays Kinky’s cigar logo, website, and our logo as well.  The cycle is going to be displayed at Republic, Caliente in San Antonio, at the Silver Dollar Bar, and multiples of other events and fundraisers throughout the year.  A special event will be held on a Saturday in October at Republic where the cycle will be raffled to the winning ticket holder.  Of course, the perfect ending is having Kinky be the one to draw the winning ticket at Republic!
Craig said that this ride is a very special part of his life as it is dedicated to his beloved best friend, Harley-Ray.
Our rescue ranch is so lucky to have met up with these nice people and we are really looking forward to the upcoming events. We love Craig and all of the people at Republic Harley-Davidson in Stafford, Texas! They're using their Hogs to help our dogs and we love it! Thank you so much!

I'm going into Outer Space with Tone for Happy Hour. Good luck, Ellen! We've got our fingers crossed for Sandy!