Today has been really great even though I had a wacky weekend filled with one surprise after another. For some reason we had visitors all day long on Sunday even though that is our day off and I was exhausted by the end of the day so I went to bed early last night.

This afternoon after lunch Tone and I took off for Copies Plus in Kerrville so I could pay Trisha for her  beautiful work on the cover of my book and to pick up the red sock. When we arrived at Copies Plus I was pleasantly surprised when Trisha gave me a print out of the book cover and a folded sheet of the cover so I could see how it would actually wrap around on the book. I loved how she had designed the spine, and her added tweaks—made my book cover really pop! Thank you, Trisha—You Rock!

After we left Copies Plus we decided to go to Wolfmueller's Books so I could show the finished cover to Sandy and Jon because I was so proud of it. Unfortunately, Sandy wasn't there but Jon was so we visited with him. When I showed the book cover to Jon he told me that he liked it and thought it looked really good. Then he says, "Are you going to blog about it tonight because you haven't written a blog since Saturday night..." I started laughing.

"Yes, Jon.  I only missed last night because we had a wacky weekend..." Then Sandy called him on the phone and needed for him to look up some information so we left and came back to the rescue ranch.

Early this evening Ellen Jackson, our friend and great dog-walking volunteer, came out to pick up Sandy, our big, shy but sweet dog, to see if he wanted to go home with her and become a Jackson and live with her and her cats.

Sandy was happy to see Ellen, but things went a little south when Tony lifted him up and put him into the back seat of her car because Sandy immediately pooped a little on the sheet covered back seat. We all laughed about it as Sandy was removed from the car so Ellen could replace the soiled sheet with a new one. "I think I will take Sandy for a little walk before we try loading him up again," Ellen joked. Then she and Sandy took off on their walk. Ten minutes later T. reloaded Sandy into the back seat and they took off into the sunset. We all have our fingers crossed that Sandy will work out and be okay with her cats. Here is a picture of Tony, Ellen and Sandy. 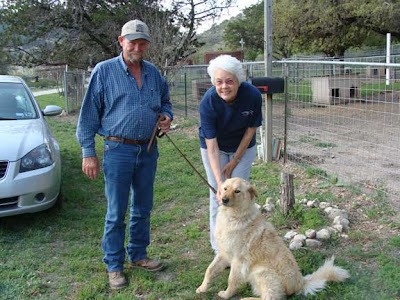 After Sandy and Ellen left I went over to the Lodge to visit with Kinky. "Sandy has left the building, Kinky!"

"That is great news!" Kinky said with enthusiasm. "I hope it works out for Sandy. He's a good dog. Did you remember to thank Ellen for me and tell her what I said about her being a saint for giving Sandy a chance?"

"Yes, I did, but sheet happens..." After I told Kink about Sandy's car accident he laughed.

When I came home Tony had some great news. "Ellen just called. She said that everything is working out so far with Sandy. She told me that Sandy was scared of the cats when he met them and he hid behind her legs. Isn't that great news, Nance?"

Y'all have a great evening!"
Posted by cousin nancy at 9:08 PM

Always happy to see another adoption, looks like a yellow lab to me, always an even tempered dog. Nancy, Tony, Kinky and all the volunteers keep up the good work! Hope to see all of you this summer.

Good morning, Roger! I have been so busy here and I will call you soon to update you about Mr. Rogers and Miss Dee.