Thank You, Willie and Republic Harley-Davidson!

Today has been a great day! This morning I got up really early because I had much to do. After feeding the dogs and Lucky, I walked six miles with Leslie and by eight o'clock Tone and I had eaten breakfast and the kitchen was cleaned up. Then I spent an hour catching up with ranch business, then I checked PayPal to see how many books I had sold. When I pulled up my account I about fell out of my chair when I saw all of the orders that had come in for my book since yesterday. I was so excited about the orders I went over to the Lodge to tell Kinky while T. did his outside chores.

"Are they selling like hot cakes, Nance?" Kinky asked. When I told him how many new book orders I had he nearly choked on his coffee. He told me that he was thrilled for me and he could not believe how fast they were selling. Then Kinky invited me to go with him to Austin on Friday because he was doing a lecture at the University of Texas and he wanted me to talk to them about our rescue ranch and sell my new book. I thanked him for the invite and told him that I would think about it and get back to him, because Austin traffic scares me.

While we were visiting Kinky in the kitchen Kinky told me that Willie Nelson had signed the "Kinky Friedman Custon Harley-Davidson" the night before in Austin, that Republic Harley-Davidson in Stafford, Texas is going to raffle off in October with all of the proceeds going to our rescue ranch! "Nance, the bike looks really beautiful. Please tell everyone on your blog about it so they can buy a $25.00 raffle ticket and have a chance to win." 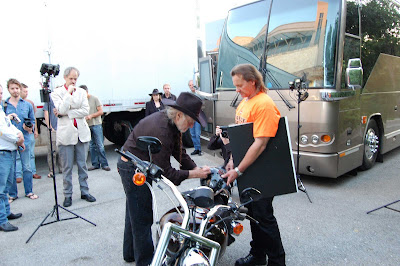 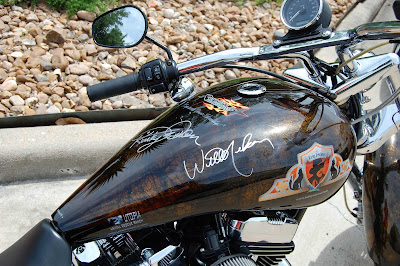 When I returned to the rescue ranch I spent over an hour fulfilling my book orders and when Tony walked inside the trailer and saw the big box full of books ready to be mailed out his jaw dropped to the floor. "Tony, we have to mail all of these out today. Can you believe it!" Tony smiled.

After lunch we dropped Annie Oakley off at Hoegemeyers to get her shots, mailed out my books and then we went to Wolfmueller's Books and Kinky was there and he was hilarious. After Sandy, Jon and I discussed them buying my books Kinky jokingly said, "Nance, now let me negotiate the book deal for you..."

I looked over at Sandy and she shot me a wink and said loud enough for Kink to hear, "Let's discuss it after Kinky leaves." We all started laughing and when Kinky left the building Sandy and I cut a quick deal and then I signed my books that they had just purchased from me. Then we left Wolfmueller's Books, picked up Annie and came home.

Around five o'clock I went outside to the barn and grabbed a giant box of Milk Bone dog treats and then I gave two to three treats to each dog while I visited with them. I really enjoyed it, but not as much as our dogs did.

I'm going to forward todays blog to all my animal friends so they will know about Nancys new book. I'm so happy about the book selling so well!