A Big Backpack Should Have Been A Fanny Pack!

Today has been really fun even though I overslept this morning and didn't wake up until eight-thirty (which would have been seven-thirty if we hadn't had the stupid time change). This morning while I was walking six miles with Leslie Sansone, Lisa, Matt and Meghann were outside helping Ben and Tony dip our dogs for fleas and ticks.

After walking I cleaned up and dressed in my Easter Egg outfit: pink overalls with an off-white turtleneck and my pretty pink Crocs and then I went outside to lend a hand. When I arrived at the barn everything looked under control and organized and running like clockwork.

Tony and Ben were the official self appointed "Dog Dippers" and Team L&M were fetching and returning the dogs to their pens. After saying hello to everyone I grabbed a leash and took off to Blackie's and Alfie's pen so they could be dipped. An hour later all of our dogs had been dipped, but Tony's and Ben's backs were hurting after lifting all of our dogs into and out of the trough.

Then I had a really fun visit with everyone. We teased Lisa about being covered in mud and Matt for accidentally letting Randy Travis escape from his pen. Then Lisa told Ben about loving his chocolate and she asked him when he was going to bring some more out. "I'll bring some the next time that I come out, but you can now buy it at the H.E.B in Kerrville." I was shocked when Ben said that.

"Miles of Chocolate is now in Kerrville!" I said. "That is fantastic news, Ben! Where is it in the store?"

"You can get it at their Deli section."

"I'm going straight to H.E.B. to buy some after we leave here," Lisa said. Fifteen minutes later Team L&M said goodbye to Team BNT and they took off for the H.E.B. in Kerrville. Then we talked about them needing to get cleaned up and what I was cooking for lunch.

While Tone was taking a shower I put the H.E.B. fully cooked meatballs into the oven to warm and then I filled a pan with water and put in the spaghetti to cook. Then I discovered that I was out of Ragu so I threw out the uncooked spaghetti and went to Plan B.—beans and cornbread with meatballs.

After lunch June, Ellen, Eileen and Ellen's visiting friends Kent and Joan from Columbus, Mississippi came out to walk our dogs so we went outside to greet them and to thank them for coming out. I ended up going for a dog walk with them and I had as much fun as our dogs did.

June, Eileen and Ellen had me laughing from the git-go because they are so funny and I was fascinated listening to Kent and Joan telling me about how they had met. "Joan is from South Africa. We met in the Red Sea. She and I were both working in Saudi Arabia and we loved scuba diving... " Kent said. Then I took off and joined June and Joan to visit with them.

Joan told me about what it is like to be a woman living in Saudi Arabia and how the women are treated and I could not believe it, but I did. "It makes me glad to be living in the U.S.A.," June said. After all of the dogs were returned to their pens we had a fun visit by the barn.

"I just found out that you can buy Ben's chocolate at the H.E.B in Kerrville! Ben just told me earlier this morning." June, Eileen and Ellen were delighted with my news and then we told Joan and Kent about Miles of Chocolate being voted Austin's Favorite Chocolate for the past three years. Then the subject changed to arrowheads.

"There are arrowheads laying around everywhere out here—thanks to Ben." I said as Ben and Tony laughed. "Several years ago Ben played a joke on Tone. Ben got ahold of a lot of fake arrowheads and he scattered them all over the ranch for Tony to find..."

"I drove all around the ranch and just flung them out the window," Ben said as we all laughed. Then I asked Joan about the snakes and the spiders in South Africa because of my spider bite.

Joan told us about two deadly snakes in South Africa where her family still lives and then she said the funniest thing. "South Africa is beautiful and the Texas Hill Country reminds me of it. People in South Africa can rent caves with nearby water to get back to nature and relax. One time I rented a cave and one day I decided to go backpacking naked into the forest and..." Her words pricked my ears so I interrupted her.

"You went backpacking—naked?" Everyone started laughing. Joan blushed and nodded her head yes.

"Yes, Nancy," Joan said, "but I had a big backpack, but I am embarrassed to say that my butt got awfully sunburned..." Everyone was laughing and making wisecracks. "It was very secluded and no people were there." Then the subject changed but I couldn't quit thinking about going backpacking—naked because I can't even go barefoot inside the trailer or anywhere else.

Then Ellen and Eileen told us a hilarious story about when they were kids growing up in Mississippi and unknowingly being a cover for an old man who was making moonshine when he took them horseback riding into the woods. "He would always tell us to stop about halfway into our ride and tell us to ride on and he would meet up with us on the trail," Eileen said. "We'd go on and then thirty minutes later he would appear out of nowhere and finish the ride with us."

"We never knew," Ellen laughingly said. "We didn't find out until years later that he was making moonshine."

"Y'all should call yourselves "The Moonshine Girls," I said. We visited for about twenty more minutes and then they had to leave. After they left I returned to the trailer and checked my e-mail and I am thrilled that I did.

Trisha at Copies Plus had sent me a proof of her conversion of the  cover that I had designed for the book and it looked fantastic! And the tweaks that she suggested were perfect. She is so talented. Thank you, Trisha! I love it! Here is a picture of Kent, Eileen and Ellen with Princess and Marlin. 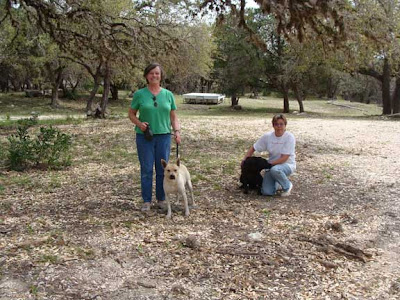 P.S. This evening Ben told me about a metal sculpture that he has started working on and he needs used saw blades. If any of y'all have any old round saw blades and you want to help Ben, please send them to me at the rescue ranch.

Y'all have a great evening!
Posted by cousin nancy at 8:36 PM

Nancy, I'm so looking forward to seeing this book come together in it's final state!! See y'all soon!