Saturday was so much fun even though the Ride For Harley-Ray had to be canceled due to the weather! Instead of walking with Leslie in the morning, Hazel and I cleaned the trailer because Leisa Lea and Rick Richenbach, our good friends from Port Aransas were coming up to see us and spend the night.

After Hazel went back into the closet I mopped the trailer floors and then I went outside and saw Ellen Jackson and Eileen Gotke our friends and great dog-walking volunteers nearby. I hollered at them and invited them to come up to the trailer before they started walking our dogs. A couple of minutes later they were inside the trailer and we were all laughing!

"Nancy, I have a special gift for you that I bought in Fredericksburg," Eileen said as she pulled a pink felt cowboy hat trimmed in pink feathers with expensive rhinestones. As she fiddled around with something inside the hat Eileen said, "When I saw it I thought of you and I just had to buy it!" Then the rhinestones on the top part of the hat started flashing with bright lights that changed colors. The three of us started laughing immediately. "I thought you could wear this thing when you are playing the drums with your pink drumsticks."

I ran out of the room into my office and then quickly returned with my pink, feathered sticks with glitter and my lavender colored drum pad that has a pink bow glued to the top of it. "I love the hat!" I said. "The hat matches my drumsticks perfectly!" Here is a picture of Eileen holding my pink hat and that is Ellen's arm on the right and the reason that the picture is a little bit blurry is because I was shaking with laughter when I shot Eileen in the big room. 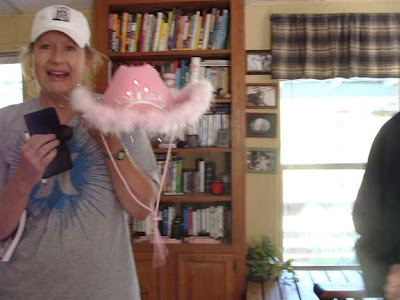 Then Ellen or Eileen suggested that I replace one of Tony's cowboy hats on the wall with it, as a joke so I did. And guess what? I love seeing it next to my Roy Rogers' wall and I plan to hang it there permanently. Here is a picture of my new, beautiful, flashing-light cowgirl hat hanging on the wall right next to Roy. 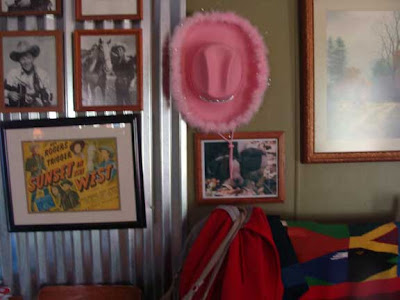 After we finally quit laughing about my new pink, flashing cowboy hat, Ellen gave me the greatest update on Sandy, who she adopted from us a few weeks ago. She renamed Sandy—Jermaine Jackson and I like that. Ellen told us that Jermaine is now a very happy dog and he has adjusted to the city life really well! Her news and Eileen's pink hat made my day and I told them so. Then we talked some business. They bought several copies of my new book and I signed them for them and then I invited them to go into Outer Space with me for a visit.
After we sat down our hen party started and it was non-stop laughter. Eileen and Ellen are very funny people and they have great senses of humor and they had me laughing so hard my back began to ache a little. Somewhere during our fun conversation, I guess when I started talking about our uncreative, part-time poltergist that visits us inside the trailer we started trading funny stories about funny funerals and ghosts, etc.
To protect the innocent and the guilty I am not going to say who said this in our conversation. "One time I was at a funeral and the biggest three tier flower arrangement had this little old-timey plastic telephone that looked like a kid's toy on it. It looked like one of those rotary dial up phones that we used to use. Anyway, the little phone was attached to the tier and the handset that you held and talked and listened to was off of the hook and attached next to a big glittery sign, in big letters that read: Jesus is calling you."  And we broke out laughing!
And then I fell apart when one of them told me about a family member who had died and she had wanted to be buried next to her grandmother in a nearby town instead of next to her mother where she was supposed to be buried.
"Bless her heart, we cremated her and the funeral home director asked me and my sister if we wanted to split up her ashes. We didn't know that you could do that or if it was even legal. We decided to split up her ashes and we both got a box with her in it."
"Did you tell them that you wanted the top part?" I joked. We laughed and then she continued with her hilarious story.
"We wanted to grant her her last wishes, so my sister and husband and I had a really big, but not tall, long tombstone made with her name and Grandma Mammy's name on it and it was really heavy. So early one morning after my husband had carefully loaded it into the back of our pickup so my sister and I could easily drag it out of the back of the truck, she and I took off for the little nearby town where Mammy was planted. Right after dawn we arrived at the cemetery and we found her grave and then we backed up beside Grandma Mammy's grave. Fortunately no living soul, but us were in the small town cemetery so my sister and I dragged the grave marker out of the pickup and we placed the heavy thing right next to Mammy's grave and then we quickly drove away real fast! And no one has ever found out!"
We were laughing so hard after hearing her story we had tears falling from our eyes. The other one then said, "One time I was at a funeral being held in a cemetery and right next to the grave site there was this big, tall, round heavy grave marker that looked just like a giant firecracker and guess what the words on it said?" There was a long pause. "Pop!" She said. I laughed so hard I accidentally farted, but fortunately it wasn't real loud and they were laughing with me, so I don't think they even heard it. After a few more tales that I cannot repeat they took off to go walk our dogs. Thank you, Eileen and Ellen!
When I came inside the trailer Carlton was flashing to let me know that Kinky had called. After I returned his phone call I went over to the Lodge for a fun, but short visit. When I told him some of Ellen's and Eileen's hilarious stories and about me accidentally passing gas he cracked up with laughter.
Right after lunch, at one o'clock Rick and Leisa arrived! To Be Continued... (Sorry, Mari.)
Y'all have a great evening!
Posted by cousin nancy at 9:12 PM

your new hat will make a great night light.