Thursday night at nine o'clock after Tony promised to wake me up at five in the morning, I went to bed, but I didn't sleep well because I tossed and turned all night because I was so stressed out about going to Austin Friday morning.

Tone kept his promise to me and woke me up at five o'clock. When I came into the kitchen to feed the dogs and cat, T. handed me a cup of fresh coffee that he had made and said, "I've already fed everybody."

After thanking him for waking me up early and fixin' the coffee and for feeding the dogs I went and took a shower. When I started to dress in the clothes that I had chosen to wear for my trip up to Austin I hesitated, because I really didn't want to go to Austin because of the terrifying traffic or be gone for over twelve hours away from Tony and the rescue ranch.

When I told T. that I had decided to cancel my trip he told me that he understood, but I could tell that he was a little disappointed, because Kinky had told us that it was a great opportunity for me to sell a lot of  books.

At six-thirty, after having drank two cups of strong coffee I felt exhausted yet relieved about not going to Austin, so I picked up the phone and punched in Kinky's number because he had requested a six-thirty wake-up call. After two unsuccessful attempts to wake Kink, Tony and I jumped into Buttermilk and went over to the Lodge in the dark.

When we arrived all of the lights were out inside the Lodge, but Ben's truck was parked in the parking lot. "Ben's here!" I said as if T. hadn't already noticed his pickup. When we walked inside the dark kitchen I half-hollered, "Kinky! Kinky you need to wake up!" There was silence and Brownie and Chumley didn't come running into the kitchen to greet us. "Kinky!" Tony hollered in his soft voice.

Thirty seconds later Kinky walked into the kitchen half asleep and flipped on the light. "Thank y'all for waking me up," Kinky said as he starting making some coffee.

"Kink, I'm not going to Austin." Kinky plugged in his perculator and then he turned around and looked at me and smiled.

"You're not?" He asked. "That's fine. It is no big deal, Nance. I can sell your books for you..." We visited with Kinky for about five minutes then Buttermilk took us home.

After breakfast Tony went to the Old Timer and I walked six miles with Leslie even though I really didn't want to because I was so tired. Then I called Ronnie to tell him about not coming to Austin as planned. Ronnie laughed when he heard my news and said, "I knew that you would back out," he teased, "you're a No-Show-Nance!" We laughed about it and then we visited for a few more minutes.

A little while later when Tony and Ben were outside doing the morning chores I went outside and push mowed our front yard. Then I jumped on the riding lawn mower and drove down to the front gate and mowed the grass out front of our rescue ranch while Jim, our great dog-walking volunteer walked our dogs.

After lunch while Tony and Ben mowed and weed-eated I went outside to help them.  I push mowed and used the weed eater until three o'clock because it was hot outside and the ranch looked great.

I guess I did all of that yard work because I felt guilty for not going to Austin. Last night I went to bed really early because I was so tired and that is why I did not post a blog.

This morning after walking eight miles Kinky called to tell me that he was on his way back to the ranch and that he had sold a ton of my books for me! I was thrilled!

After lunch with Ben and Tony, Ben took my pink, feathered light-flashing-hat off of the wall in the big room and put it on to make us laugh. While we were laughing T. grabbed my camera and shot Ben twice. 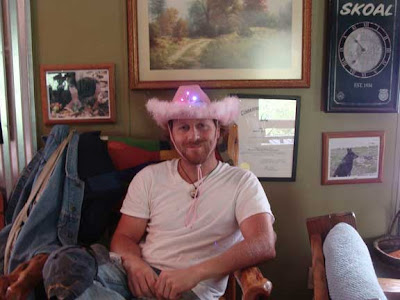 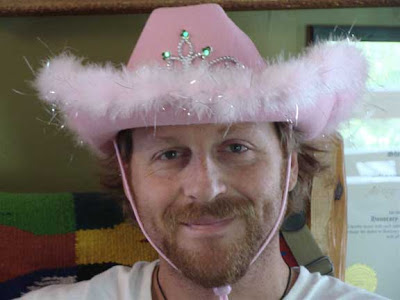 Then Kinky called to tell us that he was back at the ranch and he invited us to come over. "Nance," Ben said, "wear the pink hat." Ben then took it off and I put it on and then Kermit took us over to the Lodge. We laughed all of the way over there.

When we arrived Ben went to check on his dogs, Penny and Valerie aka "The girls from Austin" as Tony and I went into the Lodge. Kinky was busy doing some paperwork when we entered his office. He talked to us for a good three minutes before he ever turned around. When he finally got up from his desk and turned around he burst out laughing when he saw me wearing my pink cowgirl hat, that Eileen Gotke had given to me a week ago Saturday, with its bright lights flashing different colors. When Kinky finally quit laughing at me and the hat Will and Ben walked inside the Lodge and I got the same reaction from Will that I had gotten from Kinky.

Then Tony challenged Will to a game of pool which was not smart because T. was the reigning Pool Champion of Echo Hill. Will beat the Medina Bulldog twice, so Tony, Ben and I returned to the rescue ranch. After I hung my pink hat back up on the wall in the big room we went into Outer Space and had a fun visit and somewhere in our conversation Ben suggested that I wear the pink hat with my pink overalls and pink boots.

Y'all have a great evening!
Posted by cousin nancy at 8:40 PM