The War Of The Weeds Or I Knead A Little Help From My Friends!

Yesterday morning after walking six miles with Leslie Sansone, Ben and Tony came inside the trailer after doing their chores outside to discuss what I was going to fix them for lunch. "I've got a jar of Ragu and was thinking of fixing some spaghetti, but with shrimp instead of meatballs," I said. "How does that sound?"

Even though the guys didn't jump up and down with joy in the big room, like I had hoped they would, they told me that my spaghetti would be fine. Before going back outside to mow and edge we decided to eat lunch at noon. Then I showed off to Ben my new William and Sonoma marble rolling pin, pastry scrapper and the marble, made in Spain, pastry board that Karen and 'Erb had sent to me. Ben was real impressed, so I asked him if he would help me make flour tortillas after lunch and he told me that he would and then they went outside to battle the war of the weeds.

After I had returned several phone calls, I changed clothes and I put on my denim work overalls and then went outside to help Ben and Tone mow and weed-eat before the future forecasted rain came. I am proud to say that I push-mowed our backyard, the front yard, the side yard by Tony's garden and the front yard of my writing cabin all by myself! When it was time for us to go inside for lunch Tony and Ben told me that they were really impressed with my hard work. Of course, I know they were just glad that they didn't have to do it.

After I put the spaghetti into the water to boil on the stovetop I had a big surprise. "Ben! I don't have any Ragu! I thought I had some. I need your help. What can we do?" Tony and Ben started laughing.

"Nance, you are always out of Ragu," Ben teased. Then we went over to "my wall pantry" and Ben removed a large can of tomatoes and a can of tomato sauce. "I'll fix lunch." I was thrilled, but not as much as Tony was. Twenty minutes later the three of us were eating Ben's delicious meal. Thank you, Ben!

At one point while Ben was kneading the dough on the 'Made in Spain' pastry board he got to laughing and started teasing me about the way I pronouce tortilla. "Y'all, want a torrrrr—tilla?" Ben said mocking my drawl, while wearing a big smile on his face. He and T. started laughing. "It's a Fort Worth 'thang' and everyone up there in North Texas talks like that. I can just see you calling Cindy and Ronnie and asking them how they pronounce tortilla and they will pronounce it just like you do! Torrrr—tilla." We got to laughing so hard we accidentally let the covered eight balls of dough rest an extra minute. Then the three of us became a torrrr—tilla factory assembly line.

Ben was the roller and on a roll. I was the cooker that cooked, and T. was the official timekeeper. While Ben dusted and rolled out the balls into seven to eight inch circles, I cooked them thirty seconds on each side in a hot skillet while Tony told me when to flip them and they were absolutely delicious! Here is a picture that I took of the torrrr—tillas! Thank you Karen and 'Erb! Your Care's Care Package did the trick and as soon as I have a little extra time I am going to make some and overnight them to y'all! 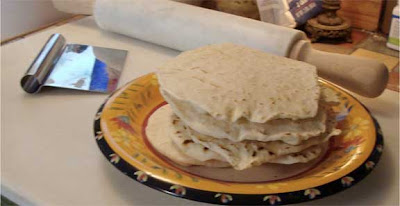 After I cleaned up the kitchen in the torrrr—tilla factory I went outside and push-mowed and weed-eated until five o'clock with Ben and Tone. And that is why I didn't post a blog last night because I was exhausted and I went to bed before eight-thirty. And I am glad that I did.

This morning I woke up at five o'clock while T. slept like a log. After I had fed our fur buddies it started thundering and lightning up a storm. And I mean a big storm with pea-sized hail. Fortunately, it only hailed for about three minutes then the electricity started going off and on while I was trying to unplug everything from the wall sockets. Thank goodness I had a flashlight!

By seven-thirty it had quit storming and Tony and I were sitting in Outer Space drinking coffee even though we were under a tornado warning that Lisa had alerted us to. Thank you, Lisa!

When Ben arrived Tony and I were already outside feeding the dogs and cleaning their pens. "Morning, Ben!" I half-hollered from Hank's and Nellybelle's pen. "We're under a tornado warning!" Ben started laughing!

"A torrrr—nado alert," Ben teased. "I'm starting to figure this out. Anything that starts with tor is pronounced torrrr—nado!  I'm so torrrr—up."

This afternoon Buttermilk took us over to the Lodge to deliver an urgent message to Marcie from Kinky for her to call him as soon as possible. He is on the road for a few more days and needed for Marce to call him. After asking Marcie to call Kink we went to Kerrville to get some supplies at H.E.B. where we ran into our super volunteer and good friend, Ellen Jackson, by the toilet paper section! Scott Extra Soft tissue to be exact.

After howdies and hugs Ellen asked us how Rita Coolidge was doing. "Ellen, she's fine, but she really misses her sister, Emmylou Harris. She is so lonesome." Then the three of us made a secret plan about getting Rita adopted, but to protect the innocent and us, I can't reveal it at this time, but please keep your fingers crossed for little Rita. 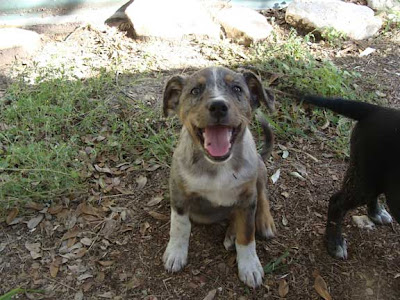 Y'all have a great evening!
Posted by cousin nancy at 8:36 PM