Today has been a total  blast since Mercury is finally out of retrograde! Late this morning after walking only four miles I went over to the Lodge to visit with Kinky and Marcie and I brought two homemade veggie burgers that I had made for them.

While Kinky talked on his phone in his office Marcie and I caught up with each other's news in the kitchen. Then Frank and Jerome joined us and that ended our fun hen party even though we enjoyed their company.

When Kinky was done talking on the phone we all went outside to the Friedman Family Bone Orchard, then after about ten minutes Kinky abuptly went inside. A few minutes later he came back outside with the veggie burgers that I had made for them.

As everyone gobbled them up and gave me compliments in between bites, I told them about my recent flour tortilla disaster. "Y'all, should have seen them. Some of them looked like thick pancakes while others were so small you couldn't even wrap one around your little finger..." Then I bragged about our good friends, 'Erb and Karen Cares sending me a marble rolling pin and a pastry scrapper to help me make better tortillas. "The marble pastry board should be arriving today and I can't wait. I can't believe it, y'all! They are from Williams & Sonoma, the Cadillac of kitchenware and they were handmade in Spain!" Everyone thought it was very cool.

This afternoon the dogs outside started barking so Tone went outside to check on them. When he returned to the trailer he was carrying a large box and wearing a smile on his face, "UPS was just here. Here's your marble pastry board. It's really heavy." While Tony cut open the box I punched in Kink's phone number and invited him and Marcie to come over to see my Cares' care package.

A few minutes later when they arrived Kinky surprised me. "Nance, we brought some chicken with us and we want to have a picnic with Toto and your old timers. Is that okay?" After our dogs had enjoyed their yummy picnic with Marcie and Kinky we went inside the trailer so I could show off my new kitchen products from Spain.

While admiring my Cares' Package Kinky picked up the marble rolling pin from Spain and said, "You had better look out, Tone, because if you make Nancy mad, this could be considered a lethal weapon in a court of law and the jury would be hard-pressed to find her guilty." Here is a picture of the marble board and the rolling pin. I'm sorry, but I forgot to include the pastry scrapper. 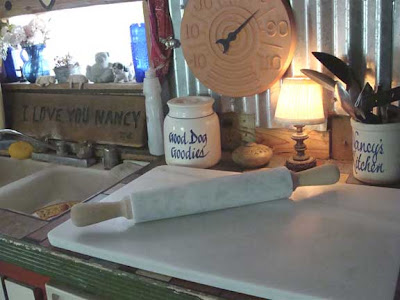 This afternoon Lisa, one of our great volunteers called! She had some time off and she wanted to know if she could come out to visit with us. "I have missed you guys so much..." But not as much as we have missed her and Matt.

Forty five minutes later after multiple hugs outside by my writing cabin the three of us went into Outer Space and we had a blast to say the least! It was non-stop talking and laughing as we caught up with each others' news.

Before Lisa left the rescue ranch she promised us to bring Matt with her the next time that she comes out and we are so looking forward to it because we have missed that Dynamic Duo so much.

Tonight I want to do two shout-outs to some really great people, so here goes: Thank you, Karen & 'Erb! I love y'all! And to Mark in Mississippi—you Rock and we cannot wait to meet you!

Y'all have a great evening!
Posted by cousin nancy at 9:00 PM

Like I said, when you're done with the marble slab, don't throw it away. I might need it for my mausoleum!

Good morning, Karen and 'Erb! I love my rolling pin, scrapper and mausoleum slab starter-kit board! Thank y'all so much!

Ben will be here for the next two days and I am going to ask him to help me make the flour tortillas if he has the time. Wish me luck!