Yesterday morning my nephew Tom, Cindy's son, called me. "Nancy, Nicki and I are at the Kerrville Folk Festival with her parents Nancy and David and Nicki's sister Rachel and several friends. Anyway, we wanted to know if it would be okay for all of us to come out tomorrow. I know that we are a big gang..."

"Tom, that would be fine, but I didn't know that you were in a gang. Do Cindy and Ray know that you are a gangster?" I teased. Before hanging up he told me that they would come out after one o'clock.

In between returning phone calls, answering e-mails, and doing paperwork I cleaned up the inside of the trailer. At seven o'clock last night I called it quits and watched a couple of reruns of Everybody Loves Raymond on the television.

This morning I got up early. I fed the dogs and Lucky and walked six miles before T. returned from The Old Timer. After he ate and I drank breakfast I went outside to help him with his chores. "I'll clean the pens while you feed, Tone." Then he grabbed the feed buckets and I grabbed the poop bucket and the pooper-scooper and we went to work.

After I cleaned all of the pens I came inside and cleaned the trailer some more. I cleaned the windows, mopped the floors, etc.  and then I jumped into the bathtub and cleaned myself and then made lunch. We had cornbread and beans.

Right after I had cleaned up the kitchen our neighbor, artist and friend Steve Peach showed up with a couple of his artists friends Kelli & Danny Garrett that were visiting him. They wanted a tour of the rescue ranch so I happily volunteered to give them a tour.

During the tour even though I talked way too much I found out that Danny Garrett was one of the famous Austin poster Artists during the Armadillo World Headquarter days and he was writing a book about it for the TCU Press up in Fort Worth!

As we walked around the rescue ranch we discovered that we had several friends in common. They knew Henry Gonzales and the late Danny Young who passed away last year. When the tour was over our conversation wasn't so we went into the Space Ship and then into Outer Space. They thought the Space Ship was cool and they loved being in Outer Space.

Before they left to go eat lunch Danny and Steve purchased my new book and then I asked Danny if he had a business card so I could check out his artwork. Kelli took off for the truck and returned with three cards that looked like mini dollar bills and the artwork on them was fantastic! When I looked at the back side of the card included in the artwork were these words: "IT's ODD WE TRUST" and it made me laugh out loud. Click here to visit Danny Garrett. He really rocks!

Right after they left our friends Jacky & Brian Kanof arrived, so we went into Outer Space with them and had a really fun visit with them. Brian updated us on Zelda and Bogie, the cats that he adopted from us and then we talked about photography, writing and the Kerrville Folk Festival. Then Jacky showed me the beautiful diamond wedding ring that Brian had made for her and then Brian showed me his matching band without a diamond. Then they asked to buy two copies of my book and for me to sign for them. Jacky laughed out loud when she read what I had written in her book: "Jacky, Can I have your wedding ring?"

Just as they were fixin' to leave Tom and his gang arrived! After introductions Brian and Jacky said goodbye to all of us and then they took off for the folk festival. I invited everyone to go into Outer Space and we had a blast! Nicki's mom, Nancy Lemon had us laughing from the git-go and her husband David, a closet comedian, kept making hilarious wisecracks that only I could hear that caused me to look like an idiot, because no one understood why I kept bursting out loud with laughter.

During our fun visit with "Tom's Gang" Nancy told us about her latest addiction—Miles of Chocolate! "I bought one of their giant bricks and I ate the whole thing!" Tom & Nicki's friends didn't know about the chocolate, so I came inside and pulled a package out of the freezer and then went outside with it. Tony cut it up in slices and then served it to everyone. To say the least, they loved it and were now also addicted to it so they all had seconds with only one piece left so T. offered it to Nancy and she shared it with Nicki. Then we started talking about pigs—Beckham to be exact, because Nicki & Tom's friends knew about them rescuing him and bringing him to us. Then we went inside the trailer because it was getting hot outside.

After giving everyone a tour of the trailer I told everyone about my drum lesson and they asked to see my pad, sticks and digital drum pad. Everyone laughed when they saw my sticks and lavender colored drum pad and then they all took turns banging on the digital drum pad. One of their friends put on my new pink feathered, flashing lights cowboy hat and he started cutting up on the drums and here is a picture of him as we all watched and laughed. 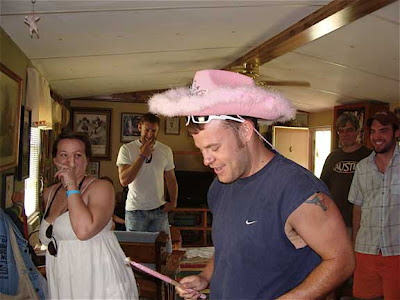 He played the drums the best. After Tom tried out the drums he sat down at the table and took off his cap and I teased him about his hair being messed up, so I shot him! (Sorry, Cindy and Ray.) 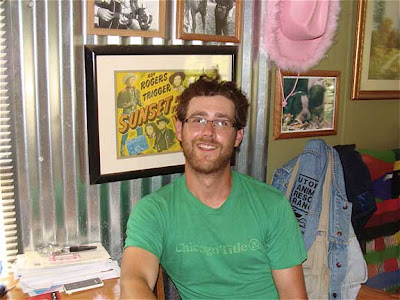 After I put the drums away Nancy told me that they needed to leave and I didn't want them to because I was having so much fun, so I invited them to take a tour of the Space Ship. Everyone loved it and thought it was cool. Then Nancy said they really needed to leave, so I asked her if all of us could go over to the Lodge so I could take a picture of her with the Buddha dog that she had given to Kinky two years ago.

When we arrived at the Lodge we went to the Friedman Family Bone Orchard and everyone admired it and thought it was so beautiful and they could not believe all of the Hummingbirds that were hanging out at Kinky's feeders. While Nicki busily snapped her camera at Kinky's Hummingbird Herd I shot Nancy. 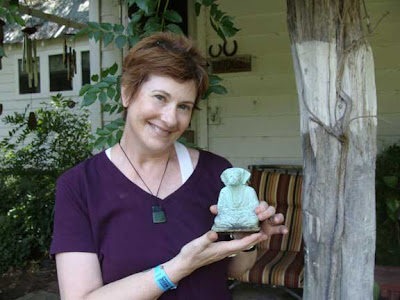 When Nancy announced for the third time that they really needed to leave I gave up trying to keep "Tom's Gang" from going, so we returned to the rescue ranch and fondly bid them farewell.

Tonight's shout out is to Nancy & David Lemon and Tom & Nicki's Gang. Thank y'all so much for coming out to see us and for not packin'! We love y'all and please come back soon! Y'all rock!

Y'all have a great evening!
Posted by cousin nancy at 8:46 PM