This morning I got up really early, did all my chores and then I walked six miles before Tony returned home from the Old Timer in Medina. After he ate breakfast tacos and I drank my delicious, healthy smoothie he went back into his office to do a little farming while I cleaned up the kitchen.

While he was busy plowing and planting pretend plants I went online. After I checked and answered my e-mail I went to Bluefoot Publishing to check for any new information posted. When I was on the home page  I noticed a new topic had been added to the top of the page, so I clicked on the button that read: "Best" and I literally fell out of my kitchen chair when I saw Tony's name and then my name listed on the Best page with several other authors names.

When I got up off of the floor I clicked on Tony's name and up came his story, "Runts Rule!" Then Tone walked into the big room to see what had made the loud noise. "It was me," I said. "I accidentally fell out of my chair when I read that your short story and mine is going to be published!"

"Your story!" I said with excitement.

"What are you talking about, Nance?" Then I made my confession.

"Last week after I had submitted a story to John at Bluefoot Publishing, I did something behind your back. I sent John an e-mail with the story you wrote several years ago—"Runts Rule!" I told John that I was secretly sending him your story because I loved it. I told him that you had forgotten about it and if they thought it was good enough to be included in their book that you would be thrilled. But in case they didn't want to use it, your feelings wouldn't get hurt because you wouldn't know anything about it. I am sorry that I did it without telling you. I just didn't want you to be disappointed. Tony, they liked your story and they have put it on their Best page! Come look! You're a writer, too!"

I got out of my chair so T. could sit down to see what I was talking about. Tony clicked on the Best page and then he saw his name and the title of his story. "Click on it and read your story, Tone! It is great!" I said.

After Tony read what he had wrote years ago he said, "Thank you, Nance. I can't believe this! And yes, I had completely forgotten about writing it. I'm going to get on Facebook and tell all of my friends that my story is going to be published!" Then he left the kitchen and went down the hall to his office.

Fifteen minutes later T. came into the kitchen wearing a big smile on his face. "Nance, you're not going to believe this! All of these people are posting congrats on my Facebook page telling me that they loved reading my story and congratulating me for getting published! Did you really like my story?"

"Yes, Tone. I love your story and that is why I saved it on my computer for all of these years. It's really good. Congratulations, T. now you know how exciting it is to get published..." Then things went south.

While Tony was outside doing his chores I started a load of laundry in Queen Bee. Then I went into the bathroom to grab a few towels that needed to be washed and when I looked out the window I about fainted at what I saw! I saw the tail of a rattlesnake about a foot long and about five inches round stuck in the chicken wire about five feet from the trailer. I could not see the rest of the snake because it was hidden under some brush inside Tony's garden.

I quickly ran into the kitchen grabbed my camera, inserted the newly charged battery and ran back into the bathroom so I could take a picture of it, but it was gone! "OMG!" I said as goosebumps went up and down my spine. Then I ran out of the trailer, jumped into Buttermilk and took off to find Tony at the other end of the rescue ranch feeding Mr. Rogers and Miss Dee.

When I put Buttermilk into park and turned her off, I pulled the door latch but the door didn't open so I had to do The Procedure for the very first time in panic mode! I quickly turned the ignition switch on so I could roll down the electric window, then I had to take off my seat belt so I could turn around in the front seat so I could stick my arm outside the window so I could open the door, then I had to turn around in the front seat and turn off Buttermilk before I jumped out of the antique 1998 Ford Explorer!

Tony had watched The Procedure event and he was laughing his head off so to speak when I escaped unharmed. When I quickly told him about the snake he quit laughing. We said goodbye to the dogs from Kansas, jumped into Kermit and headed for the trailer while making a plan. "Nance, get all of the dogs inside and lock the doors and close the windows because I might have to shoot it."

As I gathered up our dogs, closed the windows and began locking the doors I said, "Tony, I am scared of shotgun blasts so I am going to leave and go over to the Lodge to tell Frank what is going on..." as Tony was about to walk out the front door with his shot gun.

"No, Nance. Stay here. Hopefully, I won't have to shoot it." Then he closed the front door behind him and I waited nervously inside with my fur buddies. Ten minutes passed without gunfire and then T. knocked real hard on the front door and it nearly scared me to death! "It's me, Babe. Open the door!"

When Tony came inside he told me that the rattler was long gone and for me to go ahead and put Mama and Abbie back outside, but if they got to barking to bring them inside the house fast and then go outside and honk Buttermilk's horn, because it would take me too long to drive down and get him because of my problems doing The Procedure. Fortunately, I never had to honk Buttermilk's horn.

This afternoon Buttermilk took us to Kerrville to run a few errands. Our first stop was at the famous and fabuous Trail's End Guest House to see our good friends Desiree & David Farrar and Beckham, their gigantic soccer-playing wild hog that we rescued and they adopted for their B&B. Here is a picture that I took of him today. 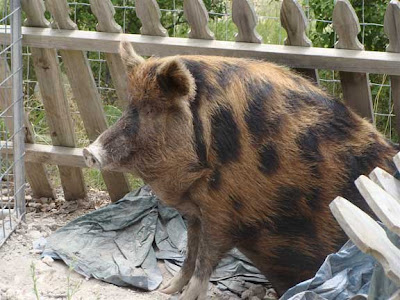 We had a great visit with D&D at their B&B and of course there was much laughing! They bought two of my books and I signed them as David told us about Beckham's latest escapades. "We're calling him Wilbur now and he is still as sweet as he can be even though he is so enormous. Everyday he gets to eat gourmet leftovers and the other day when I went out to feed him I had just opened up a can of cold diet orange soda and he really wanted it," David said. "He started grunting at me so I poured a little into the side of his mouth and he went crazy. His mouth started foaming and he was trying to stand up on the fence to get more so I gave him the can and he held it between his teeth and drank it all! He's one amazing hog..."

When I told Desiree and David about us wanting to come out for dinner either this week or next week with Sandy and Jon Wolfmueller, Kinky and his sweet sister Marcie they told me which days would be the best for them and I told them I would get back to them real soon. Just as Tony and I were fixin' to leave David left the room and then quickly returned with a beautiful, expensive platter of food for us to take home and enjoy! Thank you, David and Desiree!

After we left our dear friends at the Trails End Guest House we went to Wolfmueller's Books to talk to Sandy and Jon about having dinner with all of us. Sandy told me that this week wasn't good, but next week would work so we left their bookstore because it was full of customers.

Our last stop was at H.E.B. to pick up a few groceries. It was uneventful until a nice elderly woman walked up beside me next to the banana area near the front of the store and said really loud, "I love your lavender overalls! I mean, I really love your lavender overalls, girl!" I blushed and then thanked her as Tony stood over by the strawberries stand laughing at me!

When we returned home I had one new message on the machine. "Hey, Nance, it's Kinky! Marcie and I are at the ranch! Call me!" After I called him back, I made up a small sampler plate of David and Desiree's delicious homemade goat cheese, vegetables and bread and then T. and I went over to the Lodge to see Marcie and Kinky.

After howdies and hugs I set the plate down on the kitchen table and invited everyone to try our friends gourmet food. Kink and Marce thought the food was absolutely delicious and they asked me about it and that is when I made a fool out of myself. After I told them about the cheese I stupidly said if that is a word, "This is partisan bread that David makes everyday. Isn't it delicious!"

"Partisan?" Kinky asked as he put another piece of cheese covered bread into his mouth. Then we all started laughing and a few flakes flew out of his mouth.

"I mean artisan bread, Kink!" I said. "Marce, I haven't changed since you have been gone. I am still stupid!" Before leaving the Lodge we made plans to eat at the Trail's End Guest House next week, because Kinky has to go out of town on Thursday. See y'all soon D&D!

Y'all have a great evening!
Posted by cousin nancy at 8:31 PM