And Y'all Could Drive Me!

This morning when I checked my e-mail I had an exciting note from my dear friend John Kemmerly, who used to work for us. He was the official rescue ranch dog whisperer and our dogs loved him as much as we did. And in the Dedication in my latest book, which is still selling like hot cakes, I wrote:

"In Texas it is often said that you gotta dance with the one who brung you. This book is dedicated to my heroes: Tony Simons, Kinky Friedman, Ben Welch and John Kemmerly for dancing with me at the rescue ranch and never letting me know when I stepped on their boots. I love y'all so much!"

John has started a new business Bluefoot Publishing and it is literally going through the roof! When I went to the cool web site and checked it out, I was thrilled when I read: "Our goal is to find and publish writers of unique voice and talent! Each book will be a collection of poems, stories or travel essays from a variety of writers." I have a few short stories that I would love to get published so I am going to submit them in hopes that they will publish them.

John told me that people from all around the world are already submitting their work and he is in awe by the huge response they are getting. To all of my friends who are great writers I hope that you will check out www.bluefootpublishing.com and submit your stories, essays and poems to possibly be published. Wouldn't that be so cool for all of us to have our work in the same book! Just think, we could all go together to the book signings and y'all could drive me! I love it!

This afternoon Kinky called me to invite me to do two book signings with him in the very near future and they are very close to home! I told him that I would love to do them with him. And I promised him that I would not back out because I can gladly go anywhere within a fifty mile radius. Then I changed the subject and told him about John's new book publishing business. Kinky thought it sounded great and he asked me to tell John that he sends him his best.

This afternoon after reading about how bad most store bought flour tortillas are for you, because of all of the added harmful chemicals and bad ingredients in them, so I went online and found a recipe for homemade flour tortillas using only flour, water, salt, baking powder and olive oil.

I spent over an hour preparing the tortillas. I mixed up the ingredients, kneaded the dough, let it rest under a cloth for fifteen minutes, rolled them into balls and then let them and me rest again. Then I rolled them out to flatten them using one of my pretty cobalt blue drinking glasses, because I don't own a wooden rolling pin. Then I cooked them in a very hot skillet or so I thought.

I guess because I didn't use a rolling pin as instructed, that is the reason why they turned out to be another one of my classic cooking disasters because they were real thick like a pancake and were as hard as a brick. When I asked Tony to try one he winced before he took a bite. "Nance, they aren't fully cooked and they are too small!" T. said as he removed a piece of my wannabe tortilla from his mouth and threw it into the trash. After I re-cooked them he refused to eat one because the tortilla made a snapping noise when he tried to break off a little piece to sample, so I took this picture of them before throwing them out. 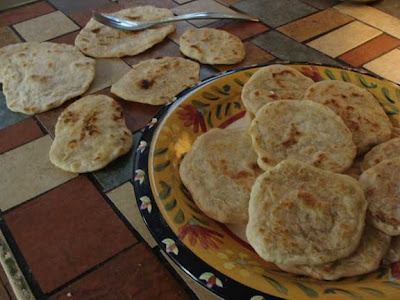 At seven-thirty this evening Kinky came over so he could have a picnic on the front porch with our old dogs: Toto, Thunder, Little Girl and Hank. He had cooked them up some chicken livers and our dogs nearly bit his fingers off as he hand fed them. After the fun picnic was over we went into Outer Space and had a very nice visit and talked about Marcie's arrival next Sunday and how much we were looking forward to seeing her.

P.S. As soon as the dates for our book signings are "set in stone" I will post the information.

Y'all have a great evening!
Posted by cousin nancy at 8:56 PM

Karen chastised me tonight when I told her that after reading your blog I sent you a marble rolling pin and a marble pastry board. She said that I should have sent you a silicone rolling pin, since the dough doesn't stick. But the blurb from Williams Sonoma said the marble keeps the dough cool, and is smooth. Anyhow, they are both on the way and should be there after May 11th (back ordered).

Also, we loved your book. And thanks.

Hi 'Erb and Karen! Oh my gosh, you are too sweet for sending me a marble rolling pin and a marble pastry board from Williams Sonoma! I can't believe it and I can't wait until it gets here! Thank y'all so much! I am sure that it will help me make better tortillas.

Thank y'all for ordering the books and I am glad that you loved it. Your comment has just made my day. Thank you!