Tonight's blog is going to be fairly short because Tony and I have basically been outside all day long mowing and edging the rescue ranch and it is now eight-fifteen and we just came inside. To say the least I am pooped and covered in grass and  dead weeds.

First off, I want to wish Karen Cares the Happiest Birthday ever and I hope that it has been a great one today! Secondly, I want to thank our dear friends and volunteers Lisa and Sidney for coming out late yesterday afternoon to visit with us and our dogs. And I want to thank Ellen, June, Eileen and Jim for coming out to walk our dogs and groom them. We loved it, but our dogs loved it more! All of Y'all Really Rock! Thank you so much!

This morning I didn't walk with Leslie inside, but I did walk, push-mowed and edged with Tony outside and my arms and legs are pretty sore. Hopefully I burned off a lot of calories.

Late this afternoon I took a much needed break from the overwhelming yard work and went over to the Lodge to visit with Kinky, Marcie and Will before a crew from San Antonio came out to interview and shoot Kinky for a documentary that they were doing on him.

When I arrived at the Lodge I was pleasantly surprised to also see Kinky's friends: Rambam, the famous international private eye, Washington Ratso and Dylan Ferrero! We talked and laughed as the men told us funny stories from their past. Rambam talked about the book that Kinky is writing about Rambams' most famous cases. Ratso and Dylan told us some very interesting and hilarious tales about their friends Bob Dylan, The Band and being at the filming of The Last Waltz and I was in total awe. Then the nice people from San Antone showed up to shoot and interview Kinky.

After introductions were made Marcie, T. and I visited quietly as we watched and listened as the crew interviewed and shot Kinky sitting at the picnic table. "Marcie," I whispered, "Kinky is doing great! He is such a natural when it comes to doing interviews and being in front of a camera..." Marcie nodded her head and totally agreed with me as Kink continued to answer one question after another and then he would say something that would make everyone laugh.

When the interview ended Kinky came over to us and said, "Nance, they want to go over to the rescue ranch to shoot you and me. Is that okay with you and Tone?" Then Kinky laughed and said under his breath, "I really like these people. They just told me that they had tried first to get Obama or Eva Longoria, but they got me." We all chuckled.

Ten minutes later everyone arrived at the rescue ranch to shoot us and our dogs. Talk about nice people! After they interviewed us and shot Kinky and me and our dogs we all went into Outer Space and had a fun visit. Before they left they asked to shoot a group picture so T. took this picture of us in front of my writing cabin. Washington Ratso is standing next to me. 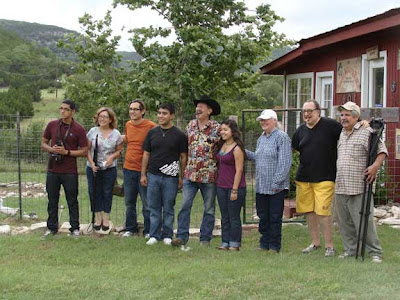 Y'all have a great evening! I am going to bed.
Posted by cousin nancy at 9:06 PM