Today has been great, but I am a little depressed for some reason. Maybe it is because I didn't sleep well last night. When I did sleep, I had really weird dreams to say the least. Who knows?

This morning after walking six miles I talked to my good friend "Sam" up in Johnson City. Bless her heart, she has been involved with a frustrating puppy rescue for months and she had called to see if we were ready to take one of the pups that I had promised months ago to take. I told her yes, so we made a plan to meet at Hoegemeyers Animal Clinic in Kerrville at one-thirty this afternoon.


After I talked with Sam I checked my e-mail and the note with pictures that I had received from my good friend Pete Harje, down in Port Aransas made me laugh out loud, because back in October he and his wife, Kelly adopted Smilin' Jack from us. Jack is an incredibly intelligent dog, extremely well trained, but at times he can be a handful because he is too smart.
For example, months ago Pete sent me an hilarious e-mail telling me that they loved Smilin' Jack. Then he went on to say that Jack knows how to open their refrigerator door and he helps himself to whatever is the fridge, etc. Well, here is the note with pictures that he sent to me today:

"I don't know. It's crazy. It just feels like where ever you go in the house you are being watched. Maybe we are infested by big black dogs.

I have been enjoying your new book. Like everything else these days, I've been doing it real slow.

Hope you and Tony are A Ok! We would love to make it up there. 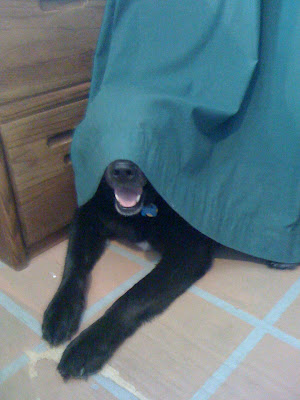 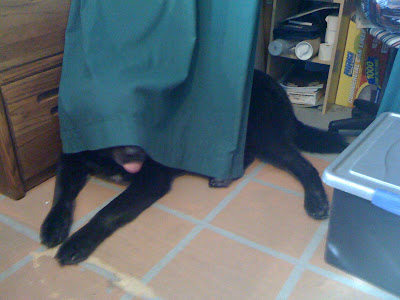 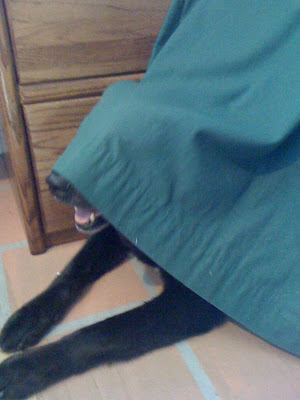 Late this morning Kinky called. He had returned to the ranch late last night and he was tired, so we decided to visit later this afternoon after he caught up with all of his business. After lunch Buttermilk took T. and me to Kerrville so we could run a few errands before meeting up with Sam at Hoegemeyers.
Our first stop was at H.E.B to get gas, then we went to Copies Plus, because Tony had some more beautiful post cards for her to print for him. When we walked inside her store she and her employee Marcie were busy with customers so we sat down and waited for our turn to be helped. As soon as the last customer was satisfied and had walked out the door Trisha said, "Nancy, I know that you have a thousand books that you are carrying around inside your car and I want to buy one of them and get you to sign it!"
After I signed the book, she talked to Tony about his post card order then when 'business' was over we had a short visit filled with laughter. After she and Marcie told us a funny story about a customer I told them a story about when Jim and I owned an embroidery shop in Austin.
"One day back in the early 90's Jim and I were trying to make a deadline and these two uppity, young nouveau-rich women, who were probably in their late twenties, came into our shop and they started being rude to Jim and saying things like, 'Are you sure you know how to do this?' They asked even though it was an easy job and didn't take a rocket scientist to figure it out."
"Well, as I sewed logos in the back of the shop I was getting angrier by the minute, as they insulted Jim who was ten times smarter and nicer than they were. Now, before I tell you the ending to this story you need to know that an attorney friend of ours Patrick G. was with the Naval Intelligence Agency and he wanted to have some polo shirts embroidered with the N.I.A.'s logo on it, so he could give them to his friends in Washington D.C.  We told Patrick that before we could sew the logo on the shirts we would need someone from D.C. to authorize it. Patrick understood and told us that he would get his friend in D.C. to call us to confirm that it was okay for us to embroider their logo on his shirts."
"Nance," Tony said wearing a big smile on his face, "you're making a short story really long, again." We all laughed.
"Okay, Tone. I will finish it. So, I'm madder than you-know-what and while smoke is starting to come out of my ears as I'm sewing, the phone rings and I pick it up. "P.D.Q.! How can I help you?"
"Hello, this is General So-In-So at the Pentagon. I am calling about the shirts that Patrick G. wants to get embroidered with our logo..."
"Just a second, sir." I said as I covered the mouthpiece. "Excuse me ladies. Jim, it's General So-In-So at the Pentagon and he needs to talk to you immediately! I'll finish up with the ladies order."
"After I handed the phone to Jim I went up to the counter and finished taking the wannabe ladies order and said nothing as they tried to listen to Jim and figure out why a General from the Pentagon was calling a small embroidery shop in Westlake, Texas! It drove them crazy and I charged them double! We never posted our prices and we charged our customers by attitude!" We laughed and then a customer entered the print shop so we left.
When we arrived at Hoegemeyers Sam was already there waiting for us in the parking lot. After we met the sweet, five month old, little dog we went inside. After we asked Susan, their friendly receptionist to give the pup all of her shots, do a skin scraping and spay her, we left the clinic and went down the road to Randy and Lisa's Save Inn Restaurant for tea and a short visit.
When the friendly waitress served us our drinks she told us about Lisa's homemade desserts, so we all ordered peach cobbler with a scoop of ice cream. OMG! Talk about delicious! We had a fun visit with Sam as we gobbled up our cobblers. At two-twenty we said goodbye to each other in the parking lot and then T. and I came home.
After returning several phone calls I did something that I haven't done in over ten years—I made Fannie Farmer's white bread from scratch—thanks to 'Erb's and Karen's Care 'Care Package.' Thank you, Karen and 'Erb! I love that marble pastry board so much and it loves me because the bread is absolutely delicious! Here is a before and after picture. 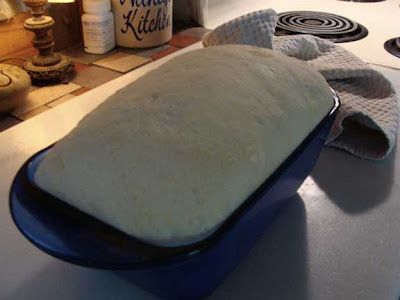 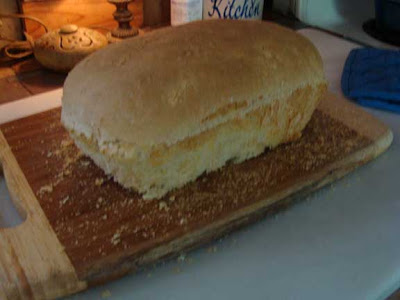 This evening I went over to the Lodge to visit with Marcie and Kinky so I could 'break-bread' with them and they loved it and told me that it was delicious! Then I came back home and took these two pictures of the beautiful Hummingbirds out on our front porch. 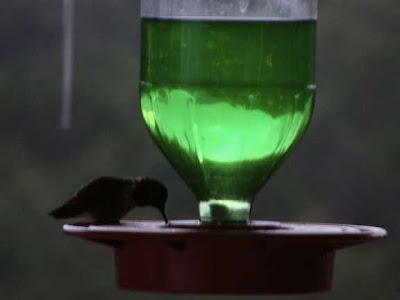 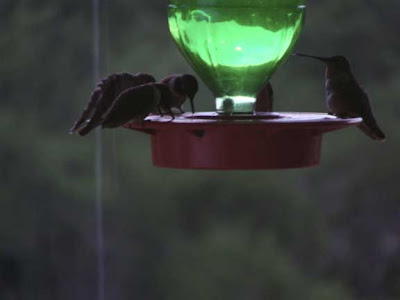 Y'all have a great evening!
Posted by cousin nancy at 9:09 PM