Today has been fun and exciting. This morning our great volunteers Matt and Meghann showed up early this morning to help Tony with his chores while I was over at the Lodge visiting with Kinky, Marcie and  New York Ratso. Unfortunately when I returned to the rescue ranch they had already left to go back to Kerrville. Thank you, Matt and Meghann!

Then Eileen Gotke showed up, so I went to greet her. She told me that she had brought out a crate for her soon to be adopted puppy, Callie aka Rita Coolidge. "I want to put it in her pen so she can get used to it before I take her home," Eileen explained. We went to the puppy pen and played with Callie and her new roommate Princess Leaha. Twenty minutes later Eileen put Callie's little harness on her and took her for a long walk so I went to help Tony pick up poop.

When we had only two more dog pens to clean I saw T. take out his camera in the alley next to Ben Stiller and Gracie and start shooting pictures of the ground. "What are you doing, Tone?" I asked. He laughed and then he bent down and picked up a big snake! "Yikes!" I half-hollered.

Then Tony told me that it was just a grass snake that was harmless which didn't help calm my nerves at all. Here are a couple of Tone's pictures of our unwanted visitor. 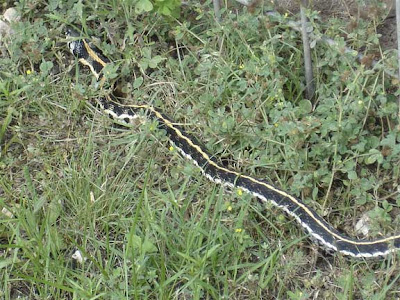 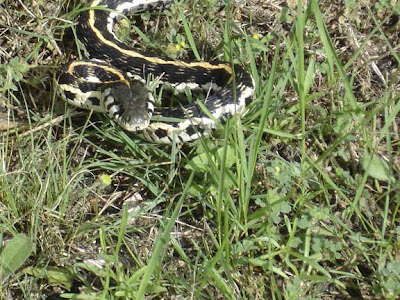 Early this evening as Buttermilk took us to Ellen Jackson's house in Kerrville for dinner and so we could visit with her newly adopted dog Jermaine Jackson, Tony tells me that today is Ellen's birthday. I felt terrible because I hadn't known and I didn't even have a birthday card to give her.
When we arrived Eileen Gotke had already arrived and she let us in the door because Ellen was taking a 'Happy Birthday' phone call so the three of us played with Jermaine and Twinkie. When Ellen got off of the phone we wished her a happy birthday and then the non-stop laughter began. Here is a picture of Eileen helping Ellen prepare a delicious salad which consisted of a leaf of lettuce, topped with cut-up red grapefruit and avocado slices drizzled in French dressing. 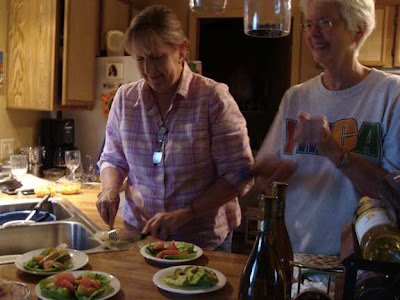 When Ellen's Chicken Spaghetti was ready to eat we went outside to Ellen's "Outer Space" (screened-in porch) and ate our dinner by candlelight. After my first bite of Ellen's delicious chicken spaghetti I asked her for the recipe and she told me she would write it down for me. Little did Ellen know that I plan to take her recipe and steal it like all of the others that I've stolen from friends and rename it Cousin Nancy's Chicken Spaghetti.
Our dinner was so much fun as we ate, laughed, sipped our wine and traded funny stories. After we ate Ellen's delicious Fudge Pie for dessert I also asked her for that recipe too and she told me that she would give it to me before we left. How sad. Here it was her birthday—and Ellen had no clue that by morning I would claim her prize winning recipes and call them mine.
When we were about to leave to go home I took this picture of Eileen sitting with Jermaine and Twinkie while Ellen quickly printed out her chicken spaghetti recipe and wrote down her fudge pie recipe for me.
I felt sort of guilty when Ellen handed me her families secret recipes, along with some plastic containers full of her chicken spaghetti and fudge pie that she had made for us. 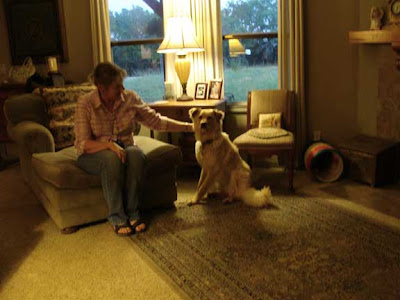 I looked up your snake in my Texas Snakes book and it's an Eastern Black-necked Garter snake! Common in our area it says. I know that makes you feel better -- NOT!

Hi Eileen! Thank you for looking it up. NOT!!!

Ok I give up. Where is Twinkie in the picture with Ellen and Jermaine? This is worse than Where's Waldo? for me!

Yes, I'm going blind and deaf in addition to getting all the other infirmities of old age, too! (Getting old is not for sissies!)

Hi Mari! Laugh out loud! Twinkie is Ellen's invisible dog. Not really—I made a mistake! : )