Today has been good, a little weird, but good. This morning after I walked six miles with Leslie Sansone while Tony was outside doing his chores my big toe started aching for some reason, so I took a look at it.
When I examined it it looked fine and it didn't hurt when I wiggled my toes or when I touched it, so I blew it off.

By the time Tony came inside for lunch I had accomplished much. I was totally caught up with returning phone calls, e-mails and my paperwork. During lunch I told T. about my toe trouble. "My toe doesn't hurt at all, but about every five or six minutes it cramps up and hurts for about two seconds or less. Ouch! It just did it again!" Tony scratched his head and had nothing to say.

After I cleaned up the kitchen we took off for Kerrville to run some errands. Our last stop was at Walmart to get some dog food. As we entered their garden department I saw some pretty blue flowers and stopped to admire them and to see how much they cost. They were twelve dollars and fifty cents, so I started to walk on because I am in a thrift mode right now, due to the wonderful economy that we all are having to enjoy whether we like it or not. "Wait up, Nance!" Tone said.

When I turned around he was carrying the flowers and put them into our cart. "I'm getting these for you." To say the least, I was thrilled! When we entered the store we turned on our cell phones and went off in different directions. Five minutes later as I was about to get some orange juice, a woman about ten feet away from me screamed at the top of her lungs with a jug of milk in her hands and she scared the you know what out of me! Then she muttered some cuss words to herself about always getting shocked when she opens the blasted refrigerated door to get some milk out. Then she looked at me and ran right up to me and loudly said, "I love those flowers! They are so beautiful! What kind of flowers are they?"

Everybody in the dairy and juice department were looking at us and I didn't know what to say, so I turned five shades of red. Then I softly said, "I don't know." Then without asking me, she reached into my cart and pulled out the plant's info stick that was inserted into the dirt! Then she placed it back into the dirt and quickly walked away with her milk, while I speed punched Tony's cell number.

"Tone, we need to get out of here right now! Weird people are inside Walmart today, because of Mercury being in retrograde. Meet me up front by the magazines! Bye." Two minutes later I was telling Tony all about the weird Walmart shopper as we stood in line to check out. Right after I had told him about the incident a woman rushes over to us from two isles over.

"What kind of flowers are those?" She asked, half-hollering at us. "They are sooooo beautiful!" I shrugged and told her that I didn't know, while T.'s face turned the color of our red barn outside, as he fumbled to find the flower's information stick.

"Lobelia Blue and Osteospermum Yellow," Tony said as he showed the woman the plastic information stick to prove that he was telling her the truth. Then she walked off as fast as she had walked up, and then we checked out and came home without a hitch.

As soon as we came inside the trailer I checked my e-mail. I had twenty-seven new ones. Then I checked PayPal to see how many more books had sold and that made me smile, but when I checked my blog to see if I had any new comments to post, the comment from my dear friend 'Erb made me smile from ear-to-ear. "Erb wrote after reading about my tortilla disaster the other day:

Karen chastised me tonight when I told her that after reading your blog I sent you a marble rolling pin and a marble pastry board. She said that I should have sent you a silicone rolling pin, since the dough doesn't stick. But the blurb from the Williams Sonoma said the marble keeps the dough cool and is smooth.

Anyhow, they are both on the way and should be there after May 11th (back ordered).

Also, we loved your book. And thanks.

Talk about making my day! I can't wait to get them and try to make tortillas again! Thank you, "Erb and Karen! If they turn out okay, I will ship some up to y'all.  Thank you so much! Who knows? Maybe I will do a another "cooking show!"

Here is a picture I took of my new flowers, Lobelia Blue and Osteospermum Yellow: 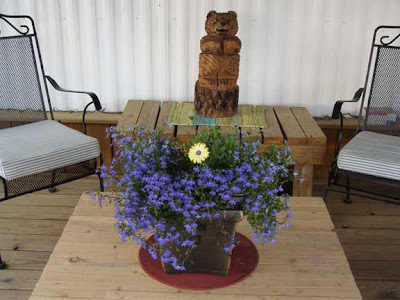 Y'all have a great evening!
Posted by cousin nancy at 8:44 PM

OMG - I did not think I would be able to finish reading this blog post because I was laughing so hard tears were blurring my vision! I am up here in Fort Worth for 3 days of dog agility and I am sure the La Quinta manager will ring my room soon and say that other guests have complained about my loud laughing! (Or maybe they'll just attribute it to Mercury in retrograde?)

Between your adventures at Wal-Mart and those emails that come around featuring the 'people of Wal-Mart', I have become very grateful to the late Sam Walton for establishing such a place - so capable of producing MUCH LAUGHING OUT LOUD! (And no matter what the other La Quinta guests might think, such laughter is good for the soul!)

Keep on posting, Nancy - you actually make me look forward to Mercury being in retrograde so I can read about your 'weird' experiences that happen during that time!

i want those dogs! and you are dehydrated;toes cramping. bless you all, bless those pups and all your sweet hearts. bless the sweet man overwhelmed by all. the blog illustrations-stunning.

Mari, I love those Walmart e-mails that you send me and I am glad that my 'weird' Mercury in retrograde experiences make you laugh out loud. On May 11th Mercury goes out of retrograde, but will have a lingering effect for about four more days, so the countdown is on! And don't forget that we have the full moon coming soon.

Anon, thank you for your diagnosis, because you were right. After drinking gallons of water the cramping stopped, but my stomach made sloshing sounds with every step that I took.

Thank y'all for your comments.