Tony's In The DOGHOUSE!

Today has been really weird to say the least. My morning started out great. I walked six miles and had all of my chores done by ten o'clock. Then things went south real fast, when a dear friend called me with some very upsetting news. To cheer myself up I went outside to thank and to visit with our incredibly, great, dedicated-dog-walking volunteers: June, Ellen, Eileen, Jim, Lisa and Matt because they always cheer me up and get me to laughing.

When I caught up with Team JEE (June, Ellen and Eileen) I teased Eileen about Ellen, June and me playing a joke on her last week on my blog and she laughed and thought it was funny. Then I asked her if she was going to take the Beginners Drum course with me this Sunday afternoon with Donna "The Drummer" Schloss and she shook her head no, and then she showed me why. She held up her swollen wrist that she got last week in her Beginners Motorcycle course—when she fell over three times with the motorcycle.

After having a good time outside visiting with everyone I came back inside and turned on my music to help keep me in good spirits and since Tony was gone I cranked it up pretty loud. (This morning at 9:30 Tony finally took a day off, and went to Bass Pro in San Antonio to shop with his brother Sam.) Then there was knock on the door—it was Team L&M (Lisa and Matt) and I invited them inside for a fun visit.

After they left to go do some of Tony's chores Kinky called—he was back at the ranch and he wanted me to come over for a visit. After catching up with each others news I returned to the rescue ranch because Paul was due to arrive any minute with some more free dog food.

Paul arrived about ten minutes after I got back to the rescue ranch. Lisa and Matt helped us unload the taped up bags of free food from Paul's truck and then they went back to work as Paul and I visited out by the barn.

After Paul and Team L&M (Which also includes Meghan when she can make it.) left the rescue ranch I locked our gate and then went inside the trailer to return a few phone calls.

At three o'clock Tony walked inside the trailer wearing a great big smile on his face. "Did you get it?" I asked.

Tony shook his head yes, and then he told me all about his new portable ground blind made by DOGHOUSE that he is going to use for his picture-taking of the wildlife on the ranch. "It is really neat! It only weighs fourteen pounds, has room inside for two chairs so you can go with me and take pictures, a cool LED light that hangs from the ceilng, four windows and three portholes and..."

"I want to see it. Why don't you bring it inside and set it up in the kitchen?" I asked. Two minutes later I took these pictures of Tony's toy-tent-turned-photo-booth. The first picture is Thunder standing by the box and the other two show how compact it is: 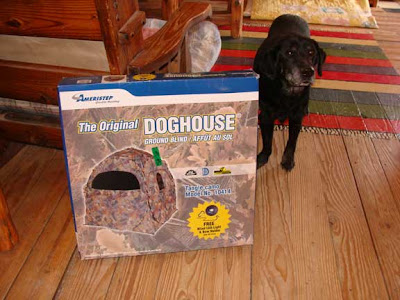 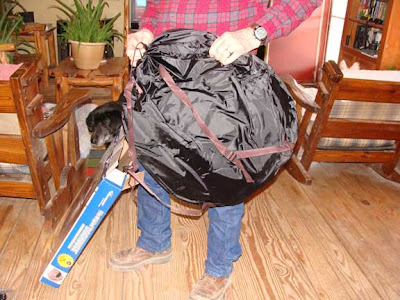 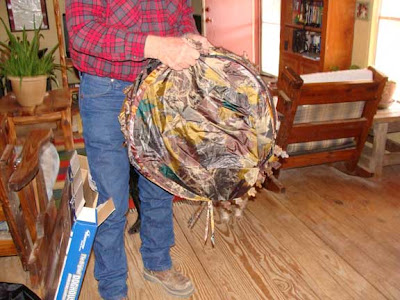 When Tony pulled it out of the bag he said, "All you have to do is shake it and it springs into a tent. Stand back." Then he shook it and scared the dogs and me when it suddenly took shape and filled up the kitchen space and that is when I grabbed my camera and shot this video of the photo-booth.

After I turned off the camera Tony read the instructions on how to collapse it and get it back into its carrying case but it wasn't as easy as it looked. After we spent over fifteen minutes wrestling with the contraption I went online and we watched a video on how to collapse it. We had to watch the video three times before Tony and I had it packed into its zippered bag.