The Chihuahuas Are Coming!

Well I am glad that yesterday was peaceful and quiet because today a lot has happened and it was all good. This morning while I was drinking one of my super healthy-smoothies for breakfast I realized that it is only twenty-six days until my drum class for beginners and I can't wait, even though I have not had any time to secretly practice on my pretty lavender colored drum pad.

While I was walking with Leslie I decided to walk eight miles, again so I could get a nice head start on this months 140 miles. So as of this morning's walk I only have a 124 miles to go!

Around eleven o'clock I went outside to thank and to visit with our super volunteers but they were all  out walking dogs so I went into Nellybelle's and Hank's pen so I could take a picture of him for our utopiarescue.com web site. The original pictures that I took of Hank Hill were not great pictures because they showed Hank as a scared and unhappy dog and I do not like to use pictures like that on our web site because no one will want to adopt him.

When I went into their pen I gave them a couple of treats and then they took turns jumping up on me for more treats and their tails were wagging high. Normally we don't encourage dogs to jump up on us but it was okay for Hank because he was showing his love and giving me kisses. Here is the picture that will be going up on our Utopia site in a few days. Doesn't Hank Hill look fantastic! He has definitely gotten his confidence back. I am so in love with this magnificent dog and so proud of him. 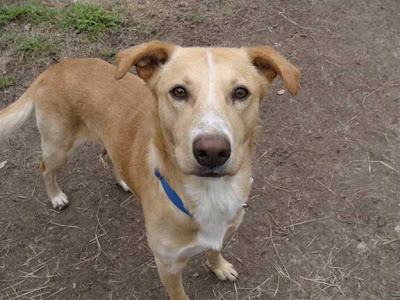 While I was playing with Hank and Nelly—Lisa, Meghan, Bethany, Carly, Steve and Don returned from their dog walk and I had a fun visit with all of them as we took turns praising and talking to Hank. During our visit I glanced back and saw Hank standing up on his hind legs kissing Meghan on her face!
As we were saying good-bye to Lisa and her troop of super volunteers a pickup truck drove slowly into the rescue ranch. "The Chihuahuas are coming!" Tony said as Lisa and her friends drove off. "Nance, meet me down at the puppy pen." I started walking down to the puppy pen as Tony went to greet the man who could no longer keep his two little dogs.
Five minutes later the three of us were standing inside the puppy pen with two cute dogs and talking to the man about his dogs that we had agreed to take. I didn't like the names that he had given them so after he left I renamed them, then we took them to Hoegemeyers Animal Clinic to get them spayed and given all of their shots.
These pictures that I took of them are not all that great because they were squirming in Tony's and the man's arms but I want to show them anyway. Please meet Bonnie Raitt. She is about seven months old and as sweet as she can be. 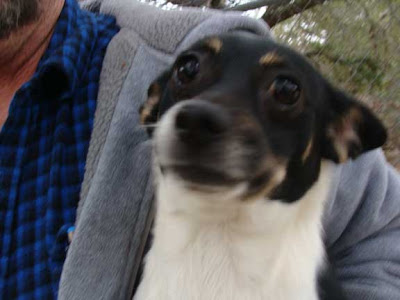 And this is a picture of Sheryl Crow who is about one and a half years old and Bonnie's mama. Sheryl is a sweetie pie, too and loves to cuddle and give away kisses. (I know that in real life Bonnie Raitt is much older than Sheryl Crow, but to make it simple for us and our volunteers to remember these cute dogs names I named the little black one Sheryl Crow because crows are black.) 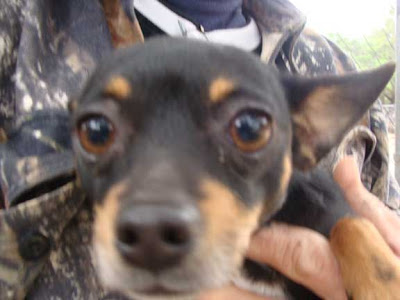 After Tony and I dropped off the girls at Hoegemeyers we went to Wolfmueller's Books so I could buy a copy of my book so I could give it to Josh, who was coming out to the rescue ranch at three o'clock for a tour. When we arrived at Kerrville's favorite bookstore we found Mary Jo holding down the fort for Sandy and Jon. We had a short but fun visit with her and then we went to Randy and Lisa's Save Inn Restaurant for lunch.
Angie, their sweet, upbeat waitress waited on us and she had us laughing before we even gave her our order. Our lunch was delicious and fun as always. While T. paid for our lunch at the cash register, I asked Angie to please tell Lisa and her daughter-in-law Trish, over at Copies Plus, that I hoped that they were taking the beginners drum course with me, Lisa, Sara and Donna "The Drummer" Schloss and she said she would. After our bill was paid we went to Walmart to buy dog food then Buttermilk took us home.
At three o'clock sharp Josh arrived at the rescue ranch. After Tone and I greeted him I gave Josh a tour of the rescue ranch and he seemed impressed with it. Then I gave him an autographed copy of my book so he could learn more about us because his new company wants to help us. After a short visit inside the trailer, Kermit took Josh and me over the river and through the woods to the Lodge so Kinky could meet Josh and it was a fun visit. Here is a picture that I took of Kinky and Josh in Kinky's office. 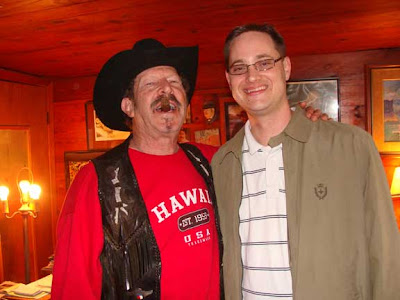 After Josh left I came inside the trailer to find that I had twenty-seven new phone calls to return, most of them were from people wanting us to take their dogs. I returned half of them and plan on calling the rest of the people back tomorrow morning after I walk the walk with Leslie Sansone. I may try to walk another eight miles if my old body is up for it. Wish me luck.
Y'all have a great evening!
Posted by cousin nancy at 7:45 PM

"Hank Hill" looks great, he is one happy guy! I read the entire blog and it didn't soak in that you gave him "Hill" for his last name, thanks, he just reminded me of the Texas, King of the Hill, Hank. Harley's pet of the week "Marlin" is a spittin' image of our Black Lab named "Mikey". If anybody out there is looking for a fun, smart and kinda goofy dog that is good with kids, I doubt that you will ever regret adopting Marlin. Love the names for the Cihuahuas, and the pix aren't that bad either!

I absolutely was impressed. You guys run a quality and loving operation there. It is apparent!

Meeting Kinky was something I will truly never forget. I wish I could vote twice.

Hi Roger and Josh! Thank y'all for the comments.