The Harleys And The Hog!

Today has been a great day even though it has been a long one. At seven-forty-five this morning I was live on the air talking to Harley Belew about our dogs. Harley's Pet of the Week was Bonnie Raitt, and I told him all about her and her mother, Sheryl Crow our two little Chihuahuas. And as always Harley had me laughing from the get go.

After I did The Harley Show a man called me about the Chihuahuas and wanted to know more about them. Before I had finished telling him all about the girls he told me that he was going to come out tomorrow morning and was probably going to adopt one of them. His good news set the mood for my day.

Late last night Kinky returned to the ranch after being on the road for several days. Around eleven o'clock this morning he called me right after I had walked my six miles to invite me to come over and drink a cup of coffee with him so we could catch up with each other's news. I told him that I would love to come over, but I could only stay for ten or fifteen minutes because I had to get back to the trailer so I could cook lunch for Tone and me. "Tony!" I half-hollered down the hallway. "I'm going over to the Lodge and will be back in about fifteen minutes." Little did I know that I had just lied to Kinky and T.

As I sipped my coffee at the kitchen table Kinky told me that some people would be arriving shortly for a camera shoot for a magazine cover about Harley Davidson motorcycles. Then he told me this afternoon David Woo was coming out to take pictures of him and our rescue ranch for The Dallas Morning News, while he was being interviewed by Jessica Meyers, a staff writer for the newspaper and Jason was going to be driving her down to the ranch. Then Kinky dropped the bomb on me and told me that he wanted her to interview me, too.

As you know I dislike being interviewed because I always wind up sounding like a complete idiot so I pointed that out to Kinky but he ignored me and told me not to worry about it. "That's easier said than done," I said. "Thanks a lot." Then the camera crew arrived and we left the Lodge to go greet them down by the dining hall where the camera shoot was going to take place.

After introductions and handshakes the friendly crew began setting up for the camera shoot inside the dining hall while we visited with the crew. Here are a couple of pictures I took of Kinky sitting on one of their beautiful Harleys and the second picture is of Kinky visiting with Jim and Bubba. (Bubba is the tall one.) 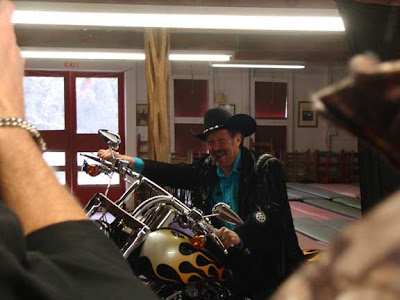 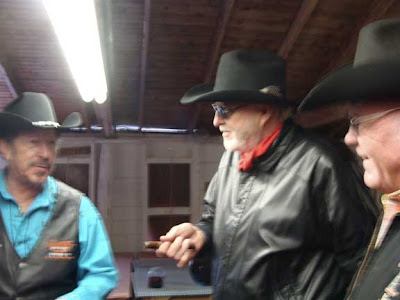 After the crew was done shooting Kinky we all went up to the Lodge for coffee and a visit. We had a really fun visit with everyone. They were all so nice. Before leaving Craig Slovak, the General Manager for Republic Harley Davidson down in Stafford, Texas told us that he loves dogs and he wants to do a Harley ride for our rescue ranch to raise money for us in April! Kinky and I were thrilled. And, talk about a small world—Jim is friends with Rick Reichenbach, our dear friend down in Port Aransas. (Rick, he told me to tell you hello. He is the man who rebuilt the wooden water barrels.)
When they left to go pack up their camera equipment David Woo arrived. David is an outstanding photographer from Dallas who shot Kinky with one of our pigs years ago, for his and Richard Pruitt's star-studded coffee table book Top Dogs And Their Pets. Check out his awesome picture of Kinky that is in this beautiful book. I love it! I just wish that I could remember the pig's name.
Before David, Kinky and I headed over to the rescue ranch David asked Kinky to sign a few of his poster sized pictures of Kinky with our pig and then he gave me a poster and a couple for us to auction off to raise money for our rescue ranch! David told me that the posters should be sold for a minimum of $250.00 each. So if any of y'all want to buy an autographed copy please give me a call.
While Kinky signed the posters David and I laughed about the day that he came out to photograph Kinky. It was a hotter than hot day and our pigs did not want their pictures taken with Kinky no matter how hard he tried to entice them to pose with him. Finally, when Tone went and got some corn and scattered it for the hogs to eat, David was able to capture the perfect pig pose with Kinky. I can't wait to get Kinky to sign my poster and get it framed! Thank you, David.
After the poster signing party we went over to the rescue ranch so David could start shooting Kinky. David shot him in Outer Space, our screened-in porch, and inside the trailer before Jessica and Jason arrived.
Since it was raining hard outside Jessica interviewed Kinky in "the big room" inside the trailer as David snapped away on his camera while Jason, Tony and I watched and listened. During a break I showed Jason, David and Jessica the beautiful cedar bed that Tony made for us when we got married and they thought it was awesome of course. In fact, David went and got his camera and started taking pictures of our bedroom! "Y'all," I proudly bragged, "our bed and bedroom has been on the cover of the Chicago Tribune years ago. Our dear friend Bill Hageman who writes the papers most popular column for them took the pictures and..." After the bedroom tour we went outside to show David and Jessica our dogs. Here are a couple of pictures that Tony took of us outside. From left to right: David, me, Jessica and Kinky. (And just so you will know, the reason that I look fat is because I am wearing a down vest inside my jacket.)
This is a picture of Kinky talking to Jason and David. 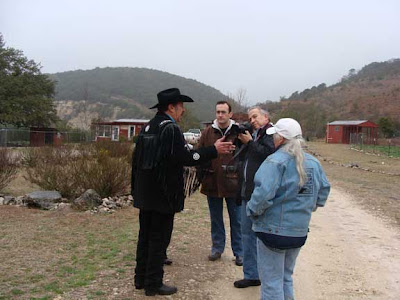 When I introduced them to Hank and told them his incredible rescue story they went inside the pen to pet him and Nellybelle. When they came out of the pen they were covered in mud. Fortunately, they all laughed about it and it didn't seem to bother them.
Before leaving the rescue ranch Jessica interviewed me, and then I told her about my book that I wrote for the University of Texas Press in '06 and then Jason told her that his dog, Echo's (formerly Sponge Bob) story that he adopted from us years ago, was in my book.
After they left the rescue ranch I checked my answering machine messages thank goodness. A woman named Donna had called and she had heard me on The Harley Show this morning and was interested in adopting one of our Chihuahuas, so I called her back immediately. Then I went back over to the Lodge to visit with Jessica, Jason and Kinky.
At five-thirty I returned to the rescue ranch and cooked dinner for Tony and me since we had missed lunch.
Tonight at seven-thirty Sheryl Crow was adopted in the dark. Yes, she has found her forever home and we have our fingers crossed that her adoption will stick. Here is a picture of Donna's daughter with her new forever friend. 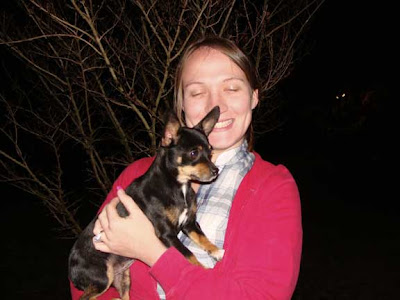 I also have my fingers crossed that Bonnie Raitt will find her forever home tomorrow morning. It's late and I need to go to bed. Good night.
P.S. I want to thank Lisa, Matt, Meghan and Don for coming out this morning and helping Tony with his chores and walking our dogs. We love y'all!
Y'all have a great evening!
Posted by cousin nancy at 10:08 PM