This morning I went outside when Lisa, Meghan, Melody and Don arrived at the rescue ranch to help Tony and to walk our dogs. When I caught up with them Lisa introduced me to a new volunteer, her friend Bowen. After handshakes and hugs I had a fun but short visit with all of them. We are so lucky to have the best volunteers in Texas.

When I came inside to walk the walk I realized that I didn't have the time to do it because Michael, the nice man that had called me yesterday about possibly adopting one of our Chihuahuas, was due to be out here in fifteen minutes so I went ahead and filled out Bonnie's adoption papers in hopes that Michael wanted to adopt her. Then I returned a few phone calls.

Five minutes later as I was hanging up the phone T. walked inside the trailer. "Nance, I hope that you have Bonnie Raitt's papers ready because Michael wants to adopt her! He is a really nice man and Bonnie fell in love with him the minute she met him." Then Tony went to the door and invited Michael inside the trailer to fill out Bonnie's adoption papers.

While he filled out the forms we talked about Bonnie. Michael told me that he really liked her and thought she was really cute. She will be a house dog and will get to go everywhere that Michael goes and he promised to spoil her rotten!

After Michael signed on the dotted line we went outside to get Bonnie. "Darn it!" Michael said as we were walking down the steps. "I meant to bring a blanket for her but I forgot to bring one. I always kept one in my truck for my last dog so it would always be warm." Tony looked at me and smiled as he climbed into Kermit and then he asked Michael to follow him in his pickup. I told Tone that I wanted to walk down to the pen so he took off in Kermit. He stopped briefly at the barn to grab a new pink baby blanket for Bonnie, that our friend Jim Callahan had recently donated to us, and then T. took off for Bonnie's pen.

When we reached the pen Bonnie was bouncing up and down with excitement because she knew it was her day to be adopted. After Tony handed the pretty baby blanket to Michael he went into the pen and picked up Bonnie. When he handed her over to Michael she was so excited all she could do was squirm in Michael's arms and give him kisses. "I think Bonnie can't wait to get out of here," I joked. Here is a picture of Bonnie when we arrived at her pen and the other picture is of Bonnie thanking Michael for giving her a fantastic forever home. 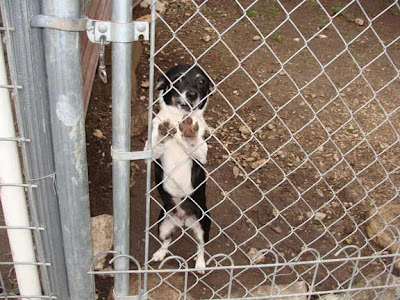 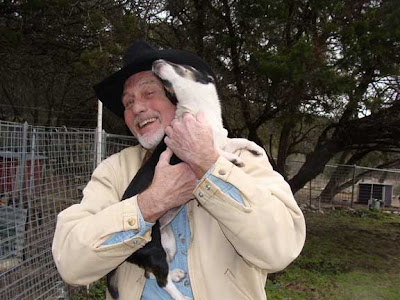 After Michael and Bonnie drove away I returned to the trailer and called Kinky to tell him about Bonnie's super adoption. "...Kinky, we've adopted out three dogs in five days! Jill, Sheryl Crow and now Bonnie!..." Kinky was thrilled to say the least.
Since I didn't get to walk today I guess that I will do a couple of eight mile walks to make up for it. I am watching the 2010 Olympics and Canada really ROCKS! And, I just went online and bought the new version of "We Are The World" for Haiti.
Y'all have a great evening!
Posted by cousin nancy at 8:22 PM

Good job everybody, that's what makes it all worthwhile. Bonnie and Micheal are nuts about each other, I don't think she will lack for anything. That makes my day!