It's Saturday evening and I am watching "The Queen" on TV starring Helen Mirren. I watched that movie last year and found the Queen of England to be someone that I never want to meet or know because I don't like snooty people. And that is why I am writing this short blog.

Late this afternoon Tony and I went to Walmart in Kerrville to get a few supplies. Before getting out of Buttermilk we made a bet if we would see someone we knew. T. said we wouldn't and I said we would.
After closing my door, I laughed out loud because Laura, Mary Jo's daughter was two cars down loading up her groceries. "Hi Laura...! After visiting with her for a couple of minutes I bragged about winning the bet with Tone as we walked towards the store.

Twenty minutes later we were in the process of being checked out by a very friendly, cute and courteous young man when the Queen of Walmart arrived two carts behind us and we didn't even know it until our last item which was a box of my Franzia Chillable Red wine wouldn't scan.

The friendly upbeat checker tried scanning my fine boxed wine on all sides but nothing worked. Then he looked at the bottom of the wine box and said, "They sealed the bottom of the box wrong and the scanning numbers are hidden. I'm sorry. Do you know how much it is?" We shook our heads no so the sweet kid called for assistance on isle ten.

Seconds later a nice woman came to our check out counter and then she took off to get another box of fine wine so it could be scanned. While she was gone wine box hunting, the Queen of Walmart reared her ugly brunette head. In a very loud voice she said, "What in the world is going on here? Would someone please explain to me why I am standing in this line and nothing is happening! Is there some kind of a problem?" The cashier blushed and so did I. I felt embarrassed for the kid.

"Yes, there is a problem," I said in a soft calm voice even though I was mad about her being so rude. "My expensive fine wine box won't scan and we are waiting for a woman to return with a scannable box of wine." Then I did something that I never do, because I hate it when snooty people roll their eyes and shake their heads in disgust. After rolling my eyes and shaking my head I shot her a look, and then I apologized to the couple next in line. They smiled and told me it was no big deal. Then we watched the snobbish woman yank her cart out of the line and take off in a huff.

A minute later the woman showed up with a scannable box of wine and I wrote a check for our groceries. On our way out of the store we saw the Queen impatiently waiting in line behind three carts and we laughed. On our way to Buttermilk T. mocked her and we laughed. "Tone, I wish I had told her that  there wasn't any problem at all and that we had just decided to take a five minute break here..."

The moral of this story is to just be nice, and to always remember that anyone who shops at Wally World is not qualified to ever act like a rich snob who thinks that they are more important than anyone else.

When T. and I got home we had two messages on our answering machine. One was from our friend Rick, the friendly lighthouse keeper, and Ruth Buzzi! Ruthie had a question and Rick wanted to let us know that Squirt, Leisa's little dog that she rescued from their pound, had won the wiener dog race in Port Aransas! Rick was so excited! "Squirt's the fastest dog in Port Aransas!" Rick said sounding like a proud father bragging about his child! Congratulations Squirt! 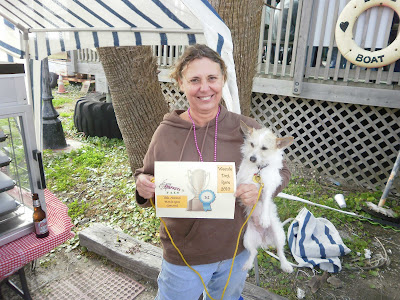 Y'all have a great evening!
Posted by cousin nancy at 8:30 AM

Well, rich or not, nobody should act like they are more important than anybody else, right? :) BTW I love that boxed wine. Prefer the Merlot or the Cabernet Sauvignon. My taste buds like it and you can't beat the price! I read somewhere that 70% of the people in France drink boxed wine. Aren't they the experts? :)

Yes, I think they are the experts but not sure. Thanks for the comment.