Willie Nelson and Nugent—Team Up!

Friday, I didn't post a blog, because nothing really exciting happened out here. It was a great day—just no news to report.

This morning, Linda T. arrived at ten-thirty, to walk our dogs for us! As soon as she arrived, she and Aaron started walking them and the dogs loved it! Thank you Linda and Aaron!

Around eleven-thirty, my dogs started barking, so I went outside to see who it was. "Hi! I'm David. I am a friend of Tony's, and I came out to adopt a dog from y'all!"

Tony stepped out onto the porch, "Hi David. I'm glad that you came out. Let me show you our dogs." Tony then took him and his family for a tour. I didn't go because it was drizzling outside, and I needed to start fixing our lunch.

Twenty minutes later, Tony walked inside the trailer. "They want to adopt Willie Nelson!" Tone said, with excitement in his voice! I was thrilled, and quickly began preparing Willie's adoption papers. I was so happy for him!

A year ago, on April 17th, Willie Nelson and his sister, Bobbie came to the rescue ranch. Willie Nelson, had called Kinky, a few days earlier, telling him about two dogs, that were street dogs, that he had seen running up and down I-35, near Abbott, Texas. Willie asked Kinky if we could take them, if he could get someone to catch them and bring them to us, because he was certain—that they would get run over soon. Kinky then asks Tony and me to come over to the Lodge. As soon as we arrived, Kinky tells us about the two dogs. In less than one minute, Kinky, Tony and I said yes—we would take them. Before we left the Lodge, I had already decided to name these two dogs after Willie and his sister, Bobbie.

When the man delivered Willie and Bobbie, late in the evening, Willie and Bobbie were stressed out, and they didn't want to have anything to do with us—people were not to be trusted. They growled at Tony, as he walked them to their dog pen, and they had nothing at all to say to me. I was okay about it, because I knew that in time, they would come around. I just didn't realize how much time it would take.

Slowly, but surely, their tails started wagging when Tony, John, Ben or I came around, but they still were shy. It took two weeks, before we took Bobbie and Willie to the vet, to get their shots, and to be spayed and neutered, because we wanted them to gain our trust, and because they wouldn't let us put a leash on them.

Month by month, they improved their people skills. On November 3, 2008—a nice man came out and adopted Bobbie! She now lives on a fancy ranch, between here and Kerrville, and she is doing great and their caregivers love her! Willie was okay with her leaving, but still didn't trust most people—especially men.

Okay, now here is a 'fifties moment,' back in November, December or January, Ellen and June came out with their friend Jim—to walk our dogs! When Jim came out, for his very first time—he was determined to leash Willie, and take him for a walk. Well, that took a while. Thank goodness that Jim is a patient man!

After that, Jim started coming out every week to walk our dogs, and he would always spend extra time with Willie—trying to win over his trust—and it finally worked! One day, with Aaron's help—they got a leash on Willie! Jim took him for a long walk and the rest is history! Thank you so much, Jim!

Since that breakthrough day—Willie could not wait to go for a walk, whether it was with Jim, Aaron, Linda T. or somebody else! Willie loved to go for walks, including a swim, and he would start barking with excitement, if he thought he was going for a walk!

When I went outside to meet the Nugents, and to get them to fill out Willie's adoption papers—I was really impressed with them—they loved dogs, and I loved them! After the paperwork was filled out, Aaron helped load Willie into a crate, as Tony, Linda and I watched, along with David's family.

Willie seemed a little nervous about leaving the rescue ranch, but that is normal. I am pretty sure that his adoption is going to stick, and he is going to have one great life ahead of him. I love you— Willie Nelson—today was your day!

Y'all have a great evening! I'm fixin' to watch the Barbra Streisand special that I recorded earlier! 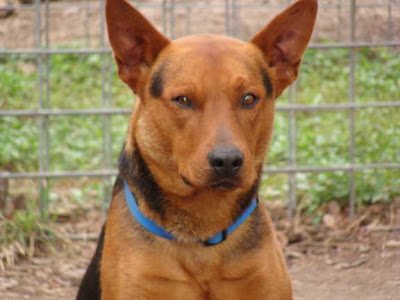 Look at that ginger haird dog! What a perfect name for him.
I saw Willie Nelson perform in Toronto with Ray Price and Billy Bob Thornton with his band The Boxmasters 2 weeks ago. Loved seeing and hearing Bobbie on the keyboards with the rest of the band. What a fantastic show!

Good luck to Willie in his new home ; ))

Well look at that: I spelled "haired" the way Loretta Lynn sings it. Dang. LOL!!

Laugh out loud—Fay! Hair's some advice—don't worry about it. I like your Loretta Lynn impersonation!