Today was a great day, again! This morning I did The Harley Show, at 7:45! Baxter Black was Harley's Pet of the Week. We had a fun time talking about Mr. Ziffle going to the Trails End Guest House, and Hannah Montana finding her forever home!

This afternoon, Jim Boyd, from Boyd's Appliance, in Sabinal, Texas—delivered our new Speed Queen washer and dryer—Queen Bee and Airy Queen! I don't know who was happier, Tone or me, because our dirty clothes were piled up, to our eight foot ceiling, in the trailer!

While the men were outside, I said goodbye to Mr. and Miss Tubby, and then thanked them for all of their hard work. Then they left the trailer speechless!

OMG! As soon as they were gone, Tony and I were shocked at the mess they had left behind—we're talkin' true trailer trash! There were piles of old dog hair, which included an unused hairy paint brush, a furry blue fly swatter, several coins, a couple of drill bits and a few hair-covered socks! I was so embarrassed! "Nance!" Tony said, with excitement. "Here's my fly swatter!" I sighed. Then T. began sweeping as I vacuumed up—our seven year collection of 'never could find' relics and dust bunnies.

Jim Boyd, and his co-worker, brought in Queen Bee and hooked her up! It was love at first sight—she was beautiful! Next came Airy Queen! He was beautiful, too! Then after signing some paperwork, and writing a check, Jim and his buddy left the rescue ranch, and then we did, too.

Tone and I went to Kerrville, to run some errands. We first stopped off, for a short visit with Sandy and Jon Wolfmueller and then we ran our errands, then Buttermilk returned us safely to the rescue ranch.

As soon as we were home, I started a load of clothes in Queen Bee. When she had completed her job, I let Tony, be the first to load Airy! After figuring out his settings—T. pushed the right buttons, and Airy did his thing!

We love our Speed Queens! Long Live The Queens! Y'all have a great evening! I've got some clothes to fold. 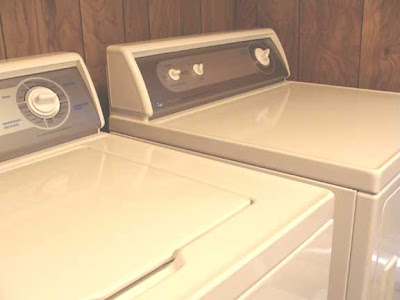