Talk about bad timing, it actually started on Sunday. Sundays are Tony's and my official day off, and usually we go to Kerrville to get groceries at H.E.B. and run a few errands. After Tony and I had run a couple of errands, we went to H.E.B. to buy some much needed groceries, but it was closed, so we returned to the rescue ranch.

Yesterday, after walking five miles, catching up on some paperwork, and returning several phone calls, Tony and I took off for Kerrville, again. We took Trigger, because Buttermilk was low on gas.

I needed to get some new guitar strings, so we took Baby, my guitar, so we could drop it off, at the Melody Corner store, so Stan could restring it for me, while we ran some errands. When Tony put Baby in the back of Trigger—his shoulder went out and he was hurting. Before arriving in Kerrville—we had made us a plan.

First, we would stop by Wolfmueller's Books, to see Jon and Sandy, and for me to purchase a copy of my book, so I could give it to Freda, at La Four's restaurant. I had promised to bring her a book, but I seemed to always forget. When we arrived at Wolfmueller's, Tony painfully took Baby from the back of the truck, and locked her inside Trigger.

Jon was in his office, having a conversation with a man, so we just waved to him—he was busy. Then we go and get a copy of my book off of the shelf, and go to the checkout counter to pay for it. Mary Jo was there and she greeted us. "Where's Sandy?" I asked.

"She's gone, but she will be back in a little while." We were disappointed. After paying for my book, I opened it up, and inscribed it to Freda. Then we left. And, Tony once again, put Baby in the back of the truck, then we headed to 'Stan the Man's' music store. When we arrived—the sign on the door said, 'Sorry, We're Closed.' I was disappointed, but Tony wasn't. I think he was glad that he didn't have to get Baby out of the back.

We were hungry, so we headed to La Four's Seafood Restaurant, I was excited about finally giving Freda my book! When we arrived at La Four's—it was closed, too! Tony and I were definitely on a roll, and we were not smiling! "Tony, there's another music store on Water Street. Let's go there!"

When we pulled up and parked at 'Bandera Strings,' Tony grabbed Baby and we went inside the store. "Do y'all carry guitar strings?" I asked.

"No. We just repair guitars. Sorry" A pleasant woman said. As we walked back to Trigger, I could tell that Tony was starting to get really agitated with Baby, and he groaned when he lifted her up and returned her to her resting place.

Trying to smooth things over, I suggested we eat at The Save Inn. Tony liked my idea, until he had to lock her inside Trigger, again! As always, our lunch was delicious, and the friendly waitress seemed to cheer Tony up some—thank goodness!

As we walked back to Trigger, I said, "Tony let's go to Home Depot. I want to build a coffee table like Carol's. It's just two blocks down."

When we parked, Tony said a few cuss words, as he shoved Baby back into the cab! After locking the doors, we went inside Home Depot. Twenty minutes later, we walked out of the store with fifty dollars of lumber. "Tony, let me load the truck, I know your shoulder is killing you." Tony helped me load the truck, and grumbled something, when he returned Baby back to her place. Then Trigger took us to H.E.B.

After Tony threw Baby into the cab, we went inside to shop. Twenty minutes later, we were back in the parking lot, loading the back with groceries. "Cheer up, T.," I said. "You only have to move Baby two more times!" My words fell on deaf ears. Tony was starting to hate Baby!

When we arrived at the rescue ranch, Tony carried Baby inside, as I carried a bag of groceries. After the groceries were put up—we unloaded the sticks of lumber, and then set up shop on the front porch! Tony's shoulder was really hurting him, so I only asked him to help me nail the base boards together—then he went inside and I went to work! Two hours into my outdoor project—Kinky called! He wanted to come over and have a picnic with Toto and our gang, and he wanted to see my coffee table project!

Kinky was impressed with my building skills, even though I was actually building a big box—to put our feet on. After the picnic, Kink hung around for a little while, as we discussed his plans to plant bamboo.

At seven-fifteen, I had finished my coffee table! Unfortunately, it doesn't look like Carol's at all, but I love it! In fact, I am proud of it! Here are a few pictures! Y'all have a great Tuesday!

P.S. Later today, we're taking Baby back to Kerrville to get new strings! 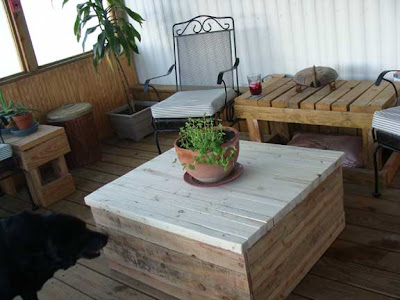 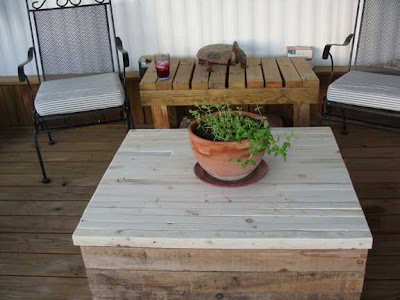 I love the coffee table! You are so talented!

Good morning, Carol! Thank you so much for your comment! I am so glad that you like it! I wanted it to look like yours, but it doesn't. I am thrilled with it and Tony really likes it, too!

If you have any extra time today, I would love for you to come over and prop your feet up on it!

P.S. Tone says hi to you and John!

Nancy, your table looks fabulous, well done! Sorry about Tony's shoulder going out on him. Hope it's better today.
For the past week I've been studying for my exam, which is tonight so I've missed your blog the last several days.
I'll be back tomorrow to catch up!