Today has been great! By nine-thirty this morning, I was done with my chores and five miles! Around ten o'clock, June came out to brush our dogs, and to hand out treats! Our dogs love her and so do we!

About twenty minutes later, a car drove up to the trailer. I went outside to see who it was, figuring that it was probably Curt and Sue Swafford, who live in Terlinga. They are involved with burro rescue in the Big Bend area, and I was anxious to actually meet them in person! They had called me last week, to make an appointment to come visit the rescue ranch—this morning. "Hi, I'm Nancy. Welcome to the rescue ranch!"

"Hi Cousin Nancy. I'm Marsh and this is my wife, Dottie." We shook hands. "We are big Kinky fans and we love animals—especially dogs," Marsh said. "And, we wanted to come out and see the rescue ranch. We're from Key West and retired. We're on our way back to our other home in Michigan..."

"That's great! Let me give y'all a tour!" I said. By the time they had met all of our dogs, and fallen in love with David Beckham, our adorable little wild hog, who is a great soccer playing pig—I decided to give them the Grand Tour. I really liked Dottie and Marsh, so I took them into the Space Ship and then into Outer Space, where we had a really fun visit!

"Yes, he lives here. In fact, he is here right now, but not right now, because he is in Kerrville running some errands." I then came inside the trailer and grabbed the phone, and then went back into Outer Space. "I want Kinky to meet y'all. I'm going to call him." I called the Lodge and got his answering machine. Then I called his cell phone. "Kinky."

"I'm at H.E.B.—why?" I then told him about Marsh and Dottie being here. "I'm heading back to the ranch, as soon as I finish shopping. I would love to meet them."

When I hung up, I told Dottie and Marsh, that Kinky wanted to meet them and that he should be back at the ranch in about forty minutes or so. I invited them to hang out with me in Outer Space until he arrived. They seemed thrilled! While we were killing time, we talked about my book, and they wanted to buy a copy, so I told them to go to Wolfmuellers. "Do you have their address?" Dottie asked. "We can put it in our GPS and it will take us there."

Off hand, I didn't know their address, so I called Wolfmueller's. "Hi Jon!"

"I need y'all's address, so Marsh and Dottie can put it into their GPS, so they can find your place, after they leave here. They want to buy a copy of my book. They're from Key West headed back to Michigan." Then I laughed, and jokingly said, "I think they must have a really cheap GPS, because it took them to Texas!" Jon, Marsh and Dottie laughed. Actually, I knew that they were headed out to Arizona, so they could visit their son, Matt.

While I gave them a tour of the trailer, another car had pulled up to the trailer. When we came outside, Tony was giving Curt, Sue, Alex and Blake a tour. A few minutes later, Kinky called—he was back. Dottie, Marsh and I grabbed our cameras and went up to the barn, so I could take them over to the Lodge in Kermit. When we reached the barn, we met up with Tony's group. After introductions and handshakes I said, "Hey, let's all go over to the Lodge to see Kinky!"

Five minutes later, we were outside visiting with Kinky. The conversations were fun and everyone seemed to be enjoying themselves. When it was time to leave, everyone pulled out their cameras and shot each other! Here is a picture that I took. From left to right: Kinky, Blake, Curt, Alex, Sue, Marsh, Dottie and Tone. 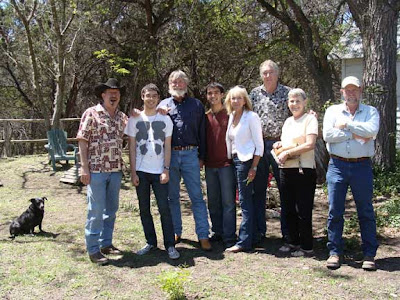 And, here is picture of the t-shirt that Curt and Sue gave to me. I love it, and plan to wear it tomorrow! 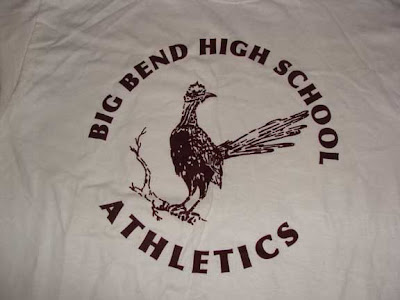 When we returned to the rescue ranch, Marsh and Dottie left first. I invited everyone to go into Outer Space and we had a really fun visit! After they left, I told Tony, "I really enjoyed meeting all of those nice people today! I'm adding them to our Real Friends List!"

Around two o'clock, Buttermilk, Tony and I took off for Kerrville, to grab some groceries. About seven miles down the road, just as we were starting to go down the pass—Tony slammed on the brakes! A truck was stopped, with the truck driver standing next to a man and a woman motorcyclist—who had just run their motorcycle off of the road! The man was bleeding and in shock. Tony pulled off of the road to see if they were okay. The man's head was all skinned up and he was bleeding pretty badly, but the woman seemed to be okay—thank goodness. We offered to take them to the hospital, but the man didn't want to leave his Harley. Tony then offered to call 911, to get an ambulance for them, as soon as we reached cell service. The man told us that he was sure he had broken some ribs, and maybe his shoulder and he thanked us.

We took off! About four miles later, I dialed 911, for the very first time in my life! After giving the dispatcher all of the needed information—we saw a Sheriff's car, across the road, at a stop sign, fixin' to pull out onto Highway 16, ready to head back to Kerrville! Tony honked his horn, pulled off of the road and we waved wildly at them! Thank goodness they saw us! After everyone's windows were rolled down, Tony hollered to the deputies about the accident, and told them that we had just called 911 asking for an ambulance! The officers thanked us, and then turned right instead of left, with their lights flashing! Before we made it to the city limits, an ambulance passed us going south!

After Tone and I had run our two errands, we headed back to the rescue ranch. When we were just outside of Kerrville, a wrecker passed us, with the man's motorcycle strapped down. I sure hope that man is okay.

When we returned home, I checked our answering machine. We had one new call, and we don't know who it was. The man had seen us on 16 talking to the deputies and was concerned. I have posted it on the sidebar, under favorite videos and i hope you will check it out—maybe you know who made the call. Oh, and get this—for some reason his phone number did not show up at all on our Caller I.D.!

Early this evening, I gave Mama a bath! And, then she gave Tony and me a bath, after we had washed her off! Here is a picture of Mama and me. Y'all have a great evening! 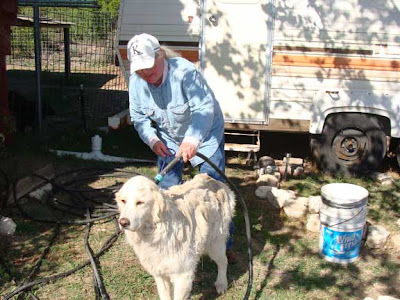 Wow, what a day you had! Lots of excitement, both good and bad. I hope that couple is ok too. He sounds all right, given that he knew he didn't want to leave his Harley ; ))

My goodness Nancy, you're disappearing! Good job on teh walking DVDs. Mama looks so sweet, as usual. Looks like she didn't mind her bath at all.