I Love The Geezinslaw Brothers!

Today has been great! After walking five miles, I went to my office, to finish the feng shui. I spent over two hours boxing up more stuff and labeling it. The fun part was when I finally found some more of my stuff! We're talking more old photos, forgotten artwork and some old Geezinslaw Brother's satin jackets and sweatshirts—that my late husband, Jim and I, had designed for them!

In the late eighties, when Jim and I started up our embroidery business, PDQ Monogramming Shop, in Westlake, Texas. We heard Sammy one morning on the radio, and he was whining about wishing they had tour jackets for The Geezinslaw Brothers. Business was slow for us, so Jim picked up the phone and called him live on the air, "Sammy, Nancy and I will be at the Broken Spoke this coming Saturday night, when y'all perform, with two Geezinslaw Brother's tour jackets for you and Son." Then Jim and I quickly went to work designing their tour jackets.

Saturday night, Jim and I went to the Broken Spoke, Austin's favorite honky tonk—to deliver their tour jackets. "Here's the jackets that we promised you," Jim said to Sammy and Son. They loved them and were beside themselves! Sammy asked Jim about us and our embroidery shop. They visited for a few minutes, then Jim handed him one of our business cards, and then we left, because we needed to get home.

Monday morning, while Jim and I were busy sewing at our shop, while listening to Sammy entertain us on KVET—we had the biggest surprise! Sammy said something like this, "Folks, Cousin Nancy and Cousin Jimmy, over at PDQ Monogramming Shop, in Westlake, made Son and me two of the finest Geezinslaw Brother's tour jackets! They are absolutely beautiful! Those two know their embroidery, and if you need any embroidery—they are the best in Austin!" Jim and I were totally speechless! We never expected Sammy to plug us.

Yes, it was Sammy who gave me my moniker, Cousin Nancy—over twenty-one years ago. Sammy also made our shop famous in Austin, by giving us free plugs three to four times a week—for free. Soon we had more customers than we knew what to do with, and he was the man who first introduced us to Kinky!

After a couple of years, Sammy, who had become a dear friend of ours, would often drop by our shop to visit. He had told us about Kinky writing some great books—three to be exact, and he recommended that we read them. A few months later, Sammy showed up at our shop with Kinky! Kinky was wearing his cowboy hat and smoking a cigar.

After introductions, we visited and laughed a lot. Before leaving the shop, Kinky said to me, "I want to order two of your Shiny Nineties Geezinslaw Brother's jackets for my sister and me. How much will they cost me, Cousin Nancy?"

Being somewhat star struck, at the time, I said, "We'll make you two jackets for three signed, first editions of your books. How does that sound?"

Kinky smiled, "That sounds good to me." We shook hands on it. Then Kink gave me his address at the ranch. A few days later, we mailed off the two black satin—Shiny Nineties jackets, which were sewn with neon thread—that lit up like a neon sign when near a black light. One week later, we received his three first edition books—inscribed to Cousin Nancy and Cousin Jimmy! And the rest is history! Thank you, Sammy—I love you! 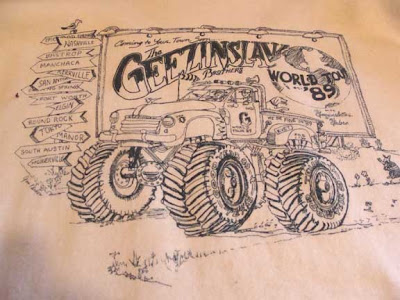 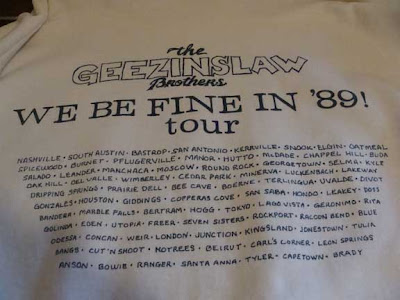 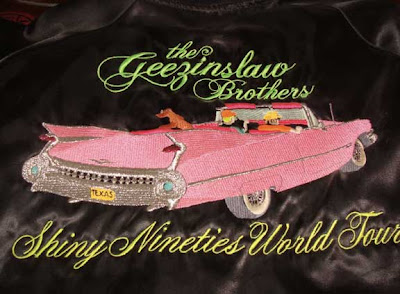 The Geezinslaw Bros items are great! I especially love the black shiny nineties jacket..the pink Cadillac and the dog are wonderful! See you this weekend.

Happy trails to you!