Last month, I sent Pat S., our incredibly talented woman, who is our web master, for Utopia's website—Kahlua's picture to post, because I had forgotten to post it, when Kahlua was returned to us. A few days later, Pat sends me an e-mail, asking me more about Kahlua. I shot her off an e-mail, telling her all about K. A few days after that, Pat sends me an e-mail, telling me that she is considering adopting Kahlua, but it would take several weeks, before she could come out here to meet her! Last week, Pat sent me another e, telling me that she would be out here on Saturday to possibly adopt Kahlua!

Yesterday morning, after doing my five miles with Leslie (I'm now totally addicted to her walking DVD's! They are the best!) I decided to go ahead, and take care of Kahlua's adoption paperwork—hoping that Pat would fall in love with her and adopt her. I had my fingers crossed.

Pat arrived around noon, with her newly wed husband, Bill! I went out to greet them. After hugs and handshakes, I said, "Pat, I love your truck—it's awesome!"

"Thanks. It's his truck, not mine. Let's go meet Kahlua!" Pat and I walked, as Tony and Bill, followed us in Kermit, because Bill had had some recent surgery. When we arrived at her pen—it was love at first sight, for the two of them! "Can I take her for a walk?" Pat asked. Aaron quickly put a leash on K-Girl, then Pat, Kahlua and I left the rescue ranch.

Bill asked about a couple of our dogs, but they had already been adopted, and were waiting to be picked up. "Bill, Pat," I said. "Y'all have got to meet Nash, aka Ghost Dog—he is one fantastic dog, and he is a smiler! I love this dog! And, I promise you, that he is one super cool dog!" We then went to G.D.'s pen.

When we walked up to his pen, I said, "Nash, would you like to get adopted today?" Nash started grinning—ear to ear, with his tail wagging faster than fast! Pat and Bill liked him, and Pat wanted to take Kahlua and him, for a walk—her wish was our command! In less than two minutes, Pat and Tony were leaving the rescue ranch with two very happy dogs, while I was silently saying little prayers—that it would work, hoping that Ghost Dog would finally find his forever home, too.

When they returned, Pat said, "Nash is a great dog—we'll take him, too." I almost started to cry—I was so happy for him and Kahlua. Carol and Brenda then drive into the rescue ranch, to walk our dogs. "Y'all, Carol loves Nash, he is her favorite dog, and she always walks him first. I'll be right back, I've got to tell her the great news!"

I then took off to greet Brenda and Carol. "Carol, Ghost Dog is getting adopted..." Carol was so happy for him! We then went to his pen, so I could introduce them to Pat and Bill. Nash was grinning, and when Carol bent down to hug him—he licked her on the face. It was like best friends saying goodbye to one another for the last time. Brenda and Carol then took off to walk our dogs.

"Before y'all leave, I want to show you the Space Ship and take y'all into Outer Space!"

"What? Space ship? Outer Space?" Bill asked. Pat, who follows my blog, quickly explained to him about my space deals. While Tony returned the dogs to their pens for the last time—we went into the Space Ship, and then went into Outer Space! They loved it, and were blown away with how cool they were! Then I invited them into the trailer, for a tour, and they both seemed pretty impressed with it—especially the cedar bed that Tony had made for us, when we got married. It is so awesome! After that, Pat filled out the adoption forms.

Just before we were fixin' to leave the trailer, to go get the dogs, Bill said, "My name is not Bill—it's Harold." Then he laughed!

"Harold?" I said. "I'm so sorry, I thought your name was Bill. I'm not good with names. I thought Pat had said Bill."

"I was talking to you about Bill, Bill Clinton, the dog I adopted from y'all, years ago, and that must have confused you." We all started laughing!

I took six pictures of them loading up Kahlua and Nash, but unfortunatley, they didn't turn out good. After they drove away with two of my favorite dogs, I teared up. Here is a picture of Nash, followed by Kahlua's. Two of the luckiest dogs on the planet! Pat walks five to seven miles every day—and they are fixin' to, too! 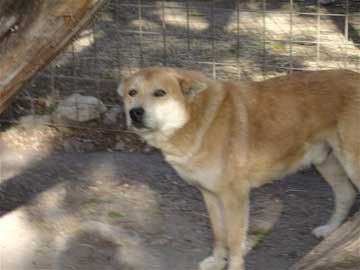 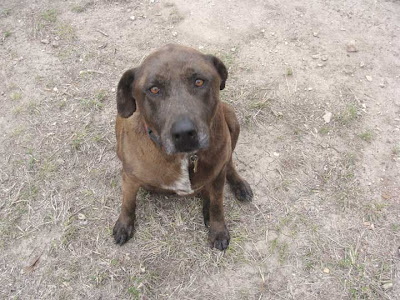 Tony and I had a great time over at Carol's last night! When we arrived, Jon and Sandy were already there, but unfortunately, Brenda wasn't—she had to get back to San Antone! Carol's dinner was totally delicious and healthy—and I ate way too much and you would have, too!

After dinner, we laughed so much—I am sure that I burned off those extra calories. And, I am sure that John did, too—because when I told them my rooster joke! He laughed his head off!

This evening, Tony planted my six new Blue Plumbagos for me, by the writing cabin, and then we worked in the garden. Y'all have a great evening!

P.S. This morning Tony received an e-mail from Pat—the dogs are working out great!
Posted by cousin nancy at 7:07 PM