You NoMads Truly Know How To Rock—Country Style!

Saturday evening, Tone and I arrived at the Dietert Center, just before seven o'clock, for the Riders In The Sky concert! Mari was there to greet us, and to introduce us to some fellow NoMads! We enjoyed meeting all of them, and then Harley and Becky Belew arrived with their son, Mica—all dressed up in cowboy attire, including some really cool chaps! Then Sandy and Jon Wolfmueller arrived and we had us a fun visit with everyone!

Becky and Mica left first, to go find their seats, because Harley was going to be the M.C. for the evening. Lori, another very famous NoMad (of The Cowboy Steak House, too) showed up to check out my pink Justin Gypsy boots, along with several other great NoMads! And, I proudly showed them off! Then David, Mari's husband, arrived and Tony and I were very excited to finally get to meet him! (Don't tell Mari that I said this, even though I am sure that she already knows this—but David is one very good looking cowboy! They are truly a perfect match for each other!)

Ten minutes before the show started, another nice NoMad lady, took Tony and I to our reserved seats—row five, seats fourteen and fifteen—compliments of The NoMads! At seven-thirty, the lights dimmed and Lori walked out onto the stage, looking beautiful. She talked about The NoMads, and then made the audience laugh with some very funny remarks! Then she introduced Harley!

When Harley, Kerrville's favorite DJ, walked out onto the stage, there was a huge applause—it was magic! He was, as always, hilarious, and when he introduced the Riders In The Sky! The applause was deafening, even for me, who is already semi-deaf!

OMG! These four men were incredibly great! They sung one great song after another, along with making several hilarious remarks, that cracked the audience up—what I call true showmen! Every time that I looked over at T. he was either grinning, or laughing out loud, at everyone of their funny wisecracks! The Riders In the Sky had one polished act—we're talking one totally fined tuned show, and everyone in that sold out crowd knew it!

When the Riders sang their last song, they received one very loud, clapping, standing ovation! It gave me goose bumps! Harley then quickly came out on stage, and asked The Riders In The Sky to please come back out, and do one more song for everyone and they did!

But before they sang their last song, with the crowd roaring with applause, Lori and Mari somehow quickly went backstage and rigged up a real Texas tumble weed, that they would control backstage, if The Riders chose to sing Tumbling Tumbleweed.

When TRITS began singing, 'Tumbling Tumbleweed' their rigged tumbleweed began moving back and forth behind the men, as they sang that beautiful song! It was pretty hilarious, so near the end of their song, I asked Tone to please film it for me and he did, because the man in front of me had a huge bald head. You can watch Lori and Mari's traveling tumbleweed, a twenty-second video clip—on the sidebar under Cousin Nancy's favorite videos—thanks to Tony!

After the show ended, Tone and I visited with Mari and Lori, and our friends, Les and Denise. After the crowd had wittled down, T. and I went to the lobby to get autographs from these fine, four talented showmen! But, before we did, Tony bought me two of their CD's, a beautiful poster of TRITS and a t-shirt for more Valentine's presents!

I want to sincerely thank Mari, Lori and the fabulous NoMads for making my Valentines Day the greatest! I love all of y'all and can never thank you enough, for such a fun filled evening! You NoMads Truly Rock!

Here are some pictures that we took at the concert! When Tony shot the picture of me next to Ranger Doug, I said, "Kinky said for me to please tell you hello. Kinky, Tony and I started the Utopia Animal Rescue Ranch ten years ago, and he sends you his best." 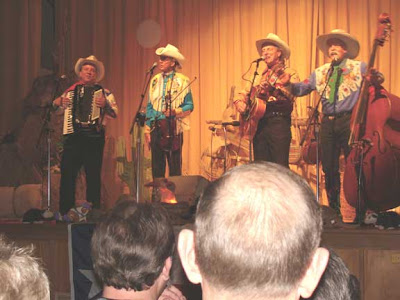 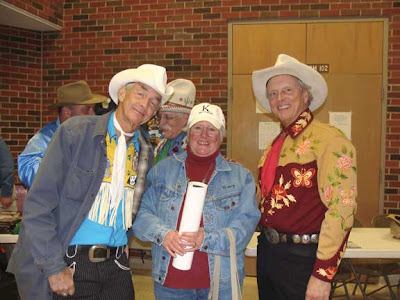 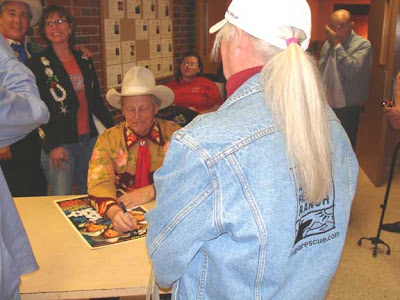 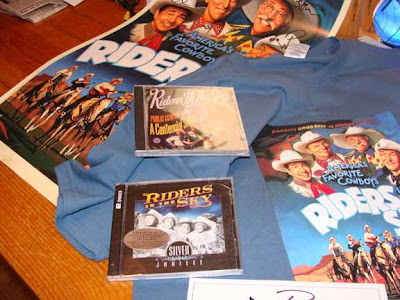 "I know Kinky," Ranger Doug said. "Please tell him that I said hello, and that I read his books, and hope that he will run for Governor of Texas, again!"

Hey Nance,
That was a great video clip, the tumbleweed was so cute!
That brief clip of Riders in the Sky sounded great. That must have been some great live music for sure.