The War Of The iPods!

Our trip officially started at 6:30, when we picked up Carol at her ranch. When Silver pulled up to her house, I said to Tony, “I sure hope she doesn’t pack like us—there’s hardly any more room left in the back. I hope that we don’t have to rent a trailer!”

Tony agreed with me, and then we were really relieved when Carol came out of her house— with two very small bags! Tony got out of the SUV to open up the hatch, so Carol could stowaway her tiny ‘Must Have Collection,’ in the back with our pile of ‘Never Leave Home Without It Necessities!’

When Carol jumped inside the backseat, she was already laughing, because her two great, giant dogs, wanted to go with her, and they had tried to jump into the back, but couldn’t because it was too full—with Tone’s and my gigantic stack of NLHWIN! Carol’s laughter set the mood for our Tuesday-Wednesday Vacation!

During our four and a half hour drive, the three of us talked a lot, but we laughed more, as Garmina, Tony’s new Garmin GPS—that I had named—kept interrupting us! “Tone,” I said.” Garmina is more of a backseat driver than me! I love...”

Then Garmina interrupted me, and said, “In point five miles turn left.”

When we reached the ferry, to hop over, to our first island—Port Aransas, we laughed in amazement, as Garmina showed us on the ferry— floating in the water, and remarked, “In point two miles exit ferry.” Tony obeyed her—I was jealous!

When we reached the boathouse, Rick and John were there to greet us, in a matter of minutes! After introductions, hugs and handshakes Tony and I held our breaths as he opened up the rear hatch with our NLHWIN! Rick was great about it, he pulled out his cell phone and said, “Let me call a barge to bring your stuff over to the island.” We all laughed! And with the help of John and Rick, the Boston Whaler was loaded in ten minutes or less! Then the four of us took off for our next island!

Once we were out of the harbor, Rick cranked the excelarator— and we took off like a rocket—flying through the waves! Carol, John and I sat on the backseat, and laughed the whole way to the island with the Lighthouse!

Leisa, Rick’s better three-quarters, met us at the dock to greet us! After introductions and hugs, Rick took off to get a giant cart, so we could load Carol’s small collection and T.’s and my titanic necessities!

The party began after Rick had called Kinky, and I had talked to Kink, after we had unloaded our stuff! Tony and John wanted to fish, so we all gathered down on the dock, and visited while the fish escaped being caught! After an hour of ‘no-bites,’ Rick wanted to show us the Ark, where he is a volunteer, that rescues injured seaturtles, dolphins, birds etc.! Here is a picture of T.'s fish, Rick and Carol and John and Leisa, with Leisa's new rescued dog—Squirt! 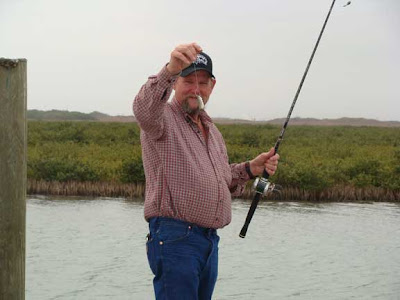 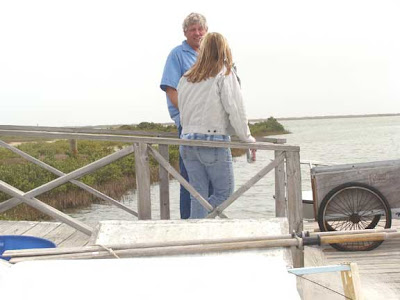 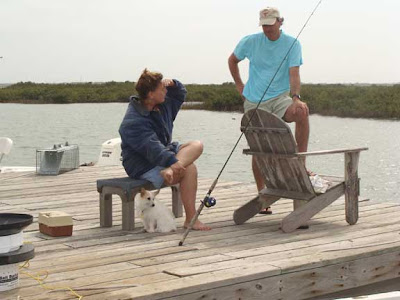 The Ark was really impressive! Rick gave us the Grand Tour, and we saw all kinds of turtles and birds in recovery—soon to be released back into the ocean or the air. After that, we walked over to The Flats, a favorite local bar, and drank a beer. Then we went back to the boat and boarded up. Here is a picture of a boat that’s name made me laugh out loud! 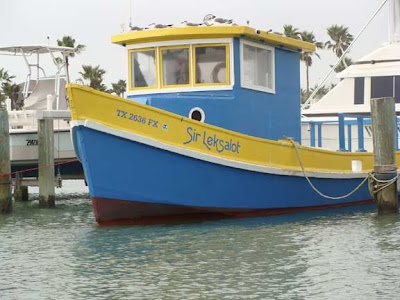 Once again, we slowly went through the harbor, and then Rick cranked the Boston Whaler and we laughed our heads off, as John and I held our caps in hand, and Tone held on tight to his cap and rail. I made a video clip of it, and it is posted on the sidebar ‘Cousin Nancy’s Favorite Videos.’

When we returned to the island, I grabbed our portable iDock, my iPods and the music began to flow, as Leisa and Rick prepared dinner for us! And, that’s when ‘The Battle of the iPods’ commenced!

After playing some Dylan, Dwight and The Grateful Dawg songs, T. decided that it was his turn, while I was in the kitchen visiting with Leisa! Suddenly, Hank Williams is singing—what? Tony then began playing his music—one song after another! It was good, but not as good as mine was!

So, when he went to the restroom, I switched iPods and began playing my music again, which made me happy! When Tony returned to the living room—he was wearing a frown on his face. No fish, and now no music from his iPod. To avoid a disaster, after playing a few more songs, I put T.’s iPod back on the dock. And, that is when Rick, Captain Rick—took off to go pick up Kelly and Pete and bring them back to the island! There is a video clip, I took of them arriving on the island, with Pete’s dog, Thelma, on the sidebar.

We had a great time visiting with Kelly and Pete, but they couldn’t stay for dinner, because Pete had to get back to Port A—so he could rehearse with the band that he is in—Alias Hart & Jones. Unfortunately, Captain Rick had to return them to Port A—too soon!

Leisa and Captain Rick served us up one fine dinner! We’re talking delicious baked Tofu, which was to die for, Tuna steaks and the best rice pilaf that I have ever eaten! Leisa gave me the recipe for her baked Tofu, and I cannot wait to make some—I loved it and sorta pigged out on it!

After dinner and a few drinks—Rick serenaded us with his mandolin, which we all enjoyed, and then he persuaded me to play guitar—big mistake on his part! I didn’t play very well, like I always do, but it was fun! 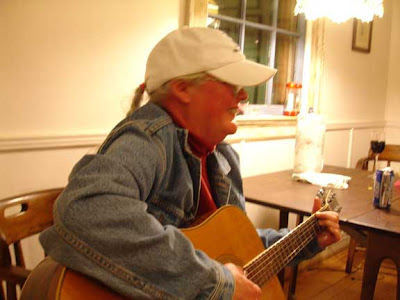 Y’all have a great evening!

To Be Continued...(Because Rick just called me and he is going to bed real soon.)
Posted by cousin nancy at 8:39 PM