A Quarter Till Five!

Here is a picture of us Tuesday evening, visiting with each other out on the porch, which I have fondly named ‘The Port A. Posse!’ 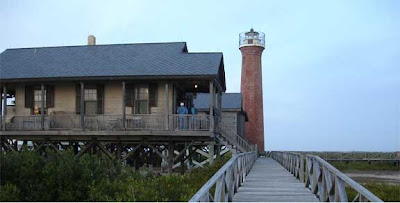 Around ten o’clock Tuesday night, we were all pretty tired, and decided to call it a night, and we went our separate ways—to bed. 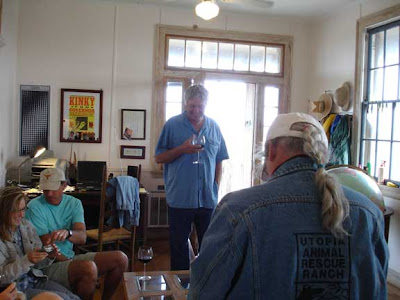 Wednesday morning, I woke up, before the sun was up—badly missing my dogs and our three-legged cat. I quietly crawled out of bed, went to my purse, found my cell phone, and then turned it on, so I could see what time it was. Just as my cell phone chimed its greeting to me, Tony said, “What are you doing, Nance?”

“I’m trying to find out what time it is? I am wide awake, and really missing our dogs and Lucky. Sorry I woke you up.”

“It’s a quarter till five,” Tony announced. “I miss them, too. I’m wide awake, too. Go ahead and flip on the lights.” I did, while thinking—Garmina can’t do that—Ha! Then I went into the kitchen and started the coffee pot, that Carol had pre-made, the night before, for all of us.

I showered first and got dressed, and then Tony took his turn in the shower and dressed, while it was still dark outside, I downloaded my many pictures and video clips, while sipping Carol’s delicious Costa Rican coffee, at the long dinner table—while listening to my iPod on our iDock.

By eight o’clock, Carol appeared—all smiles and laughing! We visited a while, and then Tony took off to go fish with John down at the dock, while Carol and I visited with Rick and Leisa, as they prepared breakfast for us—which was totally delicious!

After our delicious meal, the guys fished a little while longer, and then they gave up—the fish were simply not biting!

Leisa needed to go to Port A, so she could get ready to go to work, so while Captain Rick was gone island hopping, John and Carol decided to climb up to the top of the Lighthouse! Unfortunately, I didn’t get any good shots of them, when they made it to the top, but when they came down—I did! Carol’s remarks were hilarious—check it out on Cousin Nancy’s Video Clips.

Around eleven o’clock, we reluctantly loaded up our luggage, because we were having so much fun and didn’t want to leave the island, even though we had to! Captain Rick chauffered us over to the Port Aransas island.

After we had unloaded the Boston Whaler, Rick wanted to show us the bar where Leisa works—The Salty Dog, and he offered to take Carol for a spin on his pretty Vespa! John jumped into Silver and we took off for the Salty Dog! 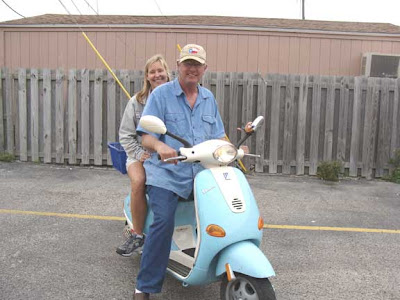 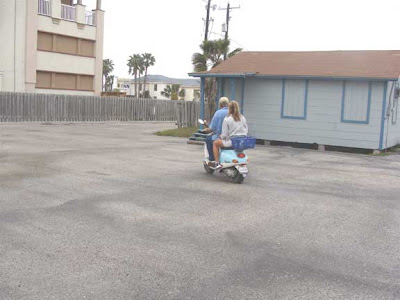 When we arrived at the bar, I said—“Leisa, I love the Salty Dog! I can actually see in here! It is clean and a great bar!” We hung out at the bar and looked around for about ten minutes, and then it was time for the three of us to get on — ‘The Road to Utopia!’

We left Port A around twelve-thirty, and our trip back to Medina was as much fun as it had been going down—even though Garmina kept interrupting us! She may be really smart with directions and all, but she can also be really rude! I loved it—when Tony, at one point—told her to shut up! I loved it—it made my vacation!

Y’all have a great evening! And a special thank you goes to our good friends at Port A.—Rick and Leisa, John, and Pete and Kelly—I love y’all and thank you, so much—for such a great time!

P.S. I can’t wait to tell you about our fun visit today with our good friends, Jim C. and his pretty girlfriend Maureen—from California! Good night and have some sweet dreams!
Posted by cousin nancy at 9:05 PM

I just read about your wonderful mini-break, and loved the pics & videos! What a wonderful place to live, and visit.
It is so wonderful to see a place with NO SNOW! ; )) Makes me want Spring to arrive even sooner.

Thanks for sharing Nancy!

P.S. You're going to have to change your description to Shrinking Nancy! cuz you ain't no shrinking Violet LOL You look great Nance! All your hard work is paying off.

Hello Fay! Thank you for the compliment and the comment—I wish that you could have gone with us!