Boy, Was I Wrong!

This morning, Buttermilk took Tony, Hannah Montana and me to Kerrville, to do The Harley Show live web cast! We arrived at The Rose around 7:35. When we went to go into the building—the door was locked! I tapped gently on the window, and five seconds later, Harley opened the door. After handshakes and hugs Harley said, "Your friend, Rick, the friendly Lighthouse keeper, has already called in this morning about y'all doing the show." Then we stepped into the studio with Harley.

It was a lot of fun, and little Hannah was great, considering she had never done live radio or a live web cast! Near the end of the Utopia segment, I remembered to tell Harley about our two, new rescued Border Collie pups, and five Catahoula pups that a lady has, who is trying to find homes for. My last words were, "Bye Harley—we're heading over to Randy and Lisa's Save Inn for breakfast!" Which was sort of a lie.

We actually stopped off first at Hoegemeyer's Animal Clinic, to drop off precious Hannah, so she could get her nails done—then we went a few blocks down Sidney Baker, and pulled into The Save Inn's parking lot. When we entered the place, it was packed full, as always! "Hi Cousin Nancy and Tony," Lisa said. "A woman named George just called here, and she needs for you to call her." Then she hands me a slip of paper with George's phone number written on it. "Her husband heard you this morning on the radio, and I think they want to adopt one of your Border Collie pups!"

I thanked Lisa, and then Tony and I found one of the last empty tables, and sat down."Tone, I think I had better go outside and call George," I said. "Let's wait until Aaron arrives to order our breakfast. I'll be right back."

I went outside, to the front steps and punched in George's phone number. This was a first for me, because I've never talked to a woman named George—it reminded me of Johnny Cash's hit song, 'A Boy Named Sue.' which I also have on my iPod. "Hello, this is Nancy from the rescue ranch," I said. "Lisa, at The Save Inn just gave me your phone number."

"Oh Cousin Nancy, thank you so much for calling me! I'm Georgieanna. My husband heard you on The Harley Show this morning and we are very interested in adopting one of your Border Collies! When he heard you tell Harley that y'all were headed to The Save Inn—I called hoping to catch you there."

"Well Georgieanna," I said. "You caught me. Let me tell you about the puppies. We just rescued them, the other day and we just had them spayed and neutered, wormed and given all of their shots. We are planning to pick them up, at Hoegemeyers, as soon as we eat breakfast. If y'all want to go by the clinic and check them out, it would be fine with me. We should be over there in about forty minutes or so." Before hanging up, I asked her several important questions, about having a fenced yard, etc. to make sure they were good people. Then I went back inside and sat down with Tony and told him about my conversation with Georgieanna, as we waited for Aaron to arrive.

Tony picked up my cell phone and punched in Hoegemeyer's number. "Hello Susan, this is Tony. Some people might adopt one of our Border pups, and they are coming by to check them out." There was a pause. "Try to talk them into taking both." There was another pause and then Tony laughed out loud! "We'll be over there in about forty minutes. Thanks, bye." Then Tony punched in another set of numbers, "Aaron where are you, man?" There was a brief pause. "It's me Tony." And yes—another pause. "Okay, but hurry—I'm starving." Then Tone returned my phone to me. "He said he is just down the road."

"He's here, I said, as Aaron pulled into the parking lot. As soon as Aaron sat down at our table—Lisa showed up to take our orders, and then she disappeared into the kitchen. As always, our breakfast was delicious and the conversation fun!

When the three of us arrived at Hoegemeyers we went inside and said hello to Susan. We love Susan—she should get the 'Best Receptionist Award in Kerr County,' but unfortunately they don't give out awards like that. A woman who was sitting on their bench next to her beautiful baby then stands up and puts her hand out for me to shake. "Cousin Nancy—I'm Georgieanna." We shook hands. "My husband and I want to adopt the female puppy—Ginger Rogers! What do we need to do?" We talked for several minutes.

Wow! Tony and I were so impressed with Georgieanna, we didn't hesitate for a second, to tell her she could adopt our Ginger! And, she was delighted!

"We live on two acres, the fence is going up this weekend, but we want her to be an inside dog. My husband can't wait to adopt her, and I am going doggie shopping as soon as we leave here. Susan, my husband wants to pick her up after work. Will that be okay?" Susan smiled and nodded yes. "My son is going to be so thrilled!" We talked for a few more minutes, then we left Hoegemeyers with Fred Astaire. Fred rode back to the ranch with Aaron, and Hannah rode back with us. The whole twenty-two miles back to the rescue ranch, Tony and I talked about how happy we were for Ginger finding such a super home! I was on cloud nine about it! Today was going to be great, I thought! But boy, was I wrong!

After returning a few phone calls, Tony walks into the kitchen, wearing a frown. "Nance something is really wrong with my computer. Can you please help me fix it?" An hour later, after being on the phone with an Apple tech, he discovered what the problem was, and told me that Apple would ship us out some software, today, at no cost—to fix Tone's laptop! I love the people at Apple, they are absolutely the best!

My friend Leisa, of Port A. fame, just called and she thinks that she might have found a home for Fred! It's not a done deal, but we've got our fingers crossed! Here is a picture of Fred Astaire, that Tony took! 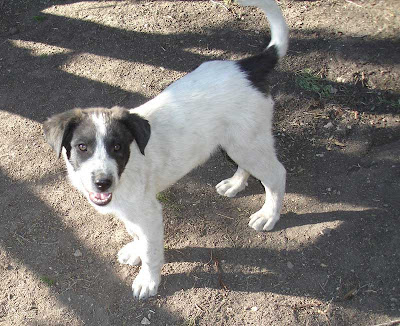 Well, It's time for Mari and me to do another two miles to complete our daily four mile walks. Y'all have a great evening! And please wish me luck tomorrow, because Cindy and I are going horseback riding again—for two hours! Black Jack Cadillac—here I come!
Posted by cousin nancy at 3:54 PM

Nancy - My husband & I are the ones who brought those gorgeous Border Collie pups to you (aka Fred & Ginger). I wept with joy to find that Ginger already has a home and that Fred may soon be going too. What a shame that people dump animals. I feel honored that God put those pups on my dead end road and at my gate so that we could find them, nuture them, feed them and get them to your place so they would find a forever home. God bless all of you for the hard work you do with all those unloved, unwanted yet beautiful animals. Marie

Hi Marie! Thank you for your comment. Tony and I are so happy for Ginger Rogers! If you want to call me, I can tell you more about her wonderful home—she's living better than T. and me! We're talking Uptown!