Friday afternoon, my good friend, from California, Jim C. came out to see us, and he wanted us to meet, Maureen, his lovely girlfriend! I haven't seen Jim since 2002, so after hugs, introductions and handshakes—we went looking for his sign!

I know Jim's birthday is in January, and I think he is a Capricorn or an Aquarius, but it didn't matter Friday, because we were looking for his other sign—the one that was made for him—when he sponsored one of our dog pens, a few years back! "Jim, I just saw it the other day, but can't remember which pen it is hung on, so let's go find it!"

As Maureen, Jim and I went from one pen to another, I introduced our dogs to them. After we had checked out all of the pens on the east side I said, "I am almost positive that it is hanging on a pen on the west side—so we went west.

After introducing them to nearly all of our dogs on the other side, I was puzzled, because I knew I had just seen it the other day. When we reached the barn, where Tony and Aaron were working, I asked them if they had seen Jim's sign, "It says, Jim's Corral, with four dogs leaning on a wood fence, visiting." They shook their heads—no.

I was starting to feel really embarrassed about not finding Jim's sign, so I suggested that we check out the west side, one more time, because as usual, I had been talking too much the first time, and had not been paying enough attention to the signs. Thank goodness they were up for it!

As the three of us retraced our steps, I tried not to talk so much—and that's not easy for me—it's a Libra deal! Anyway, after checking out the west side, for the second time, I was totally frusterated, because Jim's sign wasn't there! "Y'all, if you don't mind hiking a little further, I want to check out the first pen's fence line, on the west side, when you enter the rescue ranch. It has got be there." So we took off to inspect the gate entrance's fence line.

After passing two or three signs—we found it! "Here it is, Jim!" I said with excitement, and using comedian Bill Engvall's words, I said— "Here's your sign!" Jim was delighted to have finally found it! Then the cameras came out.

After taking pictures with Jim and then with Maureen, I offered to give them a tour of the Space Ship, and then take them into Outer Space with Tony and me, so we headed north. When we reached the Space Ship, I entered first, followed by Jim and Maureen. They seemed real impressed with it, and thought it was pretty cool, too! Then we left my spacecraft, and went into Outer Space for a fun visit—with Tony and our four old dogs.

At one point during the conversation, Jim asked about Lucky. "Lucky is thirteen years old. Let's go into the trailer, so y'all can see him." Maureen and Jim followed my lead.

As soon as were inside the trailer, I called out for Lucky. Then I saw him come running out of the hallway—headed straight for Jim—then Lucky sat down next to Jim and licked his hand! "I have never seen Lucky do that with a stranger. Can you believe that Tone? Lucky just kissed a stranger!"

"Cats love Jim," Maureen said, as we watched Jim smiling, and continued to pet our cat. "In fact, all animals love Jim."

"I can believe that, Maureen," I said. "I'm serious—Lucky does not like strangers at all. This is a first!" Some how the conversation went to music, so I cranked up my iPod, and played them some Dylan, Dwight and Grateful Dawg, as we told funny tales about our youth, and the crazy things that we did back then. I was having a blast! And I loved it when Maureen said, "I love the Grateful Dead! I'm still a big fan of theirs, and I went to many of their concerts."

"I'm a Dead Head, too!" I said. Then Kinky called, and invited all of us to come over to the Lodge for a visit.

Kermit, took Jim, Maureen and me over to the Lodge, and Tony followed us in Trigger. We had a great visit with Kink. When it was time for Jim and Maureen to leave, so they could get back to San Antone, Kinky walked us outside to Kermit. 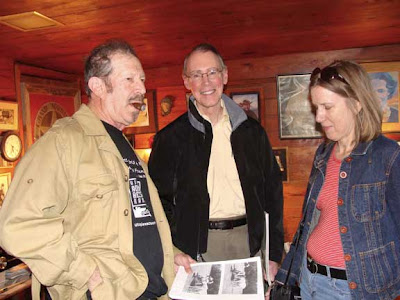 Before we boarded the green machine—Kinky asked us to help him name a couple of pictures for a future project. We stood out in his parking lot for over fifteen minutes, coming up with some hilarious lines for his various pictures! In fact, Jim came up with one—that made us all burst out laughing! Kinky really loved his line, and he was still laughing as we departed!

Kermit then took us over the river and through the woods, and back to the rescue ranch, where we hugged and said our goodbyes to Jim C. and Maureen. Their visit was so much fun! I wish that they lived closer to us and so does Lucky. Y'all have a great evening!
Posted by cousin nancy at 6:01 PM