This morning I over slept! And, to make matters even worse, I woke up with Toto, who was laying right next to my head, on the pillow—growling and barking into my ear, because I had moved! Little old, Toto only has one major flaw and that’s it—growling and barking when anyone moves in the bed! I love Toto, our little, twelve year old wannabe terrorist, I mean terrier poodle mix—that we rescued from the Kerrville pound—over ten years ago.

I grumpily jumped out of bed, looked at the clock—it was nearly seven o’clock! After getting dressed, I quickly fed our six dogs, and the cat. I then made some coffee in the percolator and plugged it into the wall, and while it made hissing and spewing sounds—I went directly to my laptop, on top of the kitchen table, and quickly went to The Harley Show!

Horrors! The Rose 99.9 web site was not broadcasting Harley! The screen read: Off Air, so I made some hissing sounds just like the percolator was! I was now truly upset, because I am so addicted to listening and watching Harley do his Harley Show—live web cast, every morning!

I thought about calling Harley, to tell him about him being off air, but I didn’t want to bother him, so instead, I took my daily baby aspirin, and poured myself a cup of organic coffee—into my favorite, beautiful turtle coffee mug. Then I began preparing the breakfast for Tony, Aaron, Ben and me. Here is my mug shot: 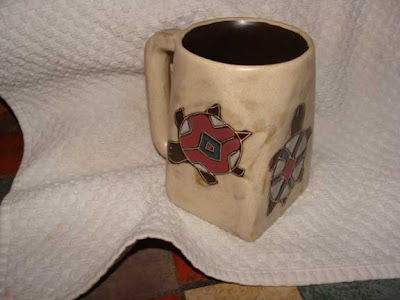 While I chopped, diced and cooked for four, I found myself constantly turning around, to check my laptop, to see if Harley’s show was now airing—and it wasn’t, much to my dismay. At eight o’clock, T. arrived! “Tony, Harley is off air! I am sick about it! Do you want to call him and ask him to turn on his web cam?”

“No. I know he's not web casting,’” Tony replied. “Harley was talking on the radio, about some technical difficulties and not being able to do a live web cast this morning...” I was so relieved to know that it was just a temporary techno problem, and then Tony looked at my laptop screen and said, “Harley’s on, now!” Tony quickly clicked the play button.

Tony, Ben, Aaron and me, ate our breakfast laughing, as we watched and listened to The Harley Show!

After breakfast, I cleaned up the kitchen, while the men worked outside. Then I grabbed my pretty two pound weights and lavender stretchy—band, and did my daily three mile brisk walk with Leslie Sansone!

This afternoon, I did paperwork, returned a few phone calls, and then I helped three sweet donkeys, two jennys and a neutered jack—find new homes! And no, they were not our three resident, mascot donkey’s—Roy, Gabby and our miniature donkey—Little Jewford.

After that, Kinky called and invited me over to the Lodge for a visit. We had a fun visit, then Tony and Ben came over to visit. Kinky challenged Tone to a game of pool—The Medina Bulldog - 1, The Hummingbird Man -0. I loved it!

Kinky and T. decided to shoot another game of pool. The Hummingbird Man - 1, and The Medina Bulldog - lost!

Then I challenged Ben to a game of pool—he reluctantly said he would do it, because they all hate playing pool with me, and they made some pretty funny remarks about my pool playing skills. Final score: Ben The Mountain Man - 1 and as usual, Cousin Nancy lost another game, again. Y’all have a great evening!
Posted by cousin nancy at 7:53 PM