We'll Be Coming Around The Mountain!

Today, our neighbor, our dog walking volunteer and good friend, Carol V., sent me an e-mail about our adventurous trip to Port Aransas, that we’ve been planning—another twenty-four hour get-a-way for Tone and me! We have worked out the details, and unfortunately Ben can’t go with us this time—even though Rick demanded that Ben bring a brick of his and Miles delicious chocolate—Miles of Chocolate.

After a couple of e-mails back and forth to Carol, Ben, Rick, John Kemmerly and Pete and Kelly—Tony and I are taking another vacation to the coast with Carol! And, we can’t wait! We’re talking a Blast—with a capital B!

When I called Rick and told him that Ben wasn’t going to be able to make it down there, he was really disappointed, until I told him that we would bring him and Leisa some of our Miles of Chocolate stash. I don’t know who is more excited about our trip, but I can tell you this, T. has already packed his bags and fishing equipment!

After all of the arrangements were set in stone, Buttermilk, Tony and I went to Kerrville to shop for our trip—Tone bought two new pairs of Wrangler jeans at Gibson’s, while I shopped for groceries over at HEB. He is planning on wearing a new pair to “The Riders In the Sky” concert, this weekend on Valentines Day, and he is taking both pair to Port A.

On our way back home, I said, “Tony, I am going to bring my guitar, so Rick and Pete and I can maybe play some music together, out on the porch by the lighthouse. It has been over a year and a half since I’ve played, and my callouses are completely gone from my fingers, but if I start strummin’ today —maybe my fingers won’t hurt so bad.” Tony liked my idea.

When we arrived back at the rescue ranch, Kinky had called and left two messages on our answering machine. When I called Kinky back, we discussed two things—our vacation to Port Aransas, and The Friedman’s serious low supply of chewgars. “Kinky, ‘Erb has just sent me an e-mail about him sending more ‘Chewgars’ and I promise you that we will only be gone for twenty-four hours or less.”

Here are some pictures of the incredibly great guitar, that my brother, Ronnie, custom built for me, which is signed by Willie Nelson and Billy Joe Shaver! Willie signed my guitar on March 28, 2003, when Kinky took Ben, Tony and me, as his guests, to a Willie concert at The Backyard in Austin, Texas! We spent over an hour on Willie’s bus—talk about fun! And Billy Joe, signed my guitar, two year later, after visiting Tony and me and singing two love songs to us, inside our trailer, several years ago!. He fell in love with Ronnie’s guitar, too! And, the last picture—Tony took of me today—tuning up my guitar. My fingers are killing me! Y’all have a great evening!

P.S. Just a reminder—I’m doing The Harley Show in the morning! I hope that y’all can catch the show at 7:45! And tomorrow Kinky, will be doing an interview with Bob Cole on KVET, 98.8 in Austin at 8:05! (Kinky has asked T. and me to please give him another wake up call—just in case he doesn’t wake up in time.) 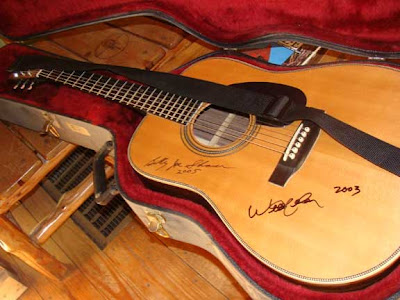 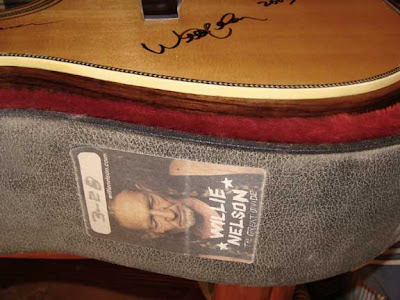 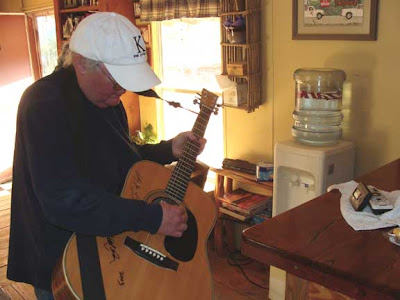