Today has been great. Yesterday afternoon, I was planning on writing a post for my blog, but when I heard and saw the news about that monster tornado ripping through Moore, Oklahoma I was saddened and became depressed.

This morning when Tony woke me up, so I would be awake enough to do the Utopia segment on Big G's Roadshow, I turned on the television and then I immediately turned it off, because I did not want to hear any more bad news, because it upsets me.

Gordon James aka Big G called me a few minutes before it was time to do his popular morning radio show to visit. We talked about our friend Jay Pennington and Kinky. Then we went On-Air.

During the Utopia segment, I told Big G about Lulu being his Pet of the Week, who last Thursday was also Harley's Pet of the Week. "Cousin Nancy, do you know that our friend, Fourth Coates, is going to be on my show later this morning?"

"No, I didn't. Tony and I love Fourth, so please tell him that I said howdy. You know that Fourth was in my first novella and he's in the second one too, if I ever find enough time to finish it. Oh, and you're also in Part II."

"Well, my my, that's some exciting news," Gordon said. "Fourth is going to be on at 9:00 and the first thing that I want to do is to find out which one of us wears the biggest hat..."

When Tony returned from Medina the first thing he said to me was, "Fourth is going to do Big G's show this morning..."

After breakfast, before going outside, Tony and I listened to Big G's interview with Fourth and we really enjoyed it. When Big G told Fourth, "By the way, Cousin Nancy asked me earlier, to tell you howdy," We laughed out loud.

"I love Cousin Nancy and Tony," Fourth replied. Anyway, Big G's show with Fourth was very interesting, informative and often funny, because both of those men have a great sense of humor.

A little before noon, Marcie came over with her friends from Viet Nam, Ian and Hi, who were visiting her. Tony and I immediately liked Ian and his wife, so we invited everyone to come inside The Cabin for a visit.

When we came inside, I picked up my guitar from the bench, so there would be enough seating. "Nancy, you might want to dust off the bench before they sit down," Tony suggested. It didn't look dusty to me, so I didn't.

Ian and Hi went over to the bench and sat down. Then our fun visit started.

Late this afternoon, after I went to Medina to mail a few things, I walked inside our trailer and immediately laughed. Because the sun outside was shining brightly into our trailer and I could see all of the dust left behind on the bench, after Ian and Hi had sat on it. Feeling so embarrassed about it being so dusty, I took this picture of their behindprints that they left behind. 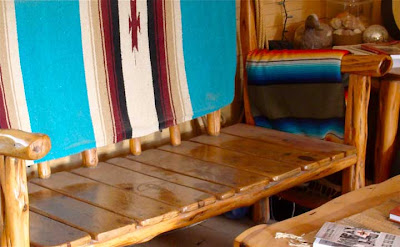 Y'all have a great evening!
Posted by cousin nancy at 5:56 PM