Today has been really great, thank goodness. I confess that I have been very depressed and worried since last Sunday and here's why. Around 3:20 Sunday afternoon, just before the kids at the Medina Children's Home were fixin' to leave—I received a frantic phone call from Betty Rubbles new owners. They told me that Betty had runaway late Saturday night. They were sick about it and they had looked everywhere for her. "A friend told us that they saw a dog that fit her description on Highway 16..."

My heart sank when I heard the news and as soon as our telephone conversation ended, I grabbed my purse and ran outside. "Karon, can I borrow Brandon? I just got a call that Betty has been lost since Saturday night and I want Brandon to go with me to look for her."

"Brandon!" Karon half-hollered. "We need to talk to you. Hurry." Tony and Karon were sick about Betty being lost, but they had to take off, for their monthly 4:00 camera club meeting, at the library in Medina.

As soon as we told Brandon about Betty Rubble running away and being lost, he and I jumped into Trigger and took off to go find Betty.

Brandon and I slowly drove up and down the highway calling for Betty for over an hour, but Betty was a no show, so we gave up. So I took Brandon home and then I came home and printed up a few Betty Rubble Lost posters. 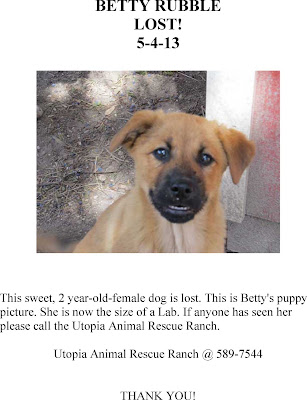 Then I took off for The Old Timer, in Medina. When I walked into the store I explained to the friendly cashier that Betty was lost and asked him if I could put up her poster on their front door. Then he helped me tape the poster on the door and told me he would ask everyone who came in if they had seen her.

Since then, Tony and I have been worried sick about Betty. She was constantly in our thoughts and prayers.

This morning when I woke up my first thoughts were about Betty, wondering if she would be found dead or alive. And I was thankful that it hasn't rained, so it wouldn't wash away Betty's scent to come here or find her way back to her new home.

When we finished our morning chores this morning, I came inside and Carlton was flashing on the breakfast bar. So I pressed Carlton's button, "You have two new messages." The first call was from Kinky, "Nance, call me when you get this message."

The second call, at 10:22, was from the man who adopted Betty, "Hello, Nancy. This is Clovis. I wanted to let you know that Betty showed up at the front gate just a while ago. I don't know where she's been, but we're so glad that she is back. Thank you." I was so thrilled I immediately called the couple back and talked to the man about Betty.

He told me that when they looked out the kitchen window, Betty was outside trying to figure out how to cross the cattle guard to get in. They ran outside and opened the side gate to let her onto their property and Betty was so happy to see them. "She jumped up on us and started kissing us. Even though we had just broke her from the bad habit of jumping up we didn't correct her, because we were so glad to see her. She was in good shape and she wasn't even that hungry. Before he and I adios-ed each other I said, "Clovis, getting Betty back has truly made my day great..."

A few minutes later, Tony walked inside The Cabin and in a sort of depressed-sounding voice I said, "You had better listen to the last message." Tony shrugged and then he pushed Carlton's button to hear some bad news. And when he heard, "Hello, Nancy. This is Clovis..." he smiled and like me he was thrilled beyond words.

Then I told him about talking to Clovis. Then I went over to Kinky's to tell him the good news about Betty.

Late this afternoon when Brandon came over I played the same trick on him as I had played on Tony. Acting sad, I said, "Brandon you need to listen to this message." And like all of us Brandon was grinning ear-to-ear when he heard Clovis' message about Betty. And that is about it for today. I'll tell y'all about the kitten tomorrow.

Y'all have a great day!
Posted by cousin nancy at 7:26 PM