Today has been great so far. This morning while I was cooking breakfast for Tony, Brandon and me, Tony walked inside the trailer and said, "Good morning, Nance."

Tony shrugged his shoulders and said, "I forgot to pick him up. I'll be right back."

Eight minutes later when breakfast was ready, Tony and Brandon walked inside The Cabin, laughing about Tony forgetting to pick him up.

After a fun breakfast with Brandon, Tony and him went outside to do the morning chores, while Hazel and I cleaned the trailer. Around 10:45, Mama ran down the hallway and then let herself go outside, with Belle and Roy barking inside. (All of the Great Pyrenees that I have had or known, for some reason, all know how to open gates and doors.)

I figured that it was Kris and Jim, because they were bringing us a flagpole today, so I went outside to greet them, but it wasn't them—it was our friendly neighbor Andy. After we greeted each other, Andy said, "We just found this little kitten and we wanted to know if y'all could take it, because we can't keep it."

Then Andy showed me the kitten. It was adorable and it looked just like Cactus Jack that we rescued the other day from Kinky. The one that we took to Hoegemeyer Animal Clinic to get adopted. "Andy, we aren't set up for cats, but let me go make a phone call." 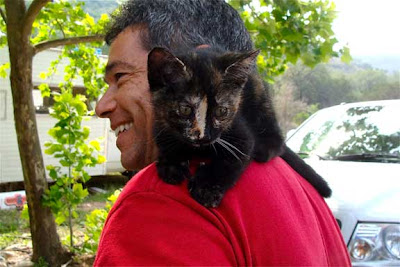 "Hello, Susan. This is Nancy...." When I went back outside I was grinning ear-to-ear. "I have great news. Hoegemeyers can take the kitten, because they have already adopted out Cactus Jack, who must be this one's litter mate..."

While I was telling Andy and his wife to take the kitten to Hoegemeyers, Brandon and Tony walked up and then the kitten jumped out of Andy's arms and took off running. "Don't let it get near the dog pens!" I said, as Andy, Brandon and Tony scrambled to catch the frightened kitten.

One minute later, the kitten ran to hide under Buttermilk, our Ford Expedition. Then the four of us surrounded the vehicle and seconds later Andy caught him, put him in his car, so he could go drop off Cactus Jack Two at Hoegemeyers.

Around noon, Mama ran down the hallway. Then she opened our front door and went back outside again, slamming the door. This time it was Kris and Jim. So, Tony, Brandon and I went outside to greet them.

After howdies and hugs, they showed us the flagpole in the back of Buddy, which is the name of Kris' new pickup. Ten minutes later, while Tony tried over and over again trying to thread the rope through the top of the flagpole, Jim explained  how to put the pole together.

Finally, after Tony successfully threaded the rope, he said, "Let's go put it up." So, Brandon and Tony jumped into Kermit and took off for the ranch's entrance gate. Then Jim jumped into Buddy and took off with Kris and me, riding on Buddy's tailgate, which I think is against the law.

In less than ten minutes, without an Officer showing up to arrest Kris and me for tailgating, Tony and Brandon had put up the flagpole. Then Jim helped them attach the new flag that they also gave to us—Old Glory was waving in the wind. Which startled our donkeys and Maya, because they were grazing inside their corral, near the flagpole.

After the donkeys had followed Maya out of the corral, Jim took this picture of Brandon, me, Tony and Kris standing next to our new flagpole. Thank you, Kris and Jim. And that is about it for tonight. 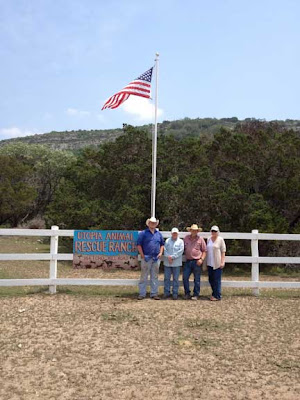 Y'all have a great evening!
Posted by cousin nancy at 5:39 PM