Today has been great. Yesterday morning when  I went over to Kinky's to tell him the great news about Betty he was thrilled then he told me that he and Marcie had a surprise guest that they wanted me to meet. Then he asked me to come with him.

We left the Lodge and went to Marcie's white Annex, but before we went inside, he told The Friedmans to stay outside. Then we went inside. As soon as we walked inside I heard a kitten meow. "I hear the kitten," I said. "But where is it?"

"Where did the kitten come from?" I asked.

"Marcie, Winston and Chumley rescued it last night. It had come into the yard and was hiding under a cactus. It is a beautiful kitten. What do you think we should do?"

"I think we should take it to Hoegemeyer's, because it needs its shots and we should ask them to help us adopt it out. Tony and I are going to Kerrville after lunch and we could take it and drop it off." Then Marcie came inside the Annex and Kinky told her what I had suggested with the beautiful kitten. She thought it was a good idea, too. Then I came home and called Kathy at Hoegemeyers' to ask if they could help us adopt out the kitten.

After Tony and I ate lunch we drove over to the Lodge to pick up the kitten. While we visited with Kinky and Marcie outside, Kinky asked me, "What do you think we should name it?"

"Cactus," I said. "Because it was hiding under the cactus."

"Let's call it Cactus Jack or Cactus Jackie," I said. "Since we don't know if it is a boy or a girl."

When we arrived at Hoegemeyers with Cactus Jack/Jackie Kathy took the kitten from Tony and held it in her arms. It immediately began to purr. While we were talking about the kitten, Kathy said, "Listen, let us take over and adopt out the kitten. That way we won't have to charge the rescue ranch anything." Then  Dr. Rydberg came into the lobby and he told us it was a male kitten. So, the kitten's name is Cactus Jack. 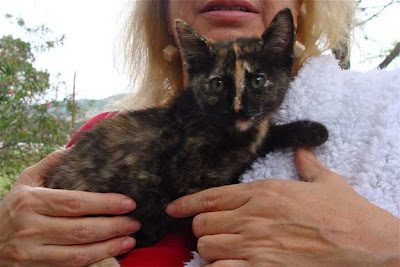 So, if anyone is looking to adopt a sweet ten-week-old kitten please call Hoegemeyer Animal Clinic. And that is about it for tonight.