Today has been great. This morning while I was cooking breakfast for Tony, Brandon and me, Brandon told me about his love for music and about him buying a full set of Hohner Harmonicas that were on sale at a box store, in Kerrville. "They had a keyboard too, that was on sale for sixty dollars and I am thinking about buying one, "Brandon said.

"No, don't do that, Brandon," I said. "I've got one or two keyboards stored in the barn outside. A good friend of mine gave me one that he found at a garage sale and the other keyboard is a really nice one that I bought several years ago. This afternoon when y'all finish working outside let's go down to the barn to see if we can find it. And if I remember correctly I also have a stand for it..."

Late this afternoon Brandon and I found the keyboards covered in dust. "The one I want to give to you is way up there." Brandon climbed over our kayaks to get it and fortunately, the 12 volt wall jack was still plugged into the back of it, but some heavy boxes were sitting on the wire and it would not budge. While I was holding the keyboard he moved this box and that box to finally retrieved the electrical wall jack.

He loved the Yamaha keyboard and he would not quit thanking me for it as we cleaned it up, in the kitchen. A few minutes later when he plugged the jack into the wall, the old keyboard looked brand new and it sounded great.

After he had messed around with it and figuring out what all it could do, we went back to the barn to see if we could find the black metal stand for it. We found the keyboard stand fast and he was thrilled, but I was even more thrilled, because I found my backup Eternal Squirrel! And the box had never been opened, so we opened it and sure enough it was brand new. 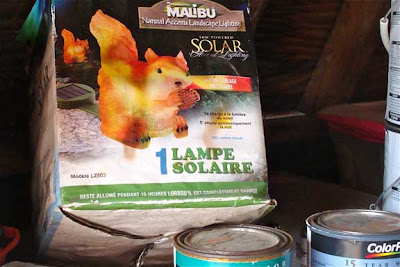 On our way back to the trailer I told him about the Eternal Squirrel cemented to Yoda's grave and not being able to find a replacement squirrel anywhere. "This has really made my day great...," I said.

After we cleaned up the keyboard stand Brandon put his new Yamaha keyboard on top of the stand and he started playing some Jazz. Then he thanked me again and again and again.

Forty minutes later, when Tony took Brandon home, I decided to rehang some signs on our newly painted front porch. When Tony returned home, he helped me drive the screws in further for me, because they were still sticking out about a quarter of an inch. Here are the before and after pictures of my project that needed Tony's help. 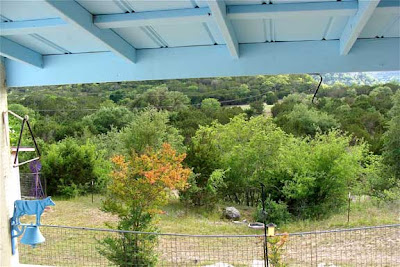 Y'all have a great evening!
Posted by cousin nancy at 6:47 PM