Today has been great, but yesterday turned out to be sad, because Toto, our sixteen-years-old terrier mix, had had a stroke the night before and he could no longer stand. We have known for a long time that his days were numbered, so late yesterday afternoon we took Toto to Hoegemeyers and had him put down. I miss Toto so much and I hope that my little buddy is at the Rainbow Bridge, waiting to be reunited with us. And that is all that I can write about Toto, because it makes me cry every time that I think about him.

Now on a lighter note, l received a phone call around 7:00 from a very nice woman named Sarah, who lived in Ingram. "Ten minutes ago, a beautiful yellow Lab walked up to my front door and he is wearing one of your dog tags." In less than a minute, I knew it was Gus and I asked the woman if she would let me call her right back, so I could call his owners, who also lived in Ingram.

When I dialed Heidi and Alex's phone number I got a recording saying that the phone had been disconnected permanently. I then called Sarah back and told her the news. Then I asked her if she could keep Gus for the night and at her convenience, Tony would pick Gus up today. She happily told me that that would be fine and for Tony to come around 10:00 in the morning.

Around 9:15 this morning Tony jumped into Buttermilk to go fetch Gus, while Brandon and I did the outside chores. When I was halfway done feeding the dogs, I was worried sick about not being able to find the owners, so I came inside and left a message at the Kerr pound, to alert them that we had rescued Gus, if anyone called them. Then I went back outside to finish feeding the dogs.

When Brandon and I were nearly finished, Tony returned with Gus, happily riding in the front seat. After he had put Gus into our emergency pen, he drove up to me and said, "Nancy, that dog has been well taken care of. We've got to locate the owners..."

After feeding the dogs I went back to The Cabin, because I had an idea about how to locate Gus' family. I looked at Alex and Heidi's address. The road they lived on was *&^%$ Lodge Road, in Ingram. So I Googled *&^%$ Lodge and found the Lodge's phone number.

"Hello, ma'am, this is Nancy at the Utopia Animal Rescue Ranch. Last night a woman....and we now have the dog here. He belongs to Alex and Heidi."

"We love Gus! Everyone here loves Gus. Thank god that you've got him. My daughter and son-in-law and their little girl have been worried sick about him running off last night. I'll call Heidi right now with the great news..." As soon as we adios-ed each other, I went out the front door and said to Brandon and Tone, "I've found Gus' owners!..."

Then I came back inside to wait for a call from Heidi or Alex. Ten minutes later, while I was teaching Brandon how to cook Salmon cakes—the phone rang and it was Alex. And he and his family were thrilled about us rescuing Gus. "We love that dog so much and we can't thank y'all enough for getting him back to us. We will be their in about forty-five minutes..."

While Brandon commanded the stove top, I grabbed my camera and went outside to go see Gus. After telling this super sweet dog about Alex and Heidi coming to get him, I stood back and took this picture of this very lucky dog. We rescued Gus from the pound on October 10, 2011. Adopted him out on Christmas Eve 2011 and then him being reunited with his family today. 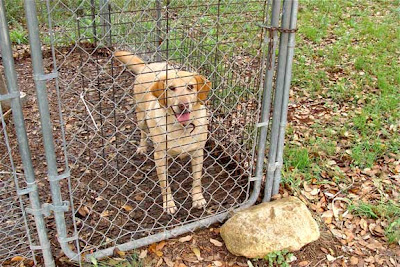 When Gus' family arrived, Alex and Heidi got out of their car and hugged me and thanked us, as Gus wagged his tail and barked happily inside the small pen.

After Tony and I had told them the whole story about Sarah, Tony mentioned where she lived on Junction Highway and they could not believe it. "Oh my god, this gives me cold chills, Heidi said. "We know exactly where she lives, because three days ago, we rescued her family dog that had shown up at the Lodge."

"What? You've got to be kidding?" Tony said.

After Tony told them Sarah's name and how nice she was, Heidi said, "Before we take Gus home we are going straight to Sarah's house to thank her for rescuing Gus..." Then they loaded up their happy dog and we adios-ed each other and they drove off to go thank Sarah.

Brandon did a great job cooking the Salmon cakes and our lunch was delicious and fun. Then he and I picked and grinned for about one hour, before Brandon and Tony went back outside to work. And that is how this happy story ends tonight.

Y'all have a great evening!
Posted by cousin nancy at 5:55 PM

I am so sad about Toto´s passing because I knowed him. He had a beautiful life with you and Kinky and you will see him again!

Hi Karin. Thank you for your comment. There is a big void here.

Godspeed Toto! You were one fine dog and I will miss the stories that Nancy writes about you.
Nancy & Tony, sorry to hear of the loss of your Toto, he left you with many good memories.
Fay

PS: The Captcha I had to type out to post this made me laugh: Tapioca Juaryns. Sounds like a name for the next white Chihuahua that arrives Nance! LOL

Hi Fay. Toto was such a great dog. I like your name for our next Chihuahua. : )