Today has been fun. This morning after I posted Fay's rave review and her pictures of Kinky's performance, last night in Toronto I returned phone calls, e-mails and did paperwork—I tweeted, even though I am still not comfortable tweeting and not sure if I am doing it right.

What I tweeted about was the cool article in the National Post this morning about Kinky, that Fay sent to me, followed with a link to my blog, so Kinky fans could read Fay's note and see her pictures. Then I fixed the leftovers that Tony cooked for me last night, on Brink.

This afternoon Kinky called me from Milwaukee, again and he is really looking forward to performing tonight at The Shank and before we hung up I once again said, "Break-a-leg, Kink." He was chuckling when he turned off his cell phone.

Around two o'clock I half-hollered down the hallway, "Tony! Let's take Belle on a short trip, down to the creek, to see if she likes to swim! It will be a good experience for her to take a ride in Trigger and have some fun." There was no answer, so I went to T.'s office and repeated my words without hollering.

When Tony picked up Belle Starr-Simons his back nearly went out, because Ms. B.S.-S. has been growing in leaps and bounds and she has put on quite a bit of weight. When Tone put her on the front seat—she wasn't real happy, because I bet she thought she was going back to the doctor's office, but we quickly surprised her and she didn't vomit!

As  soon as Tony parked Trigger, under a tree, we got out of the truck and took her down to Wallace Creek and she immediately ran into the water and started playing in it. "Tony, you've got yourself an aqua pup," I said. "Look at her. She loves the water..." As we played with Belle in the water, she became one-with-water and actually swam for about ten seconds and T. and I were thrilled that she is a water dog. Here is a picture that I took of her wading in the creek. 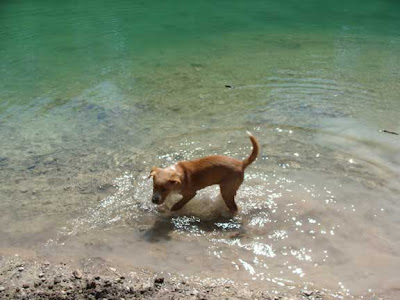 Thirty minutes later we safely returned Belle to the trailer and we were so glad that she didn't vomit on me. Tomorrow we plan to take Belle on a short drive around the ranch and hopefully her fears of something bad is going to happen to her whenever she gets into a vehicle—will vanish quickly and that soon she'll look forward to going for a ride whenever she can. Wish us luck.
P.S. If you haven't read Fay's fun review—it's below this post.
Y'all have a great evening!
Posted by cousin nancy at 7:18 PM