Today has been great even though it didn't start out so great. This morning we woke up and were without water because a pipe broke outside. So that caused Tony to be a little late getting to Medina, to drink coffee with his friends at the Old Timer.
After cleaning up our breakfast dishes I volunteered to clean the dog pens outside for Tony because it allows me to spend more time with our super dogs and also because it always puts a smile on his face and mine.
When I was cleaning (pickin' up poop) Frank came over. "Happy Birthday, Frank!" I hollered from Walter Cronkite's and Lulu's pen. "T. and I want to take you out for lunch today to celebrate your sixty-seventh birthday. And you get to pick the restaurant..."
A few hours later we walked into the Chinese restaurant that's across the street from Albertsons. An hour later we were walking down the isles at H-E-B to grabbing some groceries. Thirty minutes later I was in the Quiet Valley office buying Kerrville Folk Festival advanced tickets for T. & me for their June 5th concert, featuring Shake Russell, Ray Wylie Hubbard and Asleep At The Wheel.
When we got home Carlton had six new messages for me. Two were from Kinky, but the most important one was from a woman who had rescued Paul McCartney in Austin, so I called her first. "Hello, this is Nancy at the rescue ranch. I'm sorry that I missed your call. The dog you have is Paul McCartney and he belongs to..." Five minutes later the woman called me back to tell me that Paul's parents had just come by and picked up Paul. Then I called Kinky on his cell phone, as I opened up a surprise package from my friend Cathie Bernhardt.
"Hi, Nance. I'm going to be home earlier than planned. I should be back at the ranch tomorrow around four o'clock..." His news thrilled me because it has been over three weeks since he left the ranch to go do his tour and I have missed him, but what Cathie sent to me thrilled me even more.
Cathie sent me some Prismacolor Art Stix and Prismacolor Scholar art pencils for my future watercolor paintings. And hopefully tomorrow I will have time to paint another fasterpiece. Thank you, Cathie. I love them. Please tell Donna and Robert howdy for me. 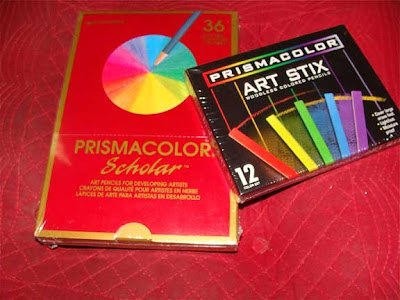 I am now fixin' to watch "The King's Speech" and I can't wait to see it, because I have a secret crush on Colin Firth.
Y'all have a great evening!
Posted by cousin nancy at 8:08 PM

you are welcome nancy...fun to put somehing fun in the mail to make you smile. you made us smile too!! you will enjoy using them with your great landscapes and dog portraits. you are proving fast can be fun:) cathie b.