Today while Belle Starr-Simons was at Hoegemeyer Animal Clinic getting her stitches removed—Tony and I ran a few errands around Kerrtown. Our first stop was at Wolfmueller's Books so we could say howdy to Sandy and Jon.

When we walked inside their famous Texas bookstore they were busy helping their customers find books so we decided to wait and started browsing their bookshelves. After they had checked out several customers we had a fun, but short visit with them before a bunch of tourists suddenly showed up.

While shopping at H-E-B I made a decision that I hope I won't regret. "Tony, when we leave here I want to go over to Home Depot and buy myself a small gas grill, that I can operate, so I can start cooking outside."

"But Nance," T. said, as we walked past some sacks of charcoal on sale, "we have our giant barbecue pit..."

"Yes, you do have a giant barbecue pit and the lid is so heavy I can barely lift it and with the burn ban in effect because of the drought—we can't use it. Tony, I am buying myself a small gas grill today, so lets get some shrimp, vegetables and beef, so I can cook on it tonight." Then we went around H-E-B filling our shopping cart with "grill food."

When we arrived at Home Depot it took me only five minutes to pick out my cute, little gas grill, even though Tone tried to talk me into buying one much more expensive and four times bigger—that would for sure impress his men friends. "Nope, Tony. This is the one I want and I am going to name it Brink or maybe after Yoda, because she was so gaseous..." And I bought it.

After picking up, one happy-to-see-us, Belle Starr-Simons from Hoegemeyers we headed home in Trigger—with Brink standing small in the back of the pickup. Right before Belle vomited on me, we made an emergency pit stop at the Mini-Mart, because Brink was on the brink of falling down or out of the truck, because T. hadn't tied him down good enough. And while Tony was retying-down little Brink to Trigger our good friend James walked up. "Hi, Nancy and Tony. Carol's working and I'm out running errands. When I saw y'all— I just had to stop and say hello. Hello, pretty Belle," James said, as he patted her on her head. "She is so sweet..." Before we took off in opposite directions James told us that their herd of cattle were settling in nicely and in a few weeks they would be ready for me to be their official Turnback Rider or as I like to say, "Herd Turner."

When we got home Tony put his dog inside our front yard so she could go potty. Then we carried our groceries up the stairs to the trailer and put them up. While I was busy preparing my first outdoor "grill dinner" Tony was outside hooking up Brink to his propane tank. When he was done I went outside and shot little Brink. 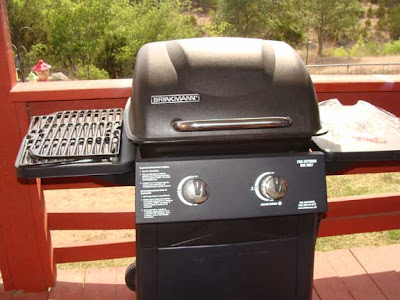 Then we came back inside so I could finish preparing the shish-kabobs while Tone made my "Cousin Nancy's Bacon Wrapped Bananas" appetizer recipe. Then he did the weirdest thing—he took his plate of bacon wrapped bananas and went outside, while I cut up some fresh strawberries for our dessert.
When I came outside Tony had a big smile on his face—as he cooked on my grill, Brink! And, "I like Brink!" Was all he had to say, as he happily turned over the appetizers. A few minutes later while I was on the phone inviting Frank, who was over at the Lodge babysitting The Friedmans, to join us for dinner, T. came inside and casually carried out my platter of shish-kabobs.
After I had returned several phone calls I went outside, just as Frank was walking up to the trailer. "You're just in time, Frank," Tone said. "We're ready to eat." And that is when I ran back inside the trailer and grabbed my camera so I could shoot Tony on the Brink. 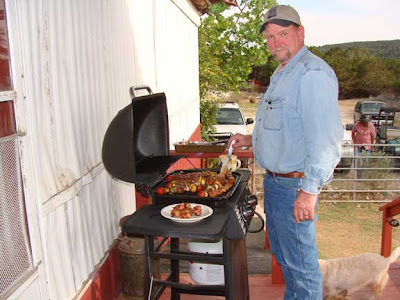 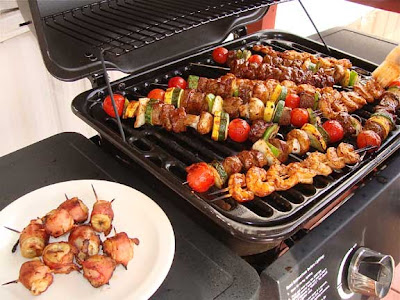 Our dinner was delicious and there was a ton of leftovers, and I am actually glad that T. and Brink like each other and are coal-mates, because it is so much fun to have your husband cook dinner for you. I knew it would work!  : )
Y'all have a great evening!
Posted by cousin nancy at 9:16 PM